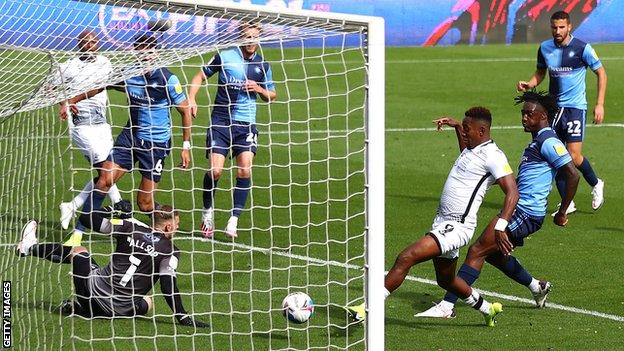 Jamal Lowe bags his first goal for Swansea City since his move from Wigan.

Steve Cooper saw Swansea City set a club record in the 2-0 Championship victory at Wycombe Wanderers – then urged the owners to match the ambition off the pitch.

The shut-out made it the first time in Swansea’s 100 year history that they have started a league season without conceding a goal in the first three games.

Andre Ayew and Jamal Lowe, with his first goal since his summer move from Wigan, struck in the first-half as Cooper’s side made it seven points from nine.

“I knew the stat about three in a row as Joe Rodon had mentioned it to me, and it’s good to have done that,” said Cooper, who knows he needs to bolster his squad for a 46-game campaign.

Nothing better than getting three points and MOTM 🤝#YJB pic.twitter.com/ApUuEhNpfl

“To get three clean sheets on the bounce is good, especially playing the way we play.

“But we don’t want to look back, we have to look forward.

“I’ve talked about what we’d like to do ourselves in terms of players coming in, but also I don’t want to lose any players as well. I don’t think we can with the numbers that we’ve got.

“I think you can see a hungry set of lads there. Nobody’s playing like they don’t want to be here. Hopefully that’s the case.

“If we end up doing nothing in terms of ins, then I’ll get on with it because I really believe in this set of players.

“The only thing I’ve made clear is that, if we’re very serious about what we want to do, then, for me, some things need to happen.

“Whether they do or don’t, we’ll see. But the first day after the transfer window ends will be the same as any other day, and that’s working with the players who are ready to train and getting them ready for the next game.”

Cooper knows he needs to add to Swansea’s strike power before next month’s transfer deadline despite the impressive start.

Ayew steered home his first goal of the season as he slid to meet Jake Bidwell’s cross on 13 minutes.

Gibbs-White continued to impress in an unchanged line-up from last week’s home draw with Birmingham.

Ayew was then denied a second but it was no suprise when Lowe doubled the lead on 23 minutes after being set-up by Ayew.

Connor Roberts saw a penalty appeal turned down after the break and ev en though the Swans eased off the gas Freddie Woodman had little to do between the sticks.

“I have said before that to keep a clean sheet in the Championship is no mean feat, so to be able to keep three in a row is excellent,” added Cooper.

“The challenge now is to try and keep that going in the next game.

“There’s no easy game in this league – nothing is ever straightforward – and I thought we played some excellent football first half.

“The only challenge for the players is that I guess we should have scored a few more because of the amount of good play we had.

“Second half we really wanted to go and kill the game, but there are lots of positives from the game – two strikers scoring, two wingbacks involved again, lots of good chances and a clean sheet away from home.

“We are not a team that sits on the edge of the box, we are a team that wants to be at the other end of the pitch.”

“We are defending well as a team, and don’t underestimate how important the work and running Jamal, Andre and Morgan (Gibbs-White) do up the top of the pitch putting pressure on defenders and forcing them to go long.

“It helps out the backline, the midfield are competing well and the boys at the back are defending for their lives.

“We played well on and off the ball.”