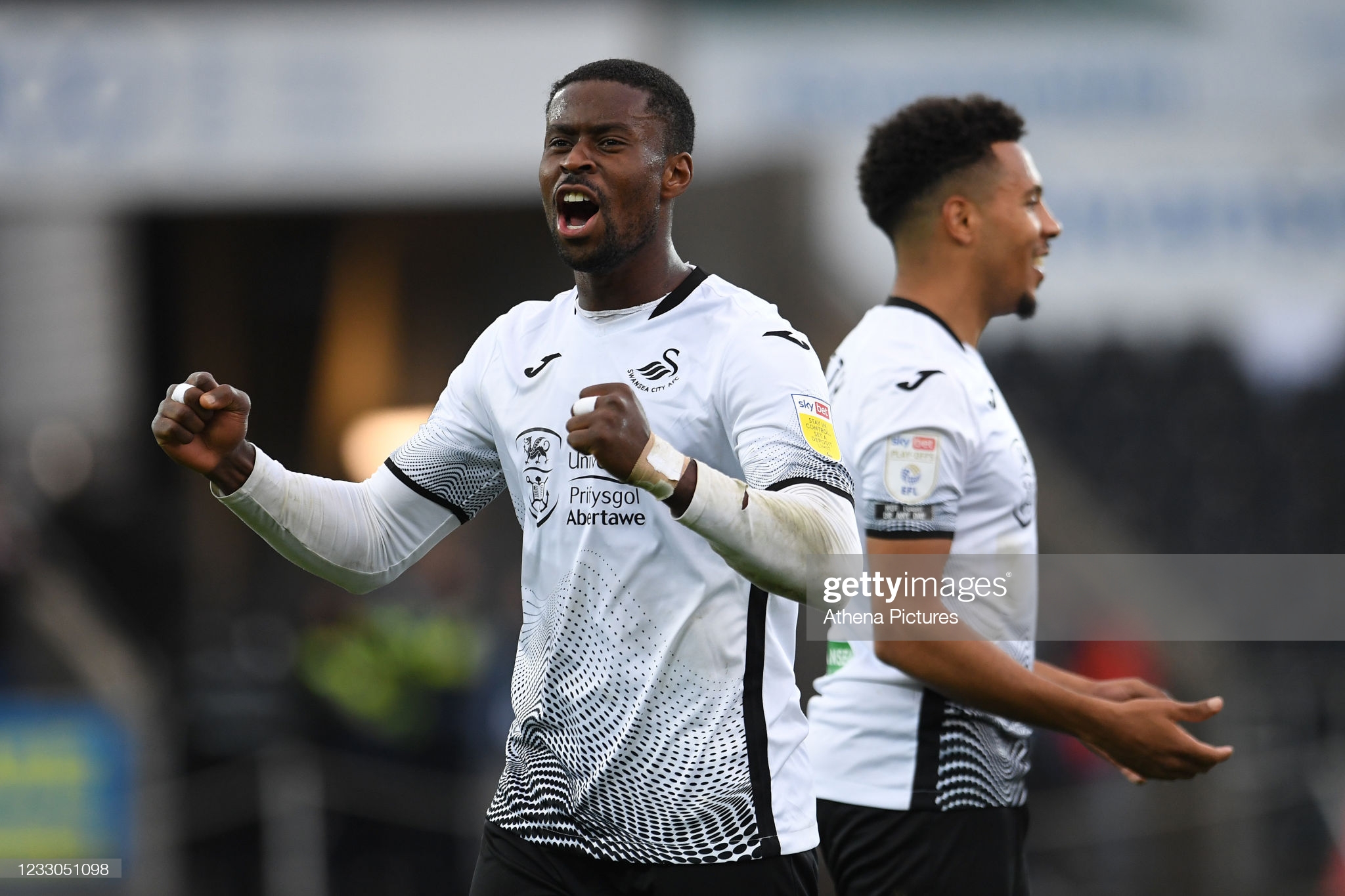 Swansea City manager Steve Cooper insisted, “3,000 felt like 35,000” as he praised the impact of the supporters who returned to the Liberty Stadium to see the hosts reach the Championship play-off final.

Leading 1-0 from the first leg, Matt Grimes spectacularly doubled that advantage before the break but then Cauley Woodrow’s second half strike set up the inevitable, tense finale.

At the final whistle, joy and relief was evident in equal measures among Swansea players, coaches, and most notably, fans.

After 39 minutes where the surrealistic notion of the returning crowd outweighed on-field quality, it was Swansea captain Grimes who turned tension into ecstasy.

Connor Hourihane’s free kick was palmed away by Brad Collins to Jay Fulton – who teed up the midfielder to jink past Callum Brittain on the edge of the area and curl a sublime left shot into the top corner.

But as the second half wore on, the action delved increasingly towards the Swansea area and with 20 minutes left, Barnsley substitute Jordan Williams burst forward and pulled the ball back to Woodrow, whose excellent first time shot beat Freddie Woodman.

The expected late barrage of balls into the box duly arrived, but with Marc Guehi and Ben Cabango seismic at the back, the Swans held on to set up a play-off final with Brentford at Wembley next Saturday.

Indeed, the night was only tempered by an injury to Wayne Routledge, with the veteran winger almost certain to be ruled out of next weekend.

“They (the fans) were amazing and they got us over the line tonight,” said Cooper afterwards.

“Watching the game 3,000 felt like 35,000. The club did a brilliant job in how they structured it and the supports really represented themselves, and the ones who couldn’t get in the stadium, like Swansea City supporters do – and that’s being loud and proud.

And Cooper also acknowledged his side were made to fight hard by a Barnsley side that stuck to their trademark, direct style.

Swansea set up a Wembley date with Brentford as they saw off Barnsley 2-1 on aggregate in their Championship play-off semi-final.

“We showed a lot of character and determination over the last two games.

“Respect to Barnsley and the journey that they’ve been on this year. They’ve been as in-form a team as anybody in the second part of the season.

“They test you in a different way. It’s hard to play against and it’s hard to get rhythm in.

“So we knew we had to do certain parts of the game well, and we did. What I like about that is that, fans back in the stadium for the first time, people being away for 14 months.

“We’re going through a pandemic and they’re seeing a team that’s just fighting and giving everything they can for their people. That’s important to me.”

But despite his side now being just 90 minutes from the Premier League, the manager insisted there would be no getting carried away.

“Of course I’m proud. You’ve seen the journey of this football club, not just the two years I’ve been here. It’s a unique one, another chapter.

“But it’s not finished, we’ve got another one next week. It was a privilege to be in the stadium tonight, fans being away and getting to Wembley. It’ll be a night to remember but I also know my biggest emotion is getting ready for next Saturday.

“As soon as I get home the laptop will be on and I’ll be looking at the opposition.”

For his part Barnsley manager Valerien Ismael, who has instigated a huge turn around since taking over at the club last October, was dignified despite the disappointment.

“Congratulations to Swansea they deserve to be in the final,” he said.

“They were really clinical, they scored with one goal in each game with one shot, but they were also very disciplined.

“We are disappointed, but everyone in the club can be proud. Now is a time for everyone just to reflect and that includes me.”

Next Saturday will represent Swansea’s third clash with The Bees this season, having drawn 1-1 in both of the two league games.