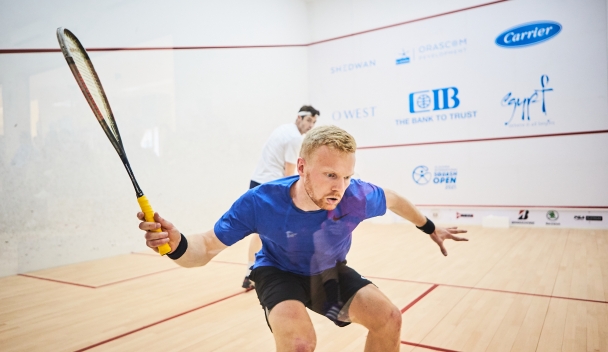 Joel Makin raced into the last 16 of the El Gouna International Open in Egypt with a straight sets victory over England’s Adrian Waller.

“The score was very close, especially in the first game,” said Makin, seeded seven for the event and who had a first round bye, told PSA World Tour.

“Adrian has got a very high skill level, he’s got a lot of options on the ball, he’s got a nice simple technique, he can hold and when he is holding he can keep me back behind him, so it was difficult with his height as well.

“I know he’s been out with a knee injury for a long time, so he is not as sharp, but it doesn’t make a big difference with Adrian because you’ve still got to control the squash. If you don’t, he will put you behind him and with his span he doesn’t have to do a lot.

“When I was lower down, we had a lot of hard matches together, so I was well aware it was going to be hard.”

Birmingham-based Makin reached the semi-finals of the Black Ball Open on his last visit to Egypt where he lost to Marwan Elshorbagy.

But he is aiming to take the next step up the squash ladder and claim a major international title.

“I’ve got to the semi-finals a few times now and going to the latter stages,” added Makin. “I’m coming to these to get a tournament title, I want to win these now.

“The field is obviously quality, Marwan is in form, (Fares) Dessouky is in form, but I don’t think they are not doing anything I cannot beat this week.

“I’m sharp, I feel good and I was one point away from taking the first game against Marwan (at the Black Ball Open). His body was struggling, and I think I could have been through the final had I taken that game.”

But there was disappointment for Wales’s world No 10 Tesni Evans who suffered a second round upset against the world No 36 Sivasangari Subramaniam.

Evans fought back to lead 2-1 but the 22-year-old took the next two games to triumph in 49 minutes.

“Obviously I played very well in the first game, I was really warmed up and very comfortable,” said Subramaniam afterwards.

“But in the second and third, I was giving her plenty of errors. She was not winning, I was just giving her points and it was very frustrating.

“From the fourth game on, I told myself I have the fitness, so I was just going to keep pushing the ball back even if I had the opportunity to volley.

“That worked well, the rallies were going longer, and I think she was feeling it too. It’s a good win, so I’m happy to be back.”

Emily Whitlock, Wales’s World No 28, faces No 6 seed Hania El Hammamy in the second round.