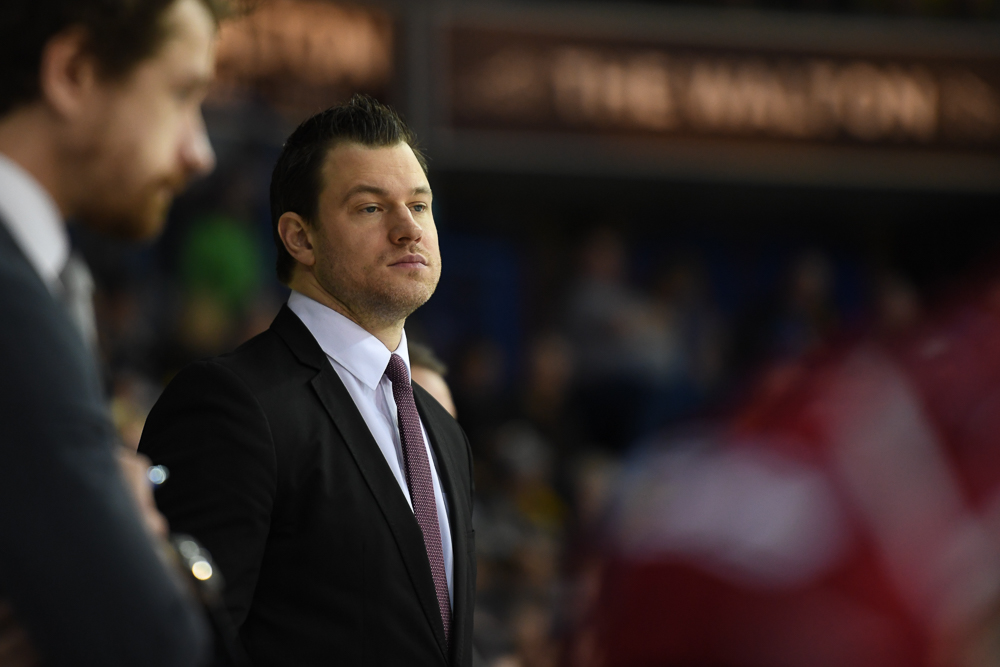 As the Cardiff Devils continue their search for a new head coach to replace Andrew Lord, managing director Todd Kelman has admitted he has a big job on his hands. The most successful coach in Devils’ history after seven years in charge – who left to join Greenville Swamp Rabbits in South Carolina – is casting a long shadow across the ice, says Matthew Burgess.

Sometimes in sport, people pass through teams as part of their journey to great things.

It’s been two weeks since his tearful departure was announced, but Andrew Lord passing through the Cardiff Devils feels quite like one of those times.

In time, we will learn the true trajectory of Lord’s career as a coach in North America, but the impact he leaves on the minds of the Cardiff Devils and its fan base evoke emotions of awe and admiration.

Nobody could deny or challenge Lord’s decision to return to North America to continue his coaching journey.

Greenville Swamp Rabbits of the East Coast Hockey League (ECHL) – essentially, the third tier of hockey in North America and an affiliate of the NHL’s Carolina Hurricanes – are his destination.

A team who’ve failed to meet their own expectations for multiple seasons might well be on the road to success, and Lord’s own career path now has a clear route to the pinnacle of the sport.

Back in Wales, the Devils adapt to life without him. Citing Lord’s departure as inevitable, during the team’s official announcement of the decision, managing director Todd Kelman and the team’s Canada-based board of owners are tasked with filling the head coach vacancy.

A part of that process will be working on the acceptance that in many senses they are simply not going to be able to replace Lord.

The more I listen and read comments from those who have spoken about their connection to Lord during his time on Cardiff Bay, the more he sounds like the prototype of a model coach.

The same array of qualities and characteristics from a young coach, who is still only 35, keep being repeated: his desire, leadership, determination, his work-rate, tactical knowledge, ability to make players better, personal qualities and attention to detail.

The results speak for themselves in the form of nine trophies being delivered in six seasons – and the run of silverware was showing no signs of drying up before the 2019/20 season was cut short.

Remarkably, this was also Lord’s first coaching appointment, and even that was unique due to him being appointed as a dual player/head coach, something unheard of ice hockey.

Again, despite his inexperience, he rose to the challenge before eventually hanging up his skates.

On the ice, as a player, Lord’s infectious high intensity style made him a popular figure among teammates and fans alike.

He enjoyed a respectable career as a pro ice-hockey player, but everything points to him making an even bigger mark on the sport from the bench.

The Cardiff Devils will look back on this remarkable era with great pride and Lord’s emotional departure leaves little doubt that they, too, have left their mark on him.

Hockey will look quite different when it does eventually return to these shores – not least for the Devils who are presiding over their next steps after assistant Luke Piggott also announced his departure recently.

Piggott – who sat at the right hand side of Lord for the past three seasons – confirmed he was leaving, having accepted a “once in a lifetime opportunity” to work as a senior scientist in Switzerland. It leaves the team seeking a brand-new management team for next season.

Piggott combined his commitments with the Devils whilst working as a stem-cell scientist, researching cancer and departs after 10 years’ service with the team.

Piggott originally played for Cardiff’s ENL side for seven years before getting the opportunity to move up to play for the Devils in the 2011-12 season.

He ended up playing six full seasons for the Devils before becoming player/assistant coach in 2017-18.

With no announcement made on a provisional start date for the Elite League, the Devils first games of the new season could be in the Champions Hockey League against Sweden’s Farjestad Karlstad on October 6.

Whether they can build on the most recent trophy-laden success of the Lord-Piggott era remains to be seen.

They will be two large pairs of boots to fill.