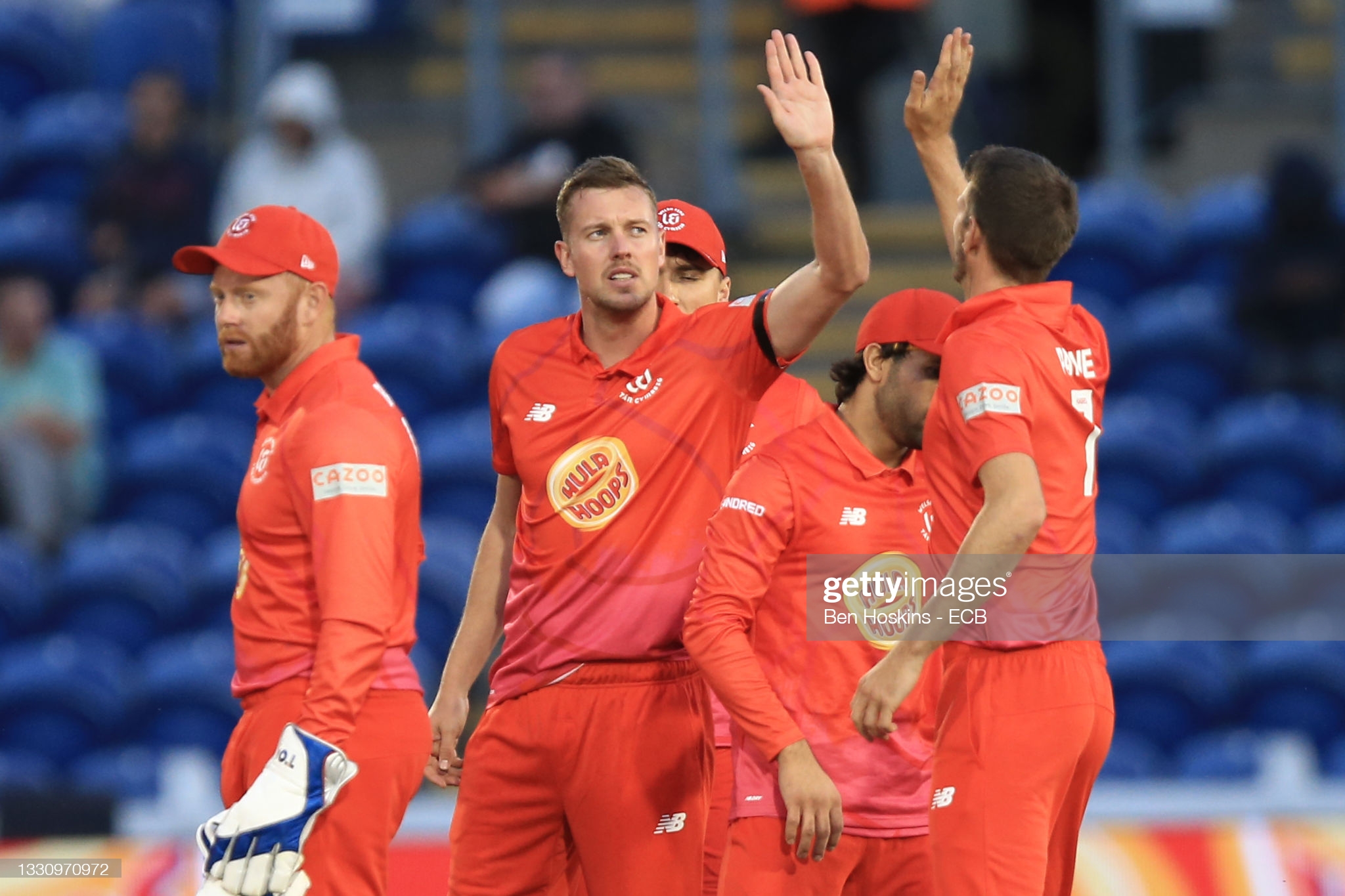 Welsh Fire are blazing. The men’s team have played twice and won twice and sit second of the eight teams in the early table. It’s not quite ignited yet for Welsh Fire women, who have lost both opening fixtures, but approval ratings for The Hundred generally have been high. Fraser Watson is a hard man to please, but even he thinks something significant is going on in the old sport.

After 86 balls of the run chase, with the Southern Braves still needing 29 to win a pulsating contest, Chris Jordan shaped up to put Jimmy Neesham into the stands.

He contrived only to slice it to Josh Cobb at extra cover – a catch which essentially secured a second straight Welsh Fire win.

Now, to single this moment out from a contest where Jonny Bairstow plundered 72 off 39 balls, Ben Duckett struck a magical half century, and Quinton de Kock hammered 21 from his opening six deliveries may seem peculiar.

But it was Cobb’s catch which perhaps yielded the defining image, and noise, of the night.

The subsequent roar, albeit deriving from a crowd shrivelled by Covid-19 restrictions, and the vision of red-shirted youngsters on their feet whilst adults embraced in celebration, would have triggered ample disdain from the purists and cynics.

As for all the misgivings about a concept flying in the face of tradition with five ball overs, modernised terms, and impromptu time-outs, here in Cardiff we had a fan base engaged.

Indeed, there’s been little room for fence-sitting in the build-up to the ECB’s grand new venture.

If you haven’t been waxing lyrical about the glut of global superstars heading to these shores, or, hailing the overdue arrival of a franchise cricket model, then you’ve been mourning the arrival of commercialised nonsense. Another rashly thrust dagger, some say, to the heart of a sport where instructions about line and length and a big stride forward have long been rendered outdated.

Structurally, things remain far from perfect. Covid-19 has scuppered us seeing Steve Smith and Meg Lanning In Cardiff for a start.

A maximum of 4,000 tickets were sold for this particular clash, though many had their purchases returned when restrictions dictated only a capacity of 3,021 was feasible.

The decision to run the women’s games prior to the men’s at all venues reflects admirable intentions, but a start time two hours before many ticket holders finish their working day ensured many took to their seats during, and not before, as the Southern Braves prevailed by eight wickets.

But the intrigue in indulging in something new was evident. Besides, the insertion of the term “Welsh” in the team name was always going to appeal to some fans who have long embraced sketchy colloquialism.

“Waqar is a Welshman” went the song, courtesy of his stint at Glamorgan. Jacques Kallis wore the red of Wales in a one day friendly against England. As did Michael Kasprowicz.

Mathew Maynard and David Lloyd aside, little about this side related to its host nation but the home venue, and astutely chosen name, inadvertently means we’re happy to have them.

And few would have left Sophia Gardens on Tuesday night grumbling about local representation, or bowlers churning out back-to-back overs, or why James Vince was introduced as a “batter”, or why there was a void of textbook forward defensive shots.

Like myself, they would have left exhilarated at seeing Tom Banton smash Danny Briggs back over his head for six twice within the opening three balls.

Or at seeing Duckett scoop Craig Overton into the stands. At seeing Bairstow hammer 10 boundaries.  At seeing Jimmy Neesham take 3 for 5 in 15 deliveries.

At seeing names like Mills, de Grandhomme, de Kock, Vince, and Jordan performing in Wales. And ultimately, at seeing their newly adopted team come through an exciting conclusion by 19 runs.

And this is why The Hundred has thus far defied the doubters in Cardiff and beyond. When you strip everything back and concentrate on the action in hand – exhilarating cricket is on show.

For all the rule tweaks, the concepts remain the same. We have world class players in both the women’s and men’s matches trying to play shots, take wickets, defend totals, and ultimately score more runs than the opposition.

That’s essentially what limited overs cricket is, even if it’s not quite as we know it.

Of course, to laud The Hundred without inhibitions involves no shortage of blissful ignorance.

The threat of long term damage to the domestic game and already underwhelming T20 Blast is substantial.

The affiliation with KP Snacks still seems a little strange.

When Jos Buttler is caught scooping with England 50 for 5 at Trent Bridge next week we’ll be lamenting a generation whose batting is void of discipline.

And for all the excitement produced thus far, we should perhaps be cautious of championing progression in a format which as far as the international stage is concerned, doesn’t actually exist.

But maybe, if we’ve learnt anything about life since March 2020, it’s to enjoy a good thing while we have it.

And for all its caveats and detractors, few can deny that right now The Hundred is captivating both its live and televised audience.

And why wouldn’t it?

After all, it’s just cricket. And very good cricket at that.