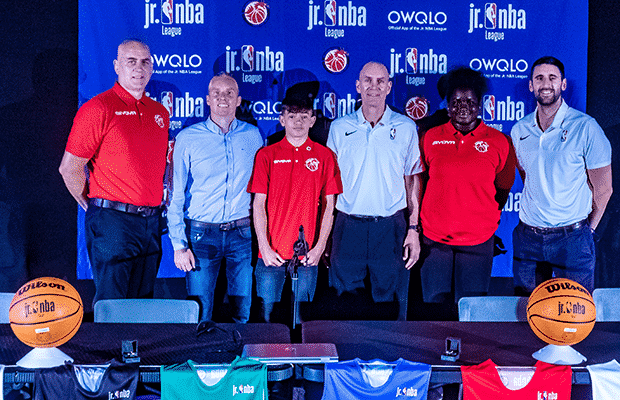 Los Angeles Lakers, New York Knicks and Chicago Bulls are all legendary NBA teams and young Welsh basketball players will soon have a chance to represent them, as Tom Prosser reports.

Michael Jordan and LeBron James are global sporting icons but soon there could be a pathway to such NBA legends that starts here in Wales.

Basketball Wales and the NBA are joining forces to create a new league right here in Wales, that could one day mean the sport’s major stars of the future are produced somewhere near you.

This new venture is part of the Junior NBA initiative and will be run as a schools-based tournament, which is open to boys and girls who are aged between 11 and 13.

Caelan Carson-Jones, 14, who plays for Swansea Storm Basketball Club and is a potential Welsh basketball star of the future, is urging young people to get involved in the league by spreading the word to their teachers in school.

“It only takes one word from you or your friends,” says Caelan.

“You should go up to your PE teachers and tell them that the NBA have got involved with schools in Wales.

“I’m sure they will only be too happy to enter a side into the tournament.

“There’s no charge involved and I’m 100% sure it will only be a positive for young people.”

One of the big attractions of the NBA link up is that all the schools will be aligned to one of America’s top teams. This will be randomly decided at a ‘draft’ event in Aberystwyth in November.

It means the young players will be able to wear the same kit as NBA sides such as James’s LA Lakers, the Chicago Bulls – where Jordan became arguably the world’s biggest sports star – or the Brooklyn Nets and their star man Kevin Durant.

From inspiring young Welsh players by wearing the same colours, Junior NBA hope they can go on to stick with the sport and access their development pathways into college basketball in the USA.

One of the tournament’s main aims is to promote key values such as respect, enjoyment and the importance of keeping fit.

With coronavirus restrictions now easing, Caelan thinks this is the perfect time for young people to take up a new sport such as basketball.

“I obviously missed playing as I’m used to playing three times a week so to not play at all for a while was not ideal.

“I couldn’t wait to get back playing and I’m sure there are many more young people out there who can’t wait to play sport again, too.

“There’s always a basketball hoop somewhere in your community, so everyone should give it a try.

“I’ve had so many different opportunities to travel all over the world through basketball.

“It can open up so many new doors for young people like myself.

“When I first started playing, I didn’t know much about basketball.  I just saw it on TV and thought this looks cool, I want to give it a go.

“It’s just practice makes perfect. Nobody starts at the top, you’ve got to work your way up.”

Another aim of the league is to create opportunities for young people to learn new skills, which they can then take with them as they go to university or apply for jobs in the future.

Welsh international Funmi Oduwaiye,17, who plays her basketball for the Cardiff Met Archers, is now too old to play in the tournament but she is looking forward to getting involved as a volunteer.

“Even if you are over 14 years of age, you can still sign up to be a volunteer like myself,” says Funmi.

“It will be so much fun. Everything to do with this scheme is new, fresh and different.

“You can get involved with officiating, coaching, media work and so much more.

“I think it will help so many young people with their confidence, communication skills and you will get to make so many new friends.”

“Basketball is a fun sport. I know people who like football won’t admit that, but I think it’s the best sport going.

Jon Bunyan, who is the NBA Jr project lead for Basketball Wales, is keen to include schools from all areas of Wales and also plans to open the scheme up to disability sport.

“It has taken a lot of hard work by a dedicated group of people to get us to this point and we are all delighted that the NBA have approved our plans for the league,” explains Bunyan.

“Over the next few years, we will be developing the Jr. NBA initiative to include a girls’ only league, a wheelchair competition as well developing links with youth sports organisations.

“Our ambition is to grow the competition so that many more schools can participate, and more young people can get the chance to play basketball.”

Similar to the NBA, teams will be divided into two conferences- North and South.