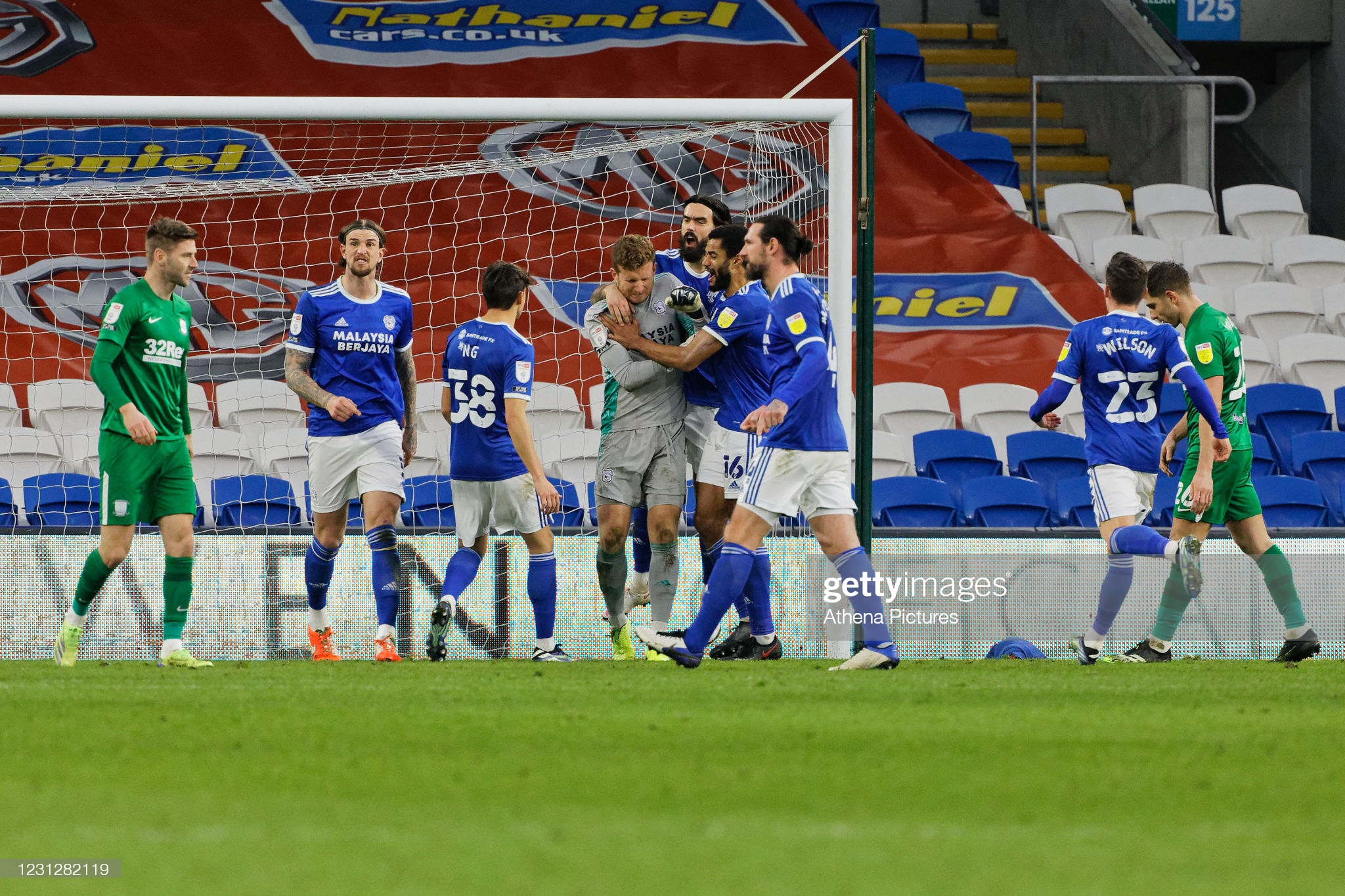 Dillon Phillps is congratulated after his double penalty save for Cardiff City. Pic: Getty Images.

Cardiff City have been blessed with a number of very good goalkeepers over the years, but none, surely, can boast a starting record like Dillon Phillips.

The man likely to be in goal for the Bluebirds at Middlesbrough today has given manager Mick McCarthy a welcome selection quandary since Phillips took over from Alex Smithies.

When Phillips joined Cardiff from Charlton for an undisclosed fee in the autumn of last year, he had to show considerable patience.

He made his debut in an FA Cup tie at Nottingham Forest in January, but his big break came at Bristol City at the start of this month, when his rival Smithies had to leave the field due to the effects of a mystery virus.

Phillips, 25, palmed away a free-kick seconds after coming on and kept a clean sheet as the visitors won 2-0.

The trend is no fluke, either.  The 6ft 3in Hornchurch-born player had the second-highest number of recorded saves in the Championship for Charlton last year.

His shot-stopping ability was a crucial factor in the midweek win at Bournemouth, with a strong left hand stopping who looked a certain goal from a well hit Junior Stanislas shot, around the hour mark.

Whilst it did not gain the same number of headlines as his double penalty saves in two minutes against Preston – he now has seven penalty stops in facing 16 spot kicks –  it was as important, if not more so, as Bournemouth were definitely building momentum at that stage.

Whilst the Cherries did eventually beat him in a 2-1 scoreline, it could not stop his team from extending their winning run to six matches – a sequence that only Manchester City can claim as inferior to their own.

Asked about the competition between Phillips and Smithies, McCarthy said: “Great, isn’t it?! That’s the best dilemma for a coach. Two players fit and well who want to play.

“Alex understands. Dillon has been great, that’s just the way it is. One of them has got the shirt at the minute.

“Alex has been great, very supportive. He will understand. I haven’t asked him, but I know he doesn’t like being left out!

“I haven’t got any favourites. But why on earth would I change it?”

Phillips is currently flying high but it’s not always been this easy for him.

He signed professional terms in 2013 with Charlton, a team he had been with since he was eight years old.

As a young – especially in goalkeeping terms – professional, he was soon out on loan and had spells in the National League and Conference before eventually making the number one spot in Charlton his in the 2018/19 season.

That first full season saw him help Charlton to promotion from League One, but the London outfit were relegated in their first season back in the second tier.

Despite the relegation, Phillips was the Addicks’ player of the year but at the start of the current season he was dropped by manager Lee Bowyer after refusing to extend his contract at the club.

Whilst Phillips has gone on record stating his warmth towards Charlton, it is clear that he believed his talents belonged in the Championship and it was no surprise that a number of clubs from that division were interested.

Interestingly, one of the teams believed to have had an offer for Phillips turned down last summer were Middlesbrough.

If former Cardiff manager Neil Warnock plays classic Warnock ball, then Phillips could be in for a busy afternoon.

However, with an increasing confidence in him and the central back three, McCarthy may well feel a seventh successive victory is just around the corner.