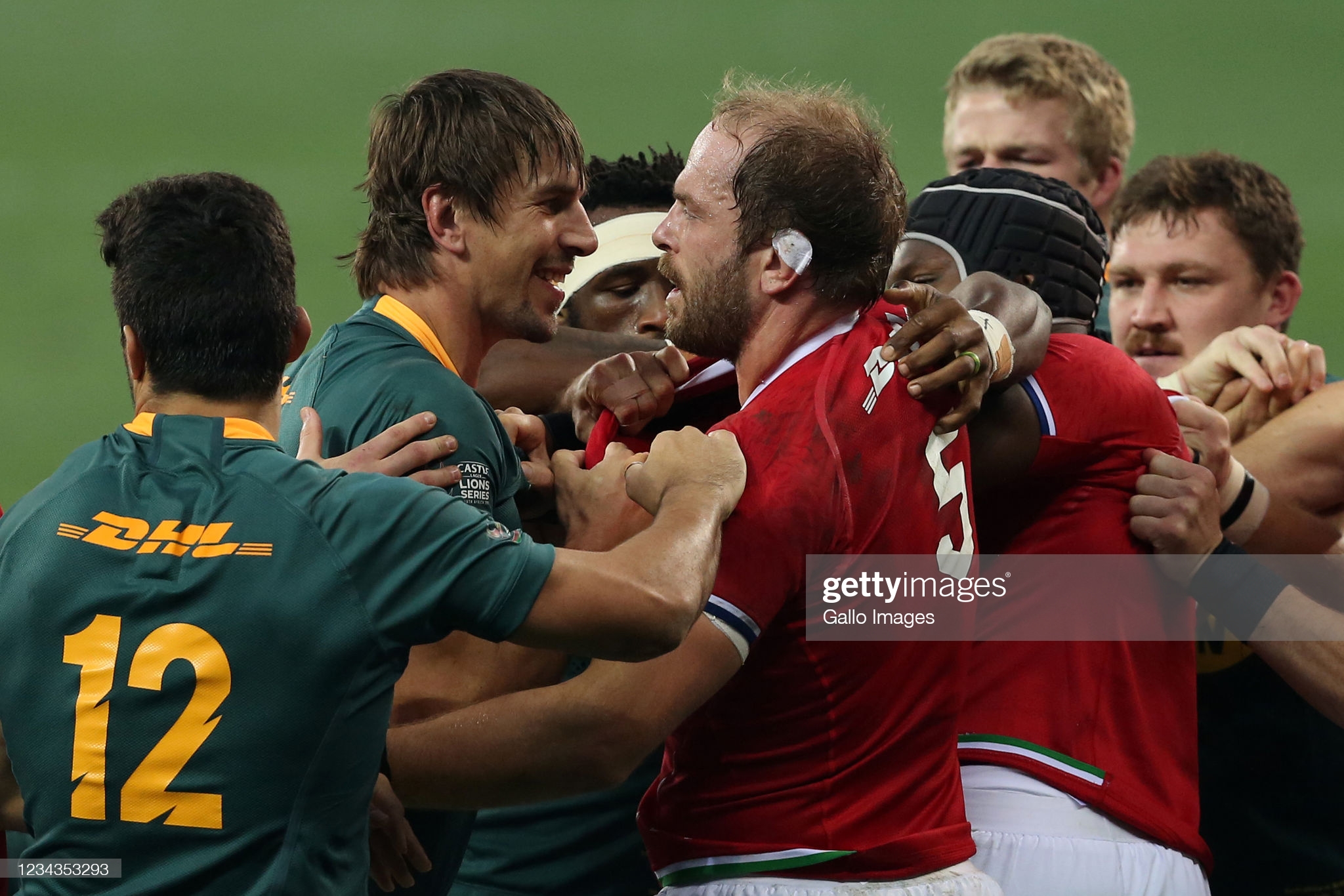 Incessant stoppages aided the world champions after their preparations were affected by an outbreak of coronavirus, while preventing the tourists from injecting any pace into a forgettable contest.

Lions captain Jones acknowledges the need to match the world champions’ formidable physicality but has warned it must not come at the expense of suffocating free-flowing rugby.

“They always happen but you don’t want to entertain them,” replied the Wales skipper when asked about handling flashpoints.

“There’s a case for not taking a step back but also an awareness in keeping the game flowing.

“You see finals, they can be attritional things but they can open up as well. I’d like to think we’re prepared for both.

“We were in it up until 60 minutes (last weekend) and then discipline probably cost us, so we want to have the ability to do both and be ready for both.

“We need to improve our set piece again, discipline obviously because the penalty count went against us, and try and maintain tempo in the game.

“If we can do that, we can stay away from anything that might slow us down.”

Lions coach Warren Gatland has already given his players strict instruction to avoid any niggle ahead of one of the biggest occasions of their careers.

Although South Africa’s fearsome reputation preceded them as they levelled proceedings at 1-1 thanks to a resounding 27-9 win, the Lions contributed fully to a catalogue of incidents that kept the officials busy.

While the Lions’ leadership has called for cool heads on match day, the intense nature of training sessions in the build up to Saturday’s eagerly-anticipated climax has remained unrelenting.

“We’ve had an edge in every week, I think it’s definitely here this week, since selection we’ve seen it and we’ve carried on in a similar vein throughout the week,” said 35-year-old Jones.

“So I can’t grubber through? Just big high ones? No passes either?” #LionsRugby pic.twitter.com/ex9Zm8MItj

“Our Tuesday session was tasty again, displayed the edge that we’ve seen on similar occasions previously and that’s the best sort of prep we can have for these games.”

The New Zealander  reacted by making six changes to his starting XV for the forthcoming winner-takes-all clash.

Wales hooker Owens will make a first Test start in a Lions jersey.

The incoming Scarlets front-rower insists belief remains high in the camp and feels a few “easy fixes” could be sufficient to secure a famous victory over the current world champions.

“You’d probably say the momentum is with South Africa with the way the last game went, but we can’t look back at what happened last week,” Owens said.

“The confidence is still there. We know and trust our processes and what we’re trying to achieve and we’re here for a huge third Test series decider.

“We’re in a really good place and we know the challenge that’s going to be coming from South Africa so it all bodes well for a great finale.

“We’ve got the blueprint for the win. We’ve just got to take confidence from what we’ve done well on tour.

Owens came off the bench for the second successive match last Saturday but was powerless to prevent the hosts turning a narrow half-time deficit into an emphatic win.

Dan Biggar and captain Alun Wyn Jones are also in the side with Adam Beard on the bench.

The Lions know they need to get the better of South Africa both physically and in the aerial battle if they are to come out on top and seal a series win.

Owens described that as a “massive challenge” ahead of one of the most significant games of his career.

“It’s my first start in a Test series for the Lions which I am hugely proud of,” said the 34-year-old, who was also part of Gatland’s Wales team narrowly beaten by South Africa in the semi-finals of the 2019 World Cup.

“It’s a third-Test decider against the world champions so it’s right up there as one of the biggest games, but definitely my biggest in a Lions shirt.

“We know exactly the challenge South Africa bring. They do pride themselves on it. They try to impose themselves physically.

“It is a massive challenge, but we knew that before coming down here. We took a bit of a hit with it last week and probably came second best.

“But I think we’ve been very physical on this tour ourselves so it’s going to be a phenomenal Test match.

“Warren has been pretty calm. He just knows how to get the best out of the players.

“He steps in and prompts boys when he needs to.

“He’s been at his best with that this week. That huge experience he’s got is right around the place at the moment.”