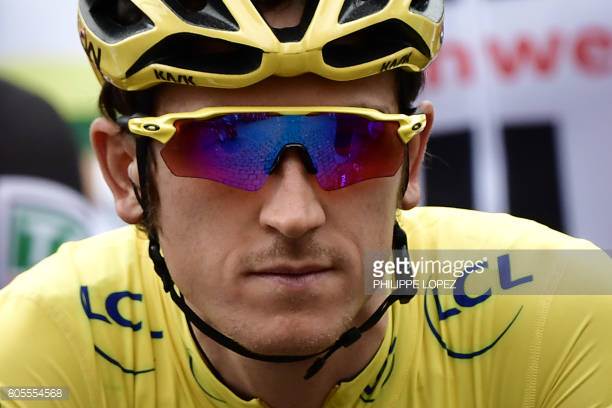 The Cardiff-born rider finished in the same time as the stage winner as Team Sky team-mate Chris Froome made a nightmare start.

Froome had to limit his losses after the unexpected crash with Sky’s other Welsh rider and road leader Luke Rowe dropping back to help pace him.

Thomas led the team home finishing in 14th spot along with the lead group in Fontenay-le-Comte behind winner Fernando Gaviria.

He said: “It wasn’t a super hard day and there was no real wind but then the last 20km was pretty bonkers.

“But you get used to it, that’s what the Tour is like. It’s always nice to get through unscathed and tick one off. 20 to go!”

Froome is Sky’s leader given his four Yellow Jersey triumphs but Thomas – who led the race last year after winning the opening stage – has protected status.

And should Froome suffer any more crashes or issues and lose further time to the main contenders, then Thomas could benefit.

But Froome is confident he can regain the lost time as he looks to win a fourth straight Grand Tour having been cleared over the salbutamol issue.

Froome said: “I saw a lot of crashes out there today. It’s just one of those things. We always knew the first few days were going to be tricky and going to be sketchy. It’s part of the game unfortunately.

“We were right at the front part of the peloton in the top third. There wasn’t too much more the guys could have done.

“It was getting quite chaotic with some of the sprinters there, but that’s bike racing. I’m just grateful I’m not injured in any way and there’s a lot of road to cover before Paris obviously.”

One thought on “Thomas Happy After Bonkers Stage As Froome Crashes”