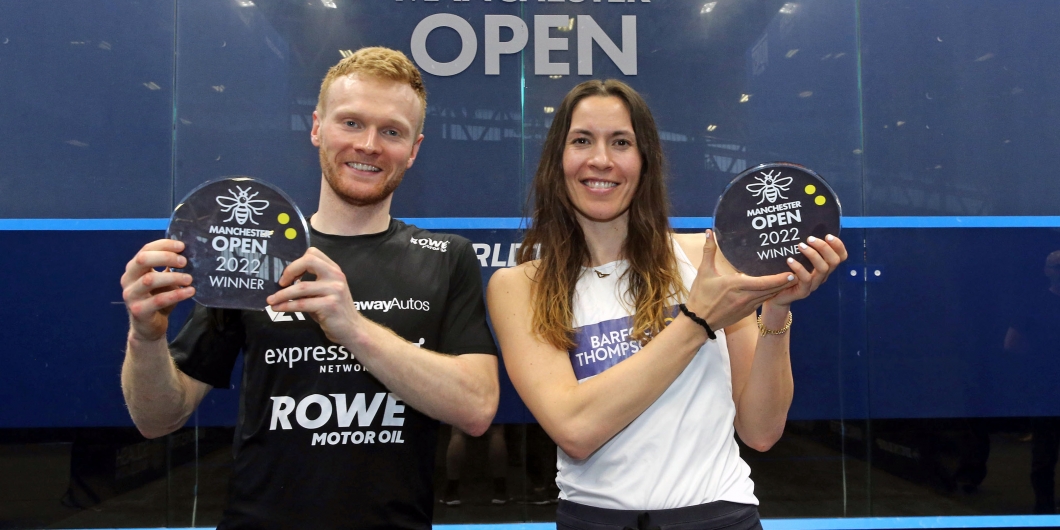 Joel Makin believes he has made another major breakthrough by beating world No.3 Mohamed ElShorbagy to claim the Manchester Open title.

It was a landmark win for the 27-year-old from Pembrokeshire who had lost 3-0 to ElShorbagy the last time they had met at the Squash On Fire Open.

“That was a massive push for me,” said Makin after overcoming the former world champion.

“I’ve been close to getting a win like this for a while. You feel like you’re putting in the work and you get close and then you lose.

“You put together matches but you don’t quite get it together all through the week. I’ve managed to get off 3-0 in earlier rounds here, which has been great for me and I was able to have a big push in the final then.

“I know what Mohamed has been doing to get back, he set six months aside to get back. I know he was hungry to get the win here today, he pushed hard and he was tactically difficult at the start of the match.

“A tense third game as well, it was tight but that’s what you want, to be able to compete like that. I enjoyed all of it and it’s great to be back here.

“We had the Manchester Open last year but we didn’t get to have a big crowd and this is what we want, people here enjoying the sport and tight, hard matches.

“The form coming into this tournament wasn’t where I wanted it to be, I just kept working hard and wait for a week to come together like it has done.”

ElShorbagy responded in the second game and started to pick off Makin’s drives, causing the Welshman to cover a lot of ground to retrieve the Egyptian’s attacks. The former world champion took the game 11-5 to equalise.

🎙️ “This is the biggest opportunity in his career…and he’s taken it!”@JoelMakin is the 2022 Manchester Open men’s champion 🏆#MCROpen pic.twitter.com/r3xbNFKhRp

Makin – nicknamed ‘The Golden Tiger’ – set himself up with five-game balls to take the lead.

ElShorbagy started to fight back, however, and impressively won the next five points to set up a tiebreak. Makin recovered and after squandering another game ball, took the game 13-11.

Makin continued to press on in the fourth game and his relentless energy and intensity was proving too much for the world No.3 to deal with.

The Welshman ran out to a 5-1 lead and showed no sign of slowing down. The world No.9 earned himself six championships balls at 10-4.

Makin only needed one attempt to secure his first title since winning the Arnold Homes Tring Open 2018 and his biggest title to date.

Dissapointed with the outcome last night at the Manchester Open losing in the semi finals but great to reach the latter stages of a tournament for the first time in a while!

Great to get better quality out this week and loving it again! Time to push on 💪🏻😁 #fistpumpsareback pic.twitter.com/bIoqlTEbQB

There was also a hugely impressive return to form from Wales’ leading female player, Tesni Evans, who reached the semi-final before losing to No.1 seed Sarah-Jane Perry.

Evans, the world No.14, showed the style that took her into the world’s top 10 in her quarter-final win over Georgina Kennedy and raced into a 2-0 lead against Perry.

But the world number six recovered to come from behind and beat Evans 3-2, before Perry herself lost the final against New Zealand’s Joelle King.