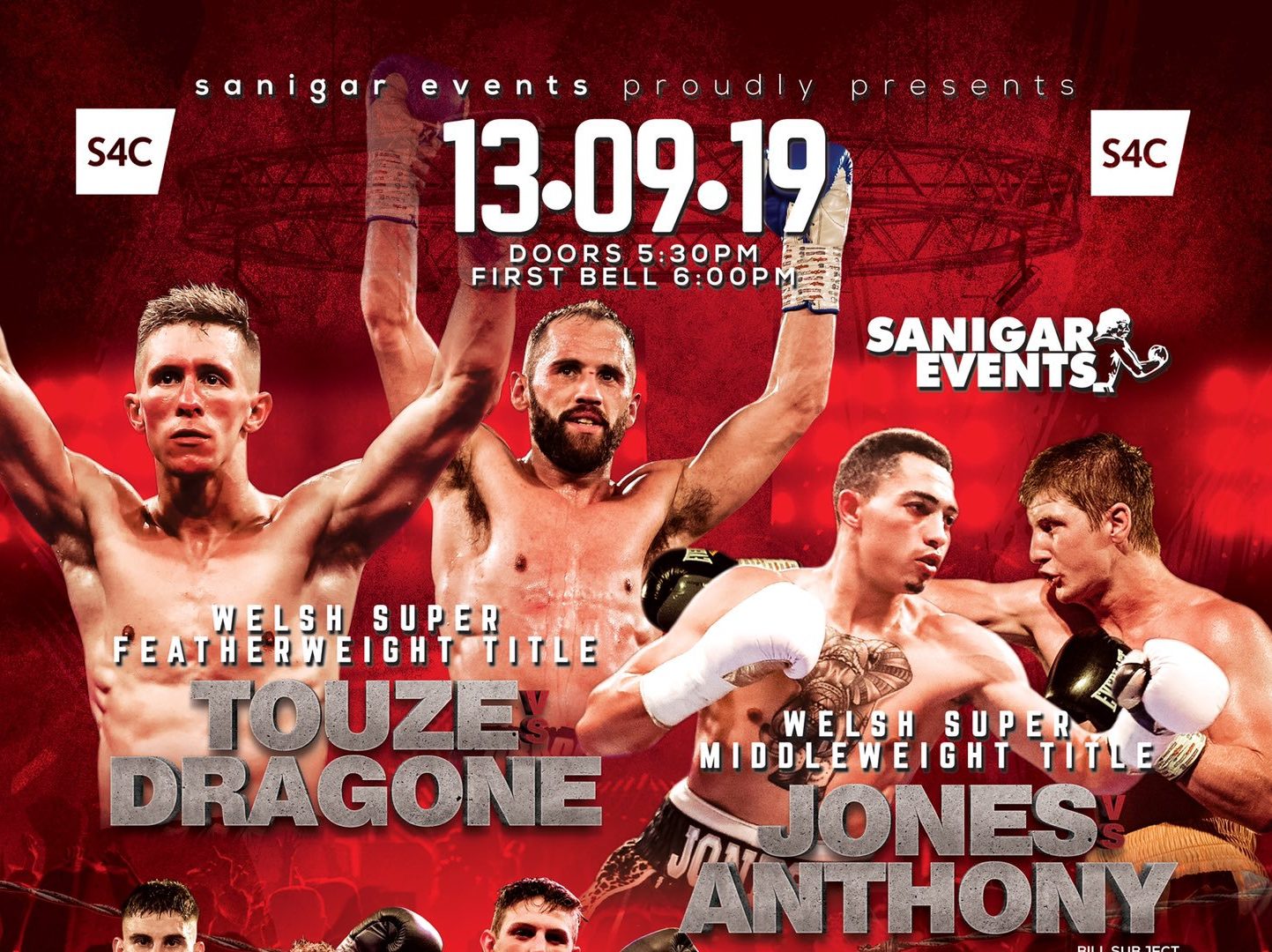 Boxer Kristian Touze has a reputation for donating to good causes, but insists there will be no charity shown to rival Angelo Dragone when the pair fight for the Welsh super-featherweight title.

Their eagerly awaited clash will top the bill at Swansea’s LC2 tonight (September 13) as part of a Welsh title double-header that features Morgan Jones taking on Jake Anthony for the vacant super-middleweight belt.

The bill, which also showcases some of the best emerging talent in Wales, will be shown live on S4C.

For Touze, it will be more than just a chance to take a Welsh title in a contest that pits Swansea against Carmarthen in a best of the west showdown. The 29-year-old former soldier will be following his established pattern of giving up to half his purse money to seriously ill children in the Swansea area.

“It’s something I’ve done after all my professional fights after being inspired by Manny Pacquiao and his donations of millions of pounds to people in the Philippines,” says Touze.

“I do it directly by meeting the family and donate straight to them. I’ve met the youngsters and that’s pretty inspiring. They are fighting a bigger fight than I’ll ever fight.

“Things like that mean more to me than keeping the money or going on a holiday. It gives me a bit of respect from the public and on social media. Money comes and goes, but those things last a lifetime.”

Win or lose, Touze will hand over the cash but he intends to stay unbeaten against a rival who could not provide more of an even match-up.

Both are the same age and both are unbeaten after turning professional fairly late on after amateur careers, although Touze just has the edge in experience as this will be his 11th professional fight.

Dragone – Carmarthen’s ‘Italian Stallion’ – will be making his sixth appearance as a professional and has five straight victories behind him, while Touze has had to share two draws.

Tensions ar rising as the fight gets closer!@dragone07 and @Toozey_2ZEE square up for the first time ahead of their Welsh title fight!

From this weigh in, I’m sure there will be fireworks! pic.twitter.com/Op4tt8XHkc

Both fighters know each other and although there’s a healthy respect, there’s also just enough needle that has piqued the interest of their respective fan bases, with hundreds from either camp heading for the venue.

Touze – an electrician by trade, but who has recently opened a beauty salon in the Fforestfach area of Swansea – adds: “It’s going to be electric with two local fighters. We know a lot of the same people as well and we’re both undefeated.

“He seems a nice enough lad and I give him respect. He called me out a few months ago, but that’s not really my style.

“I just fight whoever the manager arranges. It is what it is. I don’t under-estimate anyone, I always train hard for every fight and make sure I’m at the top of my game.”

But although their records may be similar, their styles are not – which should make for an intriguing contest.

Dragone – who normally has to get up at 3.00am to work on the family milk delivery round – insists he will be the one taking the fight forward with Touze in retreat.

The Carmarthen fighter says: “Kristian is a totally different style of fighter to me. I’m more of an aggressive, come-forward boxer whereas he’s more back foot.

“I like to come forward with controlled pressure. I’ve got a big engine and I break people down. It’ll be an interesting clash of styles and I’m looking forward to it.”

That cuts little ice with Touze, who says: “He likes to plod forward.

The Welsh Super Featherweight Title is on the line tomorrow night at @LCSwansea live on @S4C pic.twitter.com/fBvJ4lAWz6

“He’s got a good work-rate but although I’m more of a back-foot counter-puncher, I know I can mix it up if I need to. I’ve proven that before.”

Dragone last fought in June, when he beat Greek debutant Ilias Liokaftos on points, but it’s beating his much nearer rival he reckons will put him on the map.

“It’s the biggest fight of my life and I’ve been preparing for this as if it’s a world title. I really want to get my hands on that belt.

“It’s also a huge fight for west Wales – It’s Swansea v Caramarthen and everyone is talking about it. I can’t go down the road without someone mentioning it to me.

“I’ve got a huge crowd coming with me of around 200 to 250 people, so it’s fair to say people from Carmarthen and Llanelli have really got behind me. And for me, it’s a dream come true to fight on S4C for a Welsh title in front of those fans.”

In the other Welsh title clash, Jones will try to put back-to-back defeats that spoiled a previously unbeaten record behind him, when he takes on unbeaten 21-year-old Jake Anthony.

The undercard also features the professional debut of talented young Gilfach Goch middleweight Jordan Withers, who steps up after an international amateur career to take on Liam Griffiths from Sussex.