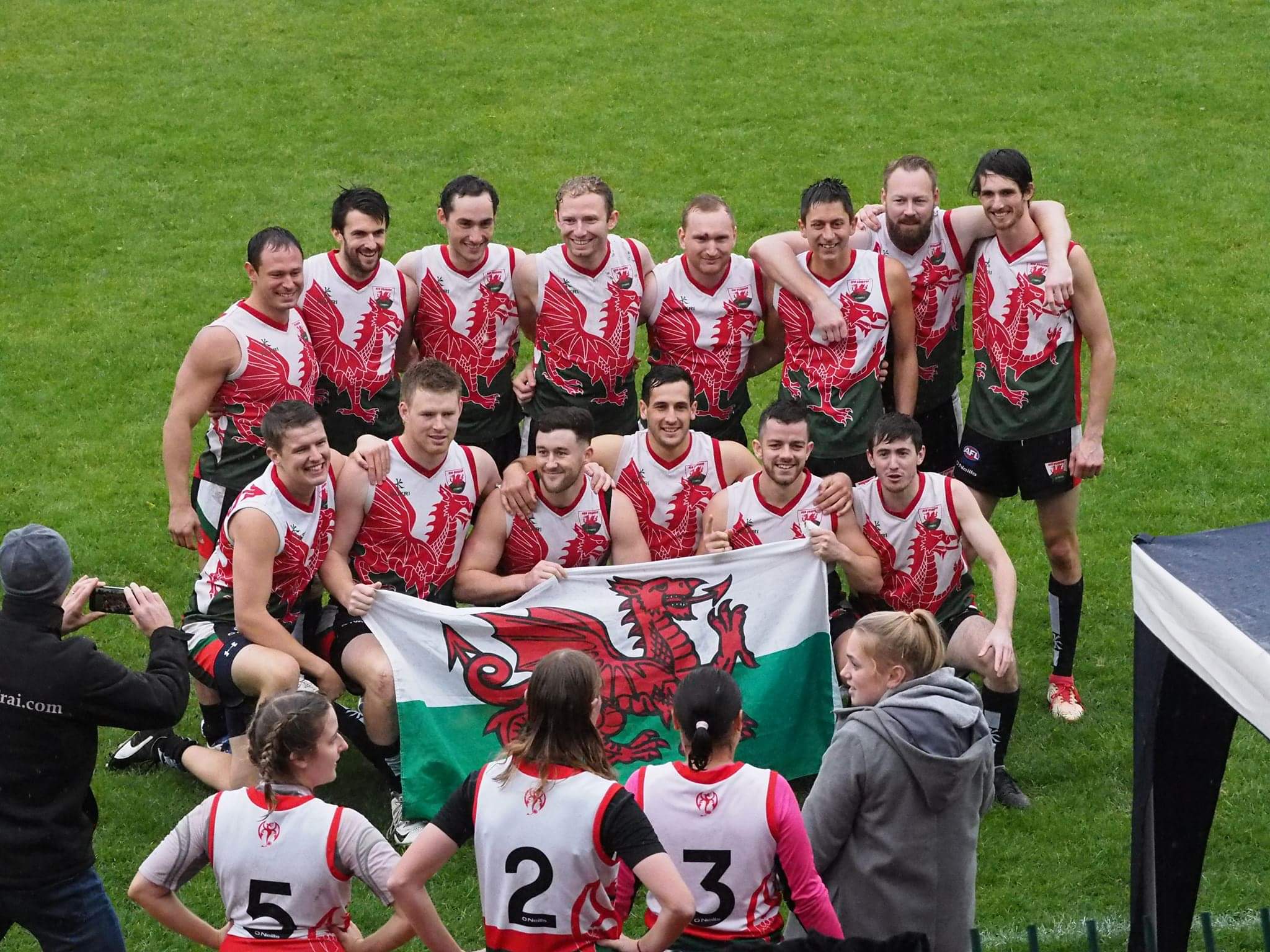 The Red Dragons on tour in Sweden sounds like a heavy metal gig, but it’s international sport and the Wales national Aussie Rules team who are there this weekend have big ambitions to make a noise. Graham Thomas spoke to veteran Euro Cup player Scott Jones.

Scott Jones is an international sportsman and even if over 99 per cent of the Welsh population has never heard of him, his best mate is proud of his buddy.

“I’ve a got a mate,” says Jones, a 33-year-old smart meter engineer from Cardiff. “He always tells people he’s got two friends who play for Wales – one in netball and one in Aussie Rules.”

Jones is married to Kyra Jones, the Celtic Dragons netballer, an Aussie who moved to Wales a decade ago and became eligible to play – with distinction – for her adopted country.

Scott showed young Kyra around Wales and in return she took him to Perth and, like a true romantic Aussie girl, showed him Aussie Rules football – a sport he found perplexing, brutal and utterly fascinating to the extent that when he came home he immediately looked around for a club to join.

That was in 2011. On Saturday, the Cardiff Panthers player will be in Sweden, pulling on a Welsh shirt and representing his country at the highest level possible – the Euro Cup.

It’s a far cry from the Euros that the Wales football team reached the semi-finals of three summers ago in France, or the World Cup the Wales rugby team will contest in Japan this summer.

But try telling the 16 Welsh players who are spending upwards of £500 each on getting to the town of Norrtalje that their commitment to the cause, their pride in the shirt, just doesn’t match up.

“The bank balance takes a bit of a knock,” says Jones. “Even though we’re staying in hostels, it’s not cheap. But, hey  . . . we’re playing for Wales.”

The Wales squad consists mainly of Welsh-based players, with a couple of others who play the sport in London.

The majority are club rugby players and footballers, plus a couple of hockey players, who use Aussie Rules to top up their fitness – and their competitive juices – in the summer months by playing and training in Cardiff’s Pontcanna Fields.

Unlike the Wales rugby team, who have borrowed regularly from Down Under over the years, there are no Aussie accents in the Wales Aussie Rules squad. In fact, keeping Aussies out of the sport is of primary importance to the organisers of the Euro Cup, AFL Europe.

In the early years, back-packing Aussies – who grew up in cities like Melbourne, where Aussie Rules is only slightly less popular than breathing – would dominate national teams.

All they needed was some sort of residency qualification and they would elbow aside local enthusiasts quicker than an Essendon Bomber forward rising skyward to take a “speccie”.

Jones recalls: “For the first few years, a load of Aussies with British passports turned up and qualified to play for England and were able to play. None of the English guys had a look in.

“AFL Europe had to come up with a plan to restrict the number of Aussies. So, they introduced a rule that said you had to have learned the game outside of Australia.

“How they check, I don’t know. But it seems to have stopped all the Aussies from playing. Now, they come along to just watch and have a lash up on the beer.”

This will be Jones’ – a former rugby player – seventh appearance at the annual Euro Cup and he is desperate for Wales to improve, or at least match, their best-placed placing of fifth.

That’s Wales, by the way, a country of three million people – and not exactly awash in every corner with the influence of migrating Australians – finishing fifth in the whole of Europe at Aussie Rules.

“If we could come fifth again that would be great. We’ve done that twice before – most recently in 2017 and also in 2013 – but we’ve never made the top four. I’d love to do that this time.

“In 2013 in London, we met England in our pool. We then played them later on again in the tournament and we beat them. That’s my best moment in the sport.”

Spoken like a true Welsh international sportsman, which, of course, he is – except for the fact that the sport’s credentials in Wales are not recognised, so they are not eligible for any public funding.

“Nobody really knows about what we do. I went to Sport Wales and asked how we could get AFL Wales to become an accredited AFL body, but it all became a bit of a runaround and fizzled out.

“It’s popular There are always newbies turning up and some who drift away. So, the numbers are pretty steady. We always get a lot of uni students turn up at the start of their year, too.”

The Panthers play in the Welsh Australian Rules Football League (WARFL) – something of a misnomer at present as they are the only Welsh team in it.

The Bristol Dockers and the Chippenham Redbacks are there, but teams from Swansea and Cwmbran have proved less resilient and faded away.

It means Wales also have to draw from other leagues, including the strongest ones in London, for their contingent of Welsh-qualified players to represent the country.

The WARFL is a shortened nine-a-side version of the sport, as is the Euro Cup, as there are too few grounds that can provide the full giant-sized oval playing surface for the proper 18-a-side version.

And in keeping with the sport’s love of exotic names, Wales are known officially as the Welsh Red Dragons. At the Euro Cup, they have been drawn in the same pool as Ireland (Irish Warriors), the Czech Republic (confusingly, also the Dragons), and Switzerland (Swiss Wolves).

It could have been worse. At least they avoided the French Coqs, the Russian Bears, and the Israeli Beasts.

There’s also a women’s tournament taking place, featuring the Welsh Wyverns. Rather than a mention in passing, they deserve their own feature, which they’ll get.

Only nine players are allowed on the field at any one time, but seven substitutes can be used on and off at any stage.

Like a Sevens rugby tournament, the matches come thick and fast, and the whole Euro Cup – group stages, knockout, bowl competition plate and after-party – will be completed in one sweaty day’s work on Saturday.

“The games go on through the whole day, so it can be tough on the legs,” says Jones.  “The matches are only short – 12-minute halves – so it’s intense. But you end up playing at least five games in the day, so you need to be pretty fit to cope.”

Fit and durable, too. Injuries are common and downplayed with a matter-of-fact, casual air that might shame even some of the toughest rugby players.

“I’ve had no real major injuries,” says Jones. – “Just a few broken or dislocated fingers and I’ve injured my knee quite badly once or twice.

“Oh, and my forehead. One of the boys put a shepherd in (a blocking move) on the opposition. His knee hit my head and split it open. That was a pretty massive gash.

Rugby might seem a natural breeding ground for Aussie Rules players, but it’s not always that straightforward.

Less than three weeks until the 2019 Euro Cup, it’s time to look at who’ll be competing in our Team Previews. In Part One, the Austrian Avalanche, Croatian Knights & England Vixens tells us about their preparation for Europe’s premier 9-a-side tournament.https://t.co/xDn88ID1gU

“People do find it confusing. And a lot of rugby players sometimes don’t like it because it’s 360 degrees and so the contact can sometimes come from behind.

“That’s a bit unsettling for them. They don’t like the fact people can smash you from behind. But I love the contact. It’s why I play.”

Broken bones and busted heads aside, Wales – coached by former international Tom Case – fancy their chances and would love nothing more than a meeting with the dubiously self-titled “England Dragonslayers”.

Whatever happens – and whoever gets slain – Wales are unlikely to bow out quietly.

Case says: “After being seeded in the second tier spot we are looking to get through to the quarter-finals and then plan from there.

“Some big early displays will set the tone for us before facing the Irish in our last group game. We are expecting big things from this select group of Red Dragons.

“Last year, Aaron Gale split his head open on the main pitch within minutes, then stayed out until 4am for the after party. He was the main hero from last year’s tourney.”