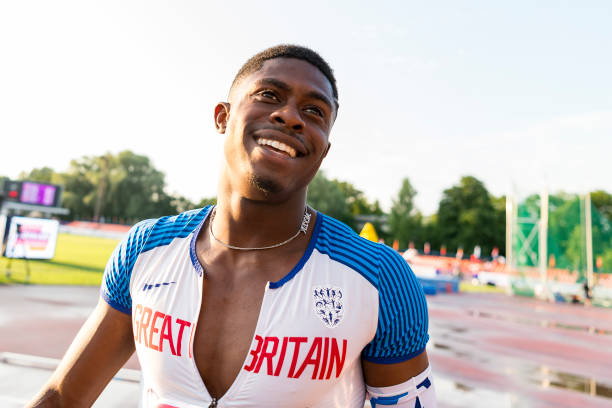 Wales’ 4x100m men’s relay team ran the fastest time by a Welsh quartet outside of a Commonwealth Games at the Wanda Diamond League meeting in Gateshead on Tuesday night.

Meanwhile the Welsh women’s team clocked one of their fastest 4x100m times ever at the same event.

The men’s time, recorded by Jeremiah Azu, Josh Brown, Dan Beadsley and Sam Gordon is second only to the performances by the Welsh quartet at the 1998 Commonwealth Games in Kuala Lumpur.

On that occasion Kevin Williams, Doug Turner, Christian Malcolm and James Henthorn registered a time of 39.09 in the heats and then 38.73 in the final, which still stands as the Welsh record, as they finished just outside the medals in fourth place.

Strong performance for @WelshAthletics women’s 4x100m 45.25 is on par with what they ran pre 2014 CWG & then set a Welsh Record at the game! Thanks to coach @Lawrencemoore66 for the support with this group of ladies 🙌🏼 pic.twitter.com/q6KM80fpLz

The current crop of Welsh speed merchants stopped the clock at 39.36 as they finished sixth in a high quality field in the north east of England.

Cardiff’s Azu, fresh from winning 100m gold at the European Under-23 Championships in Estonia last Friday, set the Welsh team on their way before handing over to Cardiff team-mate Brown.

Swansea Harrier Beadsley ran the third leg before passing on the baton to another Cardiff athlete Gordon who brought the Welsh team home behind a Great Britain A four which won the race in a world lead time of 38.27. Canada were second followed by the Netherlands, Brazil and an All Stars team.

The Welsh time was narrowly outside the 39.00 standard for next year’s Commonwealth Games in Birmingham.

Brier and Moore were also involved in setting the current Welsh record of 44.51 as part of the 2014 Glasgow Commonwealth Games quartet, completed by Hannah Thomas and Rachel Johncock, which finished seventh in the final.

On Tuesday night, Swansea Harrier Brier led the Welsh team out, handing over to Wrexham’s Odunaiya, before Birchfield Harriers Moore and Roberts brought the Welsh team home in fifth place behind the Netherlands, Great Britain, All Stars and Switzerland.
The women’s time was also outside the Commonwealth Games standard of 44.00, but both teams should be encouraged by their performances.

Earlier in the evening, Joe Brier – younger brother of Hannah – finished second in his final race before heading off to Tokyo with the Great Britain Olympic team on Thursday.

The Swansea Harrier, who missed out on a place in the 4×400 relay squad after a disappointing performance at the British Championships and Olympic trials, was subsequently called up as a travelling reserve for the team last week.

On Tuesday night Brier finished second to fellow British athlete Nicklas Baker in a time of 46.34.

The 22-year-old from Neath crossed the line ahead of a number of his Great Britain team-mates including Michael Ohioze and Lee Thompson.

Brier said afterwards: “The race felt really good today. I got out pretty well, set up on the back straight and then finished strong how I wanted to.

“I’m feeling good and it was a great race out there today in the sunshine. I put it all out there on the track.”

Tokyo Paralympics hopeful Olivia Breen is in confident mood ahead of the games after finishing second to Sophie Hahn in a combined women’s T35/38/44/64 100m.