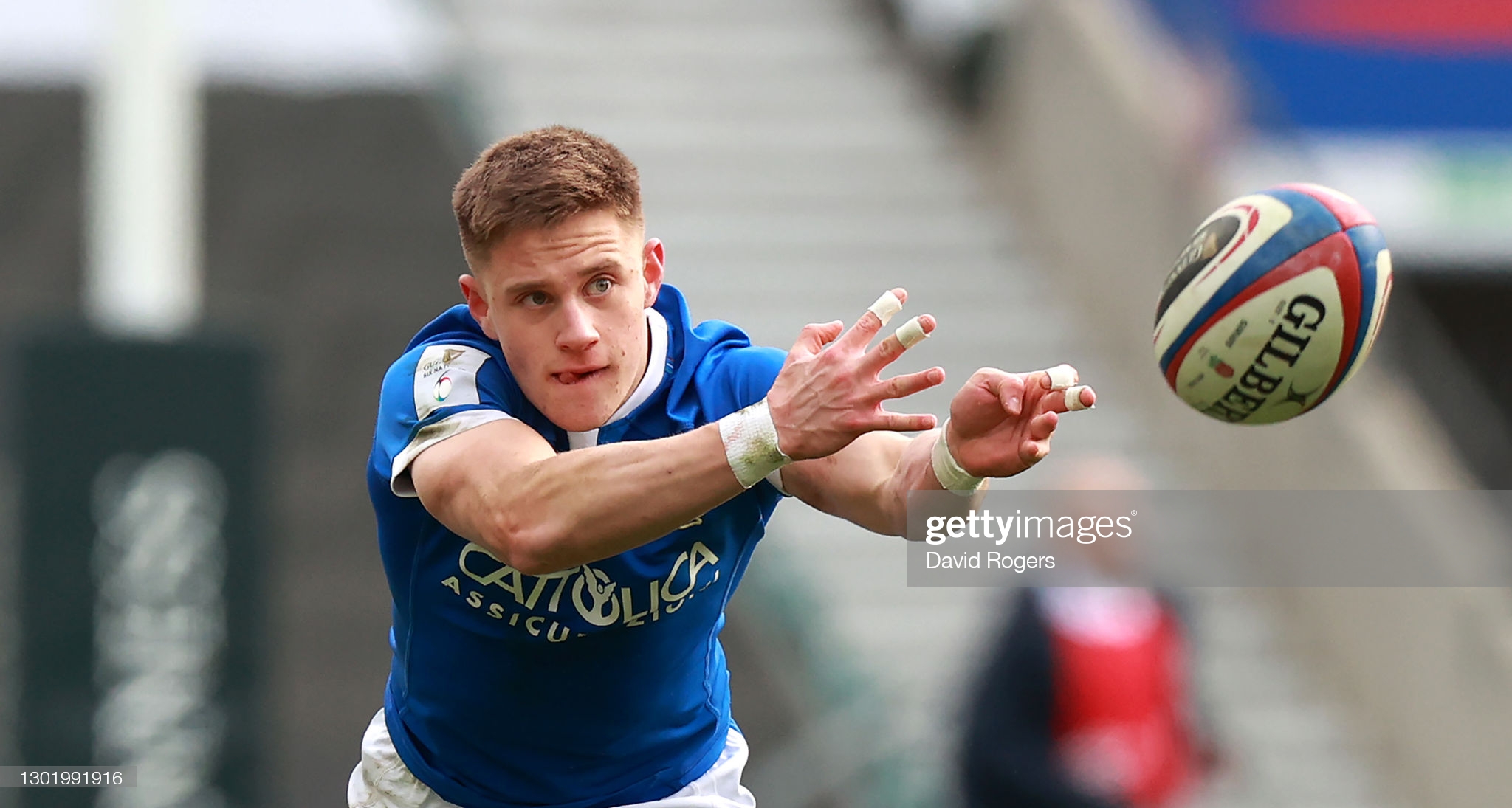 Stephen Varney will be the Welshman aiming to run Wayne Pivac’s Grand Slam bandwagon off the road in Rome next week.

Varney has already beaten Wales at U18 and Under 20 level and now the Welsh-speaking teenager is hoping to make it a hat-trick by helping Italy halt the Welsh march to a potential 13th Grand Slam.

The Carmarthen-born scrum half – who learned his rugby at Crymych RFC – has already won five senior caps for the Azzurri and made his first start for the senior Italian side against Wales at Parc Y Scarlets in the Autumn Nations Cup.

He started against both France and England in the Guinness Six Nations tournament this year, but was ruled out of the round three clash with Ireland when he dislocated a finger in the warm-up.

Now he is fit to resume next week when Wales head to Rome seeking to maintain their unbeaten run.

Varney is joined by Marcello Violi who has impressed since his return to action with Zebre, while Daniele Rimpelli is recalled with Cherif Traorè ruled out through injury.

Head coach Franco Smith is hoping his side can find a way to not only halt Wales, but also end a run of 30 successive defeats in the tournament.

Italy squad to prepare for their home game against Wales a week on Saturday #itavwal #GuinnessSixNations pic.twitter.com/sgeWjZJ2PT

Their last victory came on 28 February, 2015, at Murrayfield when they beat Scotland 22-19. Varney, who qualifies to play for Italy via his Italian mother, Valeria, was only 14 at the time.

“We start again focusing on ourselves. These defeats, which do not reflect the quantity and quality of work put in during training, must serve as motivation for us to learn from our errors and spur us to react,” said Smith.

“We continue on our journey to becoming more competitive. We have before us two important matches, two opportunities to show our true value and finishing off the Championship in the best possible way.”

As well as Violi, Marco Zanon is also back in the squad, having started the opening game against France before missing the games with England and Ireland. Edoardo Padovani is also recalled to provide some experience in a young group of outside backs.

On the back of their Triple Crown success last weekend, Wales have climbed to fifth position in the World Rugby Rankings following their 40-24 win over England.

Pivac’s men are riding high after tries from Josh Adams, Liam Williams, Kieran Hardy and Cory Hill meant they went on to register their third consecutive win in the tournament to consolidate the top position in the Six Nations table.

📈 After the weekend’s Six Nations action, here’s how the World Rugby rankings are looking…

🏴󠁧󠁢󠁷󠁬󠁳󠁿 Wales have jumped up to 5th after their win over England, who have dropped below France down to 4th. pic.twitter.com/VGaXAg8epd

Italy, who suffered yet another Six Nations defeat – against Ireland – have 70.65 rating points and have now moved down to 15th place.

England, who suffered their second defeat of the competition, have slipped from third place to fourth with rating points of 85.63.

Despite Ireland recording their first win of the competition with a 48-10 victory over Italy, they have lost one place and are now at seventh with 82.55 rating points.