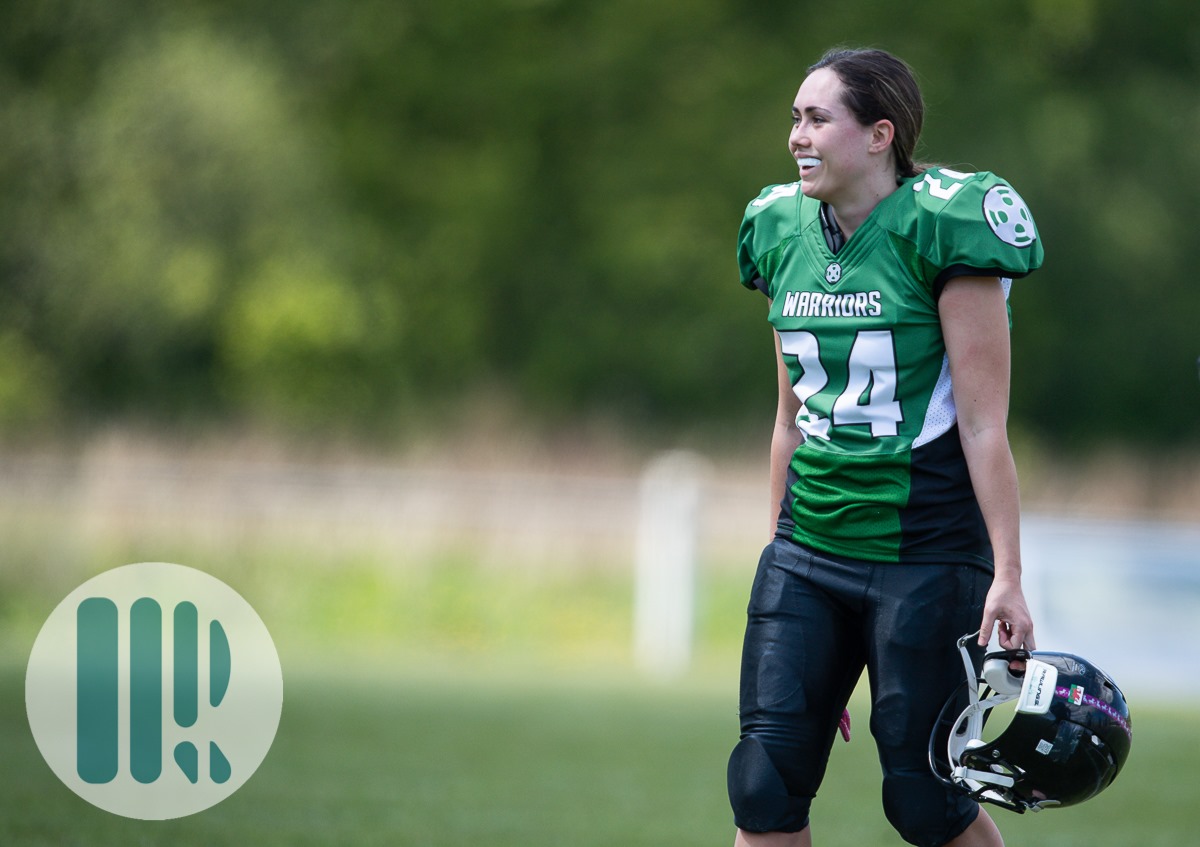 Elleanor O’Connell needed a new sport after suffering a serious rugby injury – but rather than avoid contact sport she took up American Football and is now the only woman on a men’s team.

The 23-year-old first turned to the “stupid sport” due to the possibility that further aggravating the trauma injury she sustained to her throat in a rugby sevens tournament could kill her.

But she says she is confident the heavy padding that gridiron football is famous for offers sufficient protection to her throat and is now playing on the defence for the South Wales Warriors who compete in Division Two of the British American Football Association National League.

“I had a neck injury in rugby that prevented me playing contact sport, if I get hit in my neck it would kill me. I was in hospital for a week and I can’t get an impact to my throat,” says Elleanor who suffered the injury, aged 18, in a tournament in her native Australia in 2013.

Despite the risk of injury Elleanor, whose father Glyn is from Newport, took up rugby again after travelling and settling in Cardiff in November 2016.

A teammate at Llandaff North Rugby Club was already playing for the Cardiff Valkyries, the only women’s American Football team in Wales, and Elleanor, who first played rugby at 16, switched sports.

“I thought American Football was a stupid sport and a soft version of rugby but every time I was tackled in rugby it made me nervous because of the injury. Beth Kenure, who was a teammate at Llandaff North, was playing for the Valkyries and suggested I try it.

“After the injury I was originally told not to play contact sports. American Football isn’t recommended but it is much safer (for me) than rugby because of where my shoulder pads sit.”

Having first taken up the sport with the Valkyries, who play a shortened version with just seven players a side, Elleanor progressed to the Great Britain national squad which competes in the full 11-a-side game.

To prepare for playing with Great Britain Elleanor began training with the Llanharan-based Warriors last year but this season has taken her involvement a stage further by joining the team.

Elleanor, who works in social media marketing, has since had to put her international ambitions on hold as she will move back to Australia in September to study criminal psychology at university so has relinquished her place in the GB squad.

Her return to Australia will also allow Elleanor to play women’s 11-a-side American Football but she is taking advantage of the opportunity to compete with men this summer playing for the Warriors who are undefeated in three league games.

“I think I love the sport too much,” says Elleanor of any thought she has given to the risk of injury from pitting herself against male players.

She saw her first action, alongside and against men, this pre-season and has already featured in two competitive league games in recent weeks. Her favoured position is on the defence, as a cornerback, and she is also on the Warriors kick-off team which has ensured plenty of action for the high-scoring side as a “gunner” or outside tackler.

Though the gender gap is rarely breached in sport there are a number of teams in British American Football that feature female players and neither is it unheard of for women to play alongside men in America.

A handful of women have played as place kickers, who normally do not make contact with opposition players, in America’s college football while Toni Harris this year became the first woman to be offered a full scholarship to attend university as a football player at the lower grade NAIA level with Central Methodist University in Missouri.

Harris, who featured in a TV commercial for Toyota that aired in America’s most lucrative advertising spot during February’s Super Bowl, like Elleanor plays as a defensive back against male opponents.

Though American Football is often described as a game for all shapes and sizes it is dominated by large, strong and athletic bodies. Elleanor, who is only 5’4 and weighs just nine stone, says playing cornerback, with responsibility for covering speedy receivers and the edge of the field, is well suited to someone of her stature.

“I think the position I play means I can read the game a bit more so I can be where I need to be and not have to take the big hits and I feel confident in my abilities.”

Male players also concede a size advantage to their opponents points out Elleanor: “Our safety Daniel Dacey is one of the smallest players but he hits the hardest.”

And Elleanor, who clearly enjoys the physical confrontation of contact sports having moved from scrum half to wing in her rugby days as she was too “chopsy”, says she hasn’t been daunted by the men she has encountered in American Football.

“The women I played rugby against back in Australia are about the same size as the guys I play American Football against here.”

Neither has she received any negative reactions to playing with and against men. Elleanor, who thinks opposing teams normally realise there is a woman in the Warriors squad when players warm up, usually without their helmets, before games, says: “I don’t think I’ve had anyone say anything negative. Usually they are like ‘it’s really awesome to see a girl play’. It’s been 100% positive and I’ve had a fantastic experience and the Warriors have been incredibly supportive.”