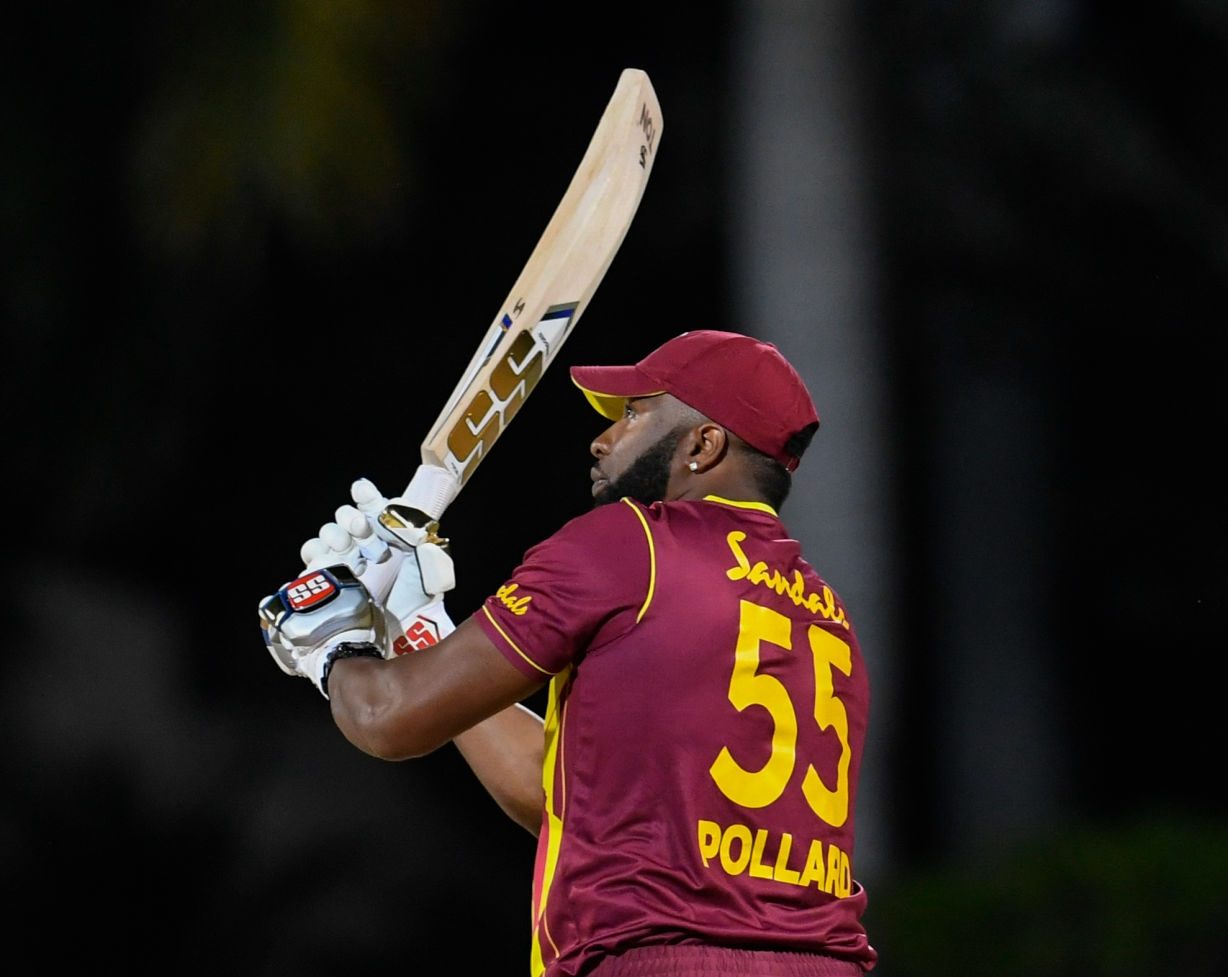 Kieron Pollard of West Indies hits out on his way to six sixes. Pic: Getty Images.

West Indies captain Kieron Pollard has given Welsh cricket fans a glimpse of the excitement and awesome power he could bring to Welsh Fire next season.

Pollard – who has signed to play for the franchise in the new format competition, The Hundred – smashed six sixes in an over to guide his country to a comprehensive four-wicket win against Sri Lanka in the opener of their three-match T20 series.

He became only the third player to strike six maximums in a single over in international cricket.

Sent in to bat at the Coolidge Cricket Ground in Osbourn, Antigua, Sri Lanka scored 131 for nine, with debutant Pathum Nissanka top-scoring with 39 from 34 balls.

As the home side began their chase, leg-spinner Akila Dananjaya claimed a hat-trick in the fourth over in dismissing Evin Lewis for 28 and then Chris Gayle and Nicholas Pooran.

But in the sixth over the spinner was pummelled in all directions by Pollard, whose innings set up a four-wicket victory.

Kieron Pollard, are you for real?! 💥🚀

Pollard was trapped leg-before-wicket to Hasaranga de Silva in the following over to finish with 38 from just 11 deliveries.

De Silva dismissed Fabian Allen with the next ball before a block from Dwayne Bravo denied the Sri Lankan the second hat-trick of the innings.

Bravo and Jason Holder, who scored 29 not out, rallied to see the hosts home at 134 for six in just 13.1 overs, with Holder securing the win with the 15th six of his side’s innings.

“I felt I could hit six sixes after the third one,’ said Pollard who will star for Welsh Fire this summer in Cardiff alongside England’s Jonny Bairstow.

“I felt after hitting a couple of sixes, I understood how the pitch plays. It was important to be positive and play your shots -back yourself to clear the boundary.

Kieron Pollard becomes the third player to hit six sixes in an over in an international match.

Pending rules on spectators, his presence should put a few more on the gate for the @WelshFire_100 this summer.

“A couple of things went through my mind before the sixth ball. I thought, ‘should I go for the six or take the 30 runs in the over?’ He went around the wicket and bowled it onto my pads, so I told myself,  ‘Wait. Polly. Take a chance.’

“That’s how I have played my cricket all along, especially against the spinners.”

The 33-year-old joins former India batsman Yuvraj Singh as the only other player to hit six sixes in a T20 international over.

Herschelle Gibbs was the first player to ever hit six sixes in an international over though when the former South Africa batsman tore Holland apart at the 2007 World Cup in the West Indies. Gibbs remains the only player to do so in the 50-over format when he bludgeoned Daan van Bunge in St Kitts and Nevis.