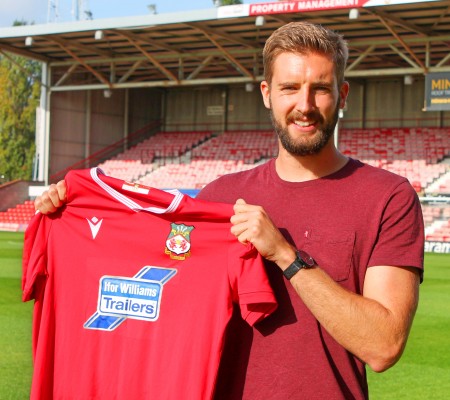 Life will be far from quiet on the pitch when central defender Fiacre Kelleher makes his debut for Wrexham, probably against Telford United away on Tuesday.

Irishman Kelleher loves to make himself heard during matches and says: “I don’t shut up, always talking on the pitch.

“I am decent at organising and the vocal side of things, along with being good in the air.

“I have good presence and size and I’m quite quick in a straight line.”

Cork-born Kelleher – who first name is pronounced ‘fee-ah-ker’ – is one of four brothers and his younger sibling, Caoimhin, is a 21-year-old goalkeeper who plays at Liverpool.

Kelleher has committed to Wrexham on a one-year deal after he left Macclesfield Town. The 24-year-old is a product of the Celtic academy, where he spent four years, and moved to England in 2017 to sign for Oxford United.

“I spoke to the manager and I had a really good chat. I know a lot of the lads here already, having played with a lot of them so I know the calibre of the squad.

“I’m finally getting back to playing football now. I will get my head down and get back to what I enjoy doing.”

Kelleher, who hails from Blackrock in Cork, played for Celtic youth when they won the Scottish Youth Cup by defeating Rangers 5-2 in the final at Hampden Park.

Kelleher made 88 appearances for Macclesfield after joining them from Oxford United during the summer of 2018.

Kelleher watched from the stands as Wrexham beat Salford City XI 2-1 at The Racecourse in a pre-season friendly.

Welsh teenager Jake Bickerstaff scored one goal and created the other for Wrexham.