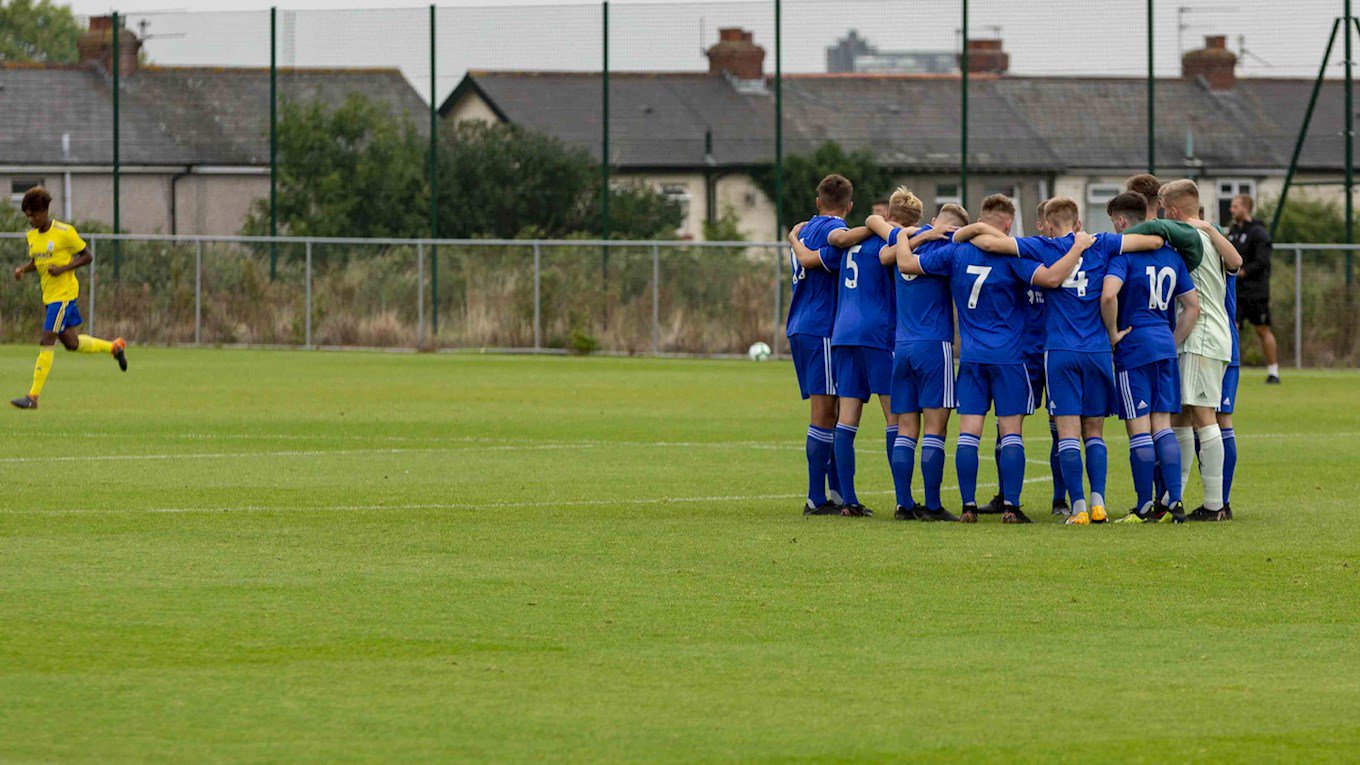 Bluebirds' under-18 team in a huddle. Pic: Cardiff City.

Mayembe, a 16-year-old attacking midfield player whose family are from Zambia, fired City in front after five minutes and then equalised on 48 minutes after Alfie Devine (24 mins) and MacKenzie O’Neill (25) had scored twice in 60 seconds for the Latics.

There are two players of Zambian descent in Cardiff’s under-18 team. Mayembe plays alongside British-born midfield player Tom Chiabi, a former AFC Wimbledon youth player whose brother Troy is still with the ‘Dons.

Wigan had Harry Jolley was sent off after 73 minutes, but City were unable to force a winner.

The young Bluebirds, coached by Matthew Bloxham, are at home again in their next under-18 fixture with Leeds United visiting Cardiff International Sports Stadium on Saturday, September 14 (10.30am).

Hosts Cardiff made a rapid start when Mayembe shocked the Latics with a stunning drive into the top left corner from inside the area, but Wigan hit back midway through the first half.

Jensen Weir was at the forefront of Latics’ positive forward play, while Devine equalised.

Cardiff had hardly restarted the game when Wigan took the lead with Northern Ireland youth international O’Neill curling a beauty into the bottom right corner for 2-1.

Cardiff’s Australian goalkeeper Cogman pulled off an excellent save to keep the score at 2-1 and denied Tom Costello with another big stop.

Siyabonga Ligendza and Mayembe both had shots saved by Wigan goalkeeper before half-time.

Cardiff were quick out of the traps again in the second half with Mayembe netting his second of the game to equalise for 2-2 after he latched onto a loose ball.

Both sides had chances throughout the second half, with Costello coming close once more before Tickle pulled off an outstanding save to deny Cardiff’s Sam Parsons.

O’Neill almost scored his second goal with 20 minutes left when he ran clear and faced Cogman one-on-one. The Aussie stopper was again equal to the challenge and saved.

Three minutes later Latics were reduced to 10 men when Jolley brought down Mayembe as burst through on goal and looked set to complete his hat-trick.