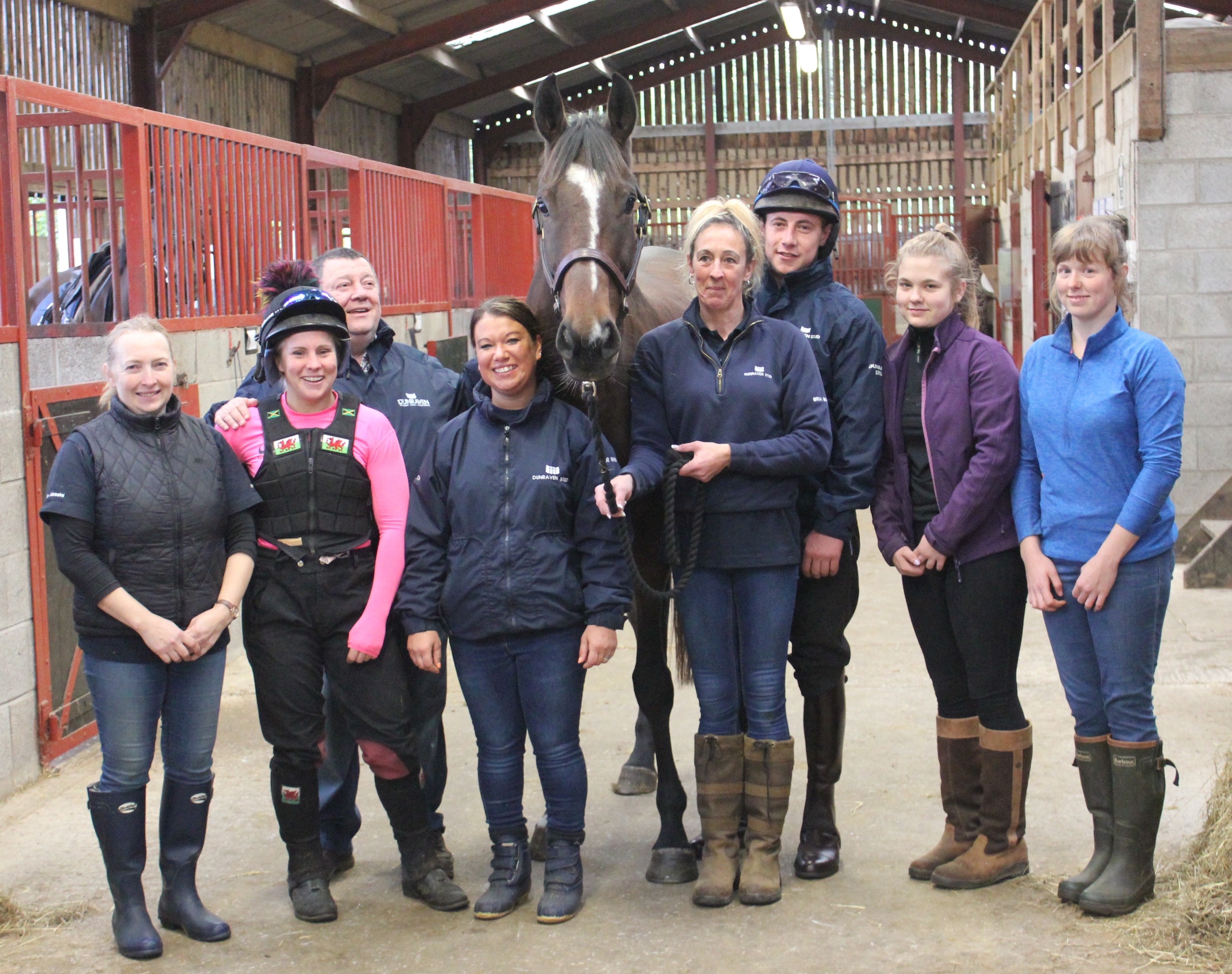 Welshman David Brace is a man who moved from coal face to horse race.

The former miner turned businessman, philanthropist, stud owner, racehorse trainer seems to have been successful at everything he’s tried.

As one knowledgeable source told me of David, a winner of the Jim Mahon Award for contribution to the sport: ‘He’s done more for Welsh point-to-pointing than anybody.’

His support includes sponsorship and the course at Pyle, he stands leading National Hunt stallions Mountain High and new recruit from Coolmore, Ask, at his Dunraven Stud.

David, awarded the OBE in 2013, enjoyed his most successful season as an owner-trainer last year.

He was leading owner between the flags with 23 winners, had the leading horse in William Money, the top young horse in Pink Eyed Pedro and – most gratifyingly of all – grandson, Connor, was champion novice rider.

On arrival at Llanmihangel Farm, the site of David’s highly successful training establishment, I’m greeted with a smile by Jess Fortt, an integral part of the operation since 1999.

Other key members of the team we meet as we look round the yard, which David built himself from scratch, are long-term employees Louise and Penny, complemented by Georgia and Sara, as well as grandson Max (Connor’s rugby-mad younger brother) and, of course, stable jockey Bradley Gibbs.

Jake’s first question for David is how he graduated from collier to where he is now?

He worked down the pit at St John’s Colliery, Maesteg alongside his father, Evan.

“My father and grandfather worked down the mine and when I left school at 15, that was my only plan. I loved every minute working in the pit,” he admits.

“But there came a time when I thought I’d try something else and joined a sales outfit specialising in windows, ending up running it and decided to go on my own when I was 29. That was nearly 40 years ago.”

Dunraven Windows is now one of the largest companies in its field, employing around 500 people.

“I’ve ridden since I was a child and rode in one point-to-point,” said David.

“It was on a horse called Warren Mill in 1971 at Llanybri. I was working down the mine at the time.”

Why, though, only one ride?

“I broke my collarbone and the horse went wrong later that year,” says David, affectionately known as ‘Bracey’. “The guy I knew who owned him only had one horse.”

After his abortive attempt to be a jockey, David didn’t get involved in pointing again until the mid-1980s.

His first winner was Atlanta Lady, who he owned in partnership, while the first horses to run in the now famous black and red colours included Lucky Ole Son, Irish recruit Goolds Gold and the ill-fated African Bride

“We lost her to an accident at home, said David of African Bride, whose half-sister, prolific winner Coolvawn Lady, David later acquired as a broodmare.

The stud side of the farm started almost by accident and David tells me. “I bought a mare or two, then was offered Dr Massini as a stallion.

“We started with our own mares – the likes of Braceys Girl, Lizzie Boon and Moon Catcher, who won at Cheltenham and Aintree, but over the past few years, we’ve made a conscious decision to concentrate on quality.

“We have a sister to Sam Spinner in foal to Jack Hobbs, a half sister to The Giant Bolster by Shamardal in foal to Sir Percy and a close relation to one of the leading chasers in France, Saint Goustan Blue.”

So what does David, who had his first home-bred winners in 2008 with Margam Abbey and Joshua Squashuar, love so much about breeding?

“The thing I like best is bringing them up from zero,” he says. “If you’ve bred them, that’s a big buzz.

“I go to Ireland and know how many you have to go through to find the one . . . and you pay telephone numbers. With breeding you have to wait, but now it’s starting to work and it’s satisfying to see such positive results.”

Unsurprisingly, as well as breeding top class horses, one of David’s ambitions is to win the Dunraven Bowl – the ‘Welsh Foxhunters’, but he’s also fixated on success in the Cheltenham or Aintree equivalent.

“When Goolds Gold was sixth (at the Festival) to Elegant Lord, it was the closest a Welsh horse had gone in a long time,” he said. “Then Hoopy would have been fourth the year Oscar’s Delta unseated on the run in, but the jockey was sleeping and pulled him up,” says David tongue in cheek with Bradley looking on.

“When we ran Coolvawn Lady at Aintree, the two mile six furlong trip would have suited her.

“I told (jockey) Pip Jones to go down the outside but she decided to follow someone round the inner, they fell at the first and she was brought down. It was still a great day though – we went up there in a helicopter, really enjoyed the whole experience and gave me the buzz to want to do it again.”

Talk turns, as it so often does, to what David would do if he were in charge of pointing for a day.

“Nobody’s ever asked for my advice,” he said, laughing when I say – taken aback – “But you’re Mr Welsh point-to-pointing.” “Wearing my Connor Brace hat when jockeys turn conditional, they should still be able to ride in point-to-points until they’ve ridden a certain number of winners.

“They’re not all Connors or the Bowen brothers and it would give them more experience.”

The role of four-year-olds in the sport often provokes lively debate and David has his own views on how to address the issue.

“You get no money for four-year-olds over here because there’s the perception that Irish pointing is better,” he says. “They should change the framing of races.

“There should be four-year-old only maidens, races for four and five-year-olds, ones for horses that haven’t run under rules and – if they had four-year-old allowances in the Autumn – there would be more runners.

“Take Paint The Dream – he’s only four, but he doesn’t get an allowance.”

Another bone of contention for David is the funding of the sport.

“The Levy Board could do more to help keep the sport going,” he said. “It costs a fortune to put on a point-to-point and there aren’t enough farmers and volunteers to run it, plus we seem to have little say on how funding is distributed.”

He’s also a keen advocate of more central support for pony racing, being a keen supporter and national sponsor.

“All the top jockeys now come from pony racing, yet it gets nothing,” said David. “A pound from every Hunter Certificate goes to Retraining of Racehorses, but surely it should be given to the grass roots of our sport? It needs more support.”

I visit David soon after Peter Wright’s appointment as the Chief Executive of the PPA is announced. So what advice does David have for the new incumbent of the top job?

“More consultancy with owners and trainers and more decisions made by the PPORA, not the BHA. I’d tell him to go round different point-to-points across the country and get opinions from those at the coal face before making any decisions.

“Everybody involved works so hard – the committees all deserve a medal. We do this because it’s our passion – that’s why we get up at four in the morning, not for the money.”

“I like the bumpers,” says the leading Welsh rider. “They’re good for young horses. In Ireland, they have schooling races, so some horses have been out four or five times before they run in public.

“Some youngsters need that experience. And pony racing helps. More young jockeys are coming through.”

David chips in, saying: “Years ago, it seemed that if you didn’t have an Irish accent, you couldn’t ride.

“Alongside Bradley, and before him James Tudor and John Mathias, Wales seems to have a ready supply of young talent in the saddle – Sean and James Bowen, Connor, and the emerging Jack Tudor.”

Why are there so many good Welsh riders?

“Because I’m good at training them,” says David.

“I’ve always loved it and still do,” he added. “I can’t wait to get up in the morning and, when you turn up in the lorry, you get a tremendous welcome.

“It’s not the same atmosphere under rules, there’s not that camaraderie that you experience among the pointing fraternity. The only person you don’t want to see is the guy with the favourite!”

IN THE SADDLE: BRADLEY GIBBS

Bradley Gibbs, aged 24, is David’s stable jockey and will take most of the rides now grandson Connor has turned professional with Fergal O’Brien.

Bradley’s first winner was at Lydstep, in the first ever pony race held in Wales, and he has ridden 131 winners between the flags and 13 under rules since opening his account over fences in 2011.

“It was on Cinamon for dad,” recalls Bradley of his maiden success. “Dad (father David Gibbs) has always had pointers and I started off in pony racing.”

“I was third last year and would love to be champion. I’m a bit heavy to turn professional so I’d love to win a Foxhunters – I’m not fussed which one.”

Only just come in, so there’s no rush and he’ll start in a point in January. He’ll be aimed at a Foxhunters and it would be nice for him to go to the Dunraven Bowl as well. He can be temperamental in the paddock – he jumped the rails at Chaddesley Corbett when he saw the horseboxes.

A home-bred by Brian Boru out of a black-type French mare. Second on his debut then would have won standing on his head here at Pyle when he clipped the second last and tipped over – I built that fence myself. We called him Paint the Dream because his stable name is Vincent and, when Van Gogh was asked what inspired him, he said ‘I just paint my dream.’

He’ll run early and should stand out in a Maiden.

Won five last year, including three Opens and is a lovely straightforward horse with good legs who eats up. He’ll go back pointing after a spell under rules and will run in Opens. He was fourth in the Dunraven Bowl last year and may go for that again.

He’s some horse. He’s enthusiastic, he jumps and gallops and at home, he eats everything and never shows off. If we could buy a stableful, they’d all be like him. I wish he’d been around when I was riding!

We bought him from Tim Vaughan for Connor to ride and Tim wouldn’t have sold him if his son had been old enough to ride. He’ll be out early for Jack Tudor, then run in Opens with Bradley.