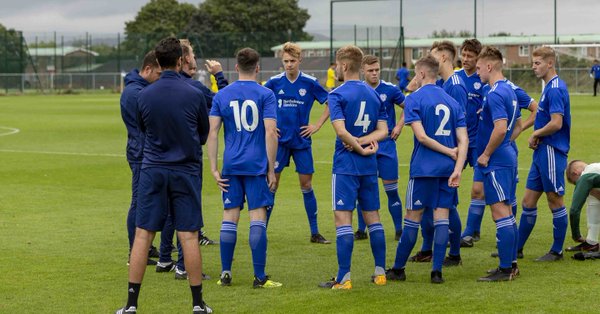 A pre-match chat for Cardiff City's under-18 team.

The young Bluebirds won 3-1 against Radomjie’s under-19 team and 6-4 at Leicester.

Joel Bagan, Siyabonga Ligendza and Kieron Evans scored City’s goals in Slovania, while Kieron Evans (2), Isaak Davies, Ligendza, Cian Ashford and a Leicester own goal made up their tally in the second fixture.

Cardiff were due to play two matches at Leicester, but after Blackpool cried off the two remaining clubs played two 45-minutes halves plus an extra 30 minutes period.

Three City teams have been away on tour – Neil Warnock’s group to North America, Andy Legg’s under-23s to Devon and Cornwall plus the under-18s going to Slovenia.

They have played 10 matches in total between them, winning eight and drawing two.

Coach Matthew Bloxham’s under-18 squad, which included six under-16 players, spent a week in Slovenia to kick off their 2019 pre-season campaign.

Tom has a twin brother, Troy, who is still with AFC Wimbledon.

The Bluebirds under-18 team play AFC Bournemouth at Cardiff International Stadium on Tuesday (1pm), while the under-23s travel to Stoke City (2.30pm).