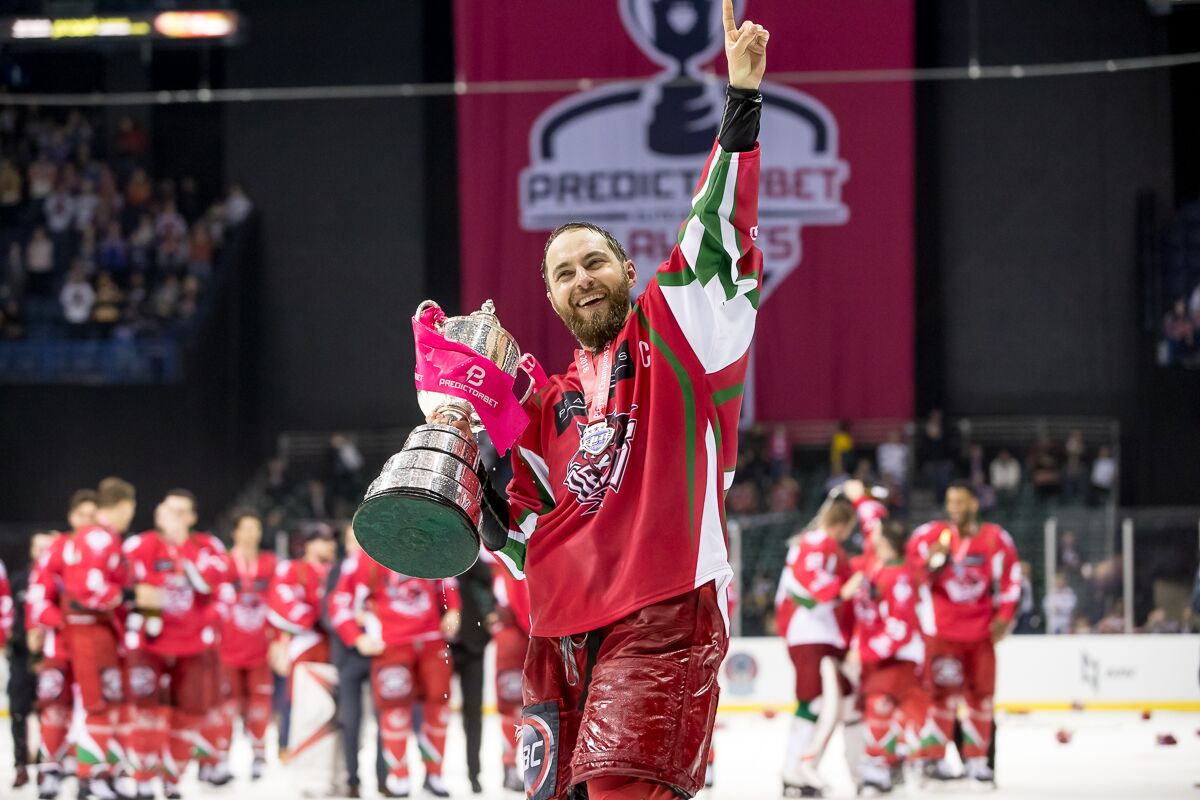 Dai-sport journalist Terry Phillips with a personal tribute to Canadian Jake Morissette, the most successful Cardiff Devils captain in the club’s 33-year history. ‘Mo’ has retired from playing.

Jake Morissette is fearless on the ice. He isn’t a fighter, far from it, but has a fierce pride in playing for Cardiff Devils – and a love for the club which is unsurpassed among players.

His input to Devils’ success has been remarkable and he has never been given the credit he deserves by many Devils fans.

Is there a case to argue that his shirt number, 47, should be retired and hang above the ice alongside Steve Moria, Shannon Hope, Doug McEwen and Co?

Personally, I would say yes, but that is for others to ponder.

‘Mo’ is selfless, a quietly-spoken leader on and off the ice who gave everything for the team no matter what it cost him.

Watching Morissette throw himself in front of a puck flying at speed off an opponents stick – something he did countless times – made me wince. But the man never hesitated to put his body on the line.

He was the forward head coach Andrew Lord turned to when a line was struggling to find the fluency needed. Morissette would be asked to join that line and, inevitably it seemed, there was an immediate improvement.

Whether it was the first, second, third or fourth line, ‘Lordo’ would turn to his fixer for help – and ‘Mo’ never let him or the team down.

The two men grew close between 2004 and 2008 when they played college hockey together for four years at Rensselaer Polytechnic Institute, based in Troy, New York. Morissette completed a degree in mathematics.

They also played on the same SC Riessersee team In Germany and then got together again at Cardiff Devils six years ago.

“He was an old school hockey player who treated the game with honour and loves the Devils,” says Lord.”He never wanted the glory or the praise publicly.

“Nowadays many players are loved for how they interact on the internet. Mo was never on social media and was never involved in the gossip around the league.

"Morissette… The nets empty, it's over! It's the Cardiff Devils. The wait is over"

“He was, though, a total pro who gave everything he had to his teammates and the club. He did so much for the guys that was never talked about or known, he was just there for them and he was always in the running for player’s player every year.

“The same goes for the community, where he was always doing events or making a kid’s day by giving them a high five, a smile or throwing a puck over the net after warm-up.

“Mo was such a dependable and reliable player for us. A great penalty killer but also so good defensively 5on5. He was always out in the final minute of a game and I will never forget his empty net goal to clinch our first play-off title in 19 years, against Sheffield.

“Time flies and his role changed last year, but Mo was such an offensive force for us the first three or four seasons in Cardiff. He always played fast, simple and to the game plan which made him so easy to play on a line with because he was always doing the right things.

“Mo was one of the lowest maintenance players I’ve ever had, never complaining and was always team first.

“The number of injuries he played through after blocking shots without anyone even knowing was incredible. The guy would go through a wall for his teammates.

“His work rate day in, day out at practice and in games was second to none. All he wanted to do was win and he did a lot of that as a Devil.

“I have known Mo since 2004 and this ends an incredible time we have had together in hockey. He was a huge part in turning around this club the past five years and his success as our captain speaks for itself. We will miss him greatly.”

Morissette played well over 300 matches for Devils, scoring 80-plus goals and 227 points. His input to Devils’ successes is immeasurable.

A club tribute to Morissette said his ‘professionalism and dedication’ are hard to match.

He took over the C for the 2016-17 season after Tyson Marsh retired and was the first Devils captain to lift a league trophy in 20 years.

Club managing director Todd Kelman says: “Mo was one of the few guys we kept when we took over the team and thank goodness we did.

“He is one of the best team players I have ever had play for a club I was involved with. He does whatever it takes to win and always put team success ahead of his own.

“He played on our top line for two years, then it seemed like whenever we felt someone was struggling or a line needed to get going, we would switch him onto that line and things would start to pick up.

“He blocks too many shots to even count, Is one of the best penalty killers I’ve ever seen in this league and would go through a wall for his teammates if it meant they had a better chance to win. A total pro and a great captain.

“I don’t worry about him as he moves into a career outside of hockey. When people bring a good attitude and a great work ethic to anything, which I know he will, they tend to succeed at whatever they choose to do.”

Morissette has talked about becoming at actuary -experts in risk management and use their mathematical skills to measure the probability and risk of future events – after ice hockey, saying: “I’ve working towards starting a career as an actuary for quite some time now.”

A sad day to see a @cardiffdevils legend retire. Needless to say, you don’t become the captain of a multiple championship club without being a very special person. Thank you Mo. Those same qualities will make you successful in whatever you do next. #Devilsfamily

Cardiff Devils: ‘I love this team, the city and the fans. I could not see myself playing anywhere else.”

Best Devils team-mate: ‘There have been so many good and tough players here. Joey Martin is consistently one of the best players in the league and Andrew Hotham was the same, but there are also guys like Mark Richardson who plays such a solid game and is so reliable.

“As far as the toughest, Josh Batch and Mark Louis aren’t afraid to mix it up.”

Favourite NHL player: ‘I watched a lot of NHL hockey and would try to add things to my game from different players that I thought would work for me. My favourite player was always Trevor Linden’.

Greatest ice hockey achievement: ‘Being on a championship team is what we all play for, so I would have to say the trophies we have won in Cardiff.’

Why number 47?: A junior teammate and I used to joke about the number 47 and when I first came to Cardiff my first three or four requests were denied so I asked for number 47’.

Why ice hockey?: ‘I always loved hockey when I was a kid and my older brother played so that kind of got me into playing.

“All three of my brothers played hockey growing up so the winters were really busy for our family, but our house was right across the street from the arena so it made it a little easier on my parents.’

Other sports in Cardiff: ‘I have loved my time in Cardiff, the people here are great and I love the city. I attended Wales rugby game have been to watch Cardiff City.

‘I had never been to a rugby or football game before and was excited to see both and extremely impressed.’

Love of fishing: “Back home in the summer I try to spend as much time fishing as I can with my dad and brothers. We mainly fish for trout, but we do some walleye and bass fishing as well.’

Devils fans: ‘I love them, they make a great atmosphere at our home games and are the best fans in the league. Can’t thank them enough for their great support.’