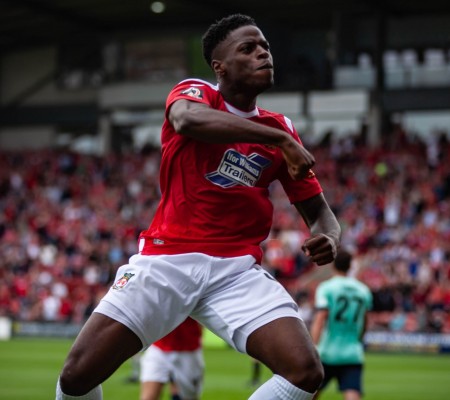 Wrexham are in the Vanarama National League promotion chase for the long-haul this season – and they will prove that over their next two fixtures.

The Dragons will travel almost 1,000 miles to play Boreham Wood in Hertfordshire, a town 12 miles from Charing Cross, and then Dover in Kent.

Manager Bryan Hughes and his team will spend 18 hours on their coach to the two fixtures – seven of those going to Boreham Wood and 11 to Dover.

They will be lifted by a 2-1 win against Barrow at the Racecourse in their opening fixture when they recovered from 1-0 down at half-time.

“I have a lot of belief in these players,” said Hughes. “We addressed a few things at half-time and they showed great character to come back in the second half.

“It could have been more. We had numerous opportunities, but we’ll settle for a win.

“Barrow scored early from a set piece, like they did last year, but we’ve learned from that. You could see the characters come out, especially at the start of the second-half.

🤷🏻‍♂️ it was all going off vs @BarrowAFC! @Jay_Hoops scored on his debut and the net broke!!

“We started on the front foot and went at at Barrow, scored an early goal and settled right into the game.”

Barrow opened the scoring through Josh Granite, while JJ Hooper, making his Dragons’ debut, replied with a second half header that literally broke the goal.

Moments later scorer turned provider when Hooper beat a defender and crossed to the back post for Bobby Grant to nod home and win the match.

“JJ was fantastic,” said Hughes. “He led the line well. He was always one of the players high on my list when it came to off-season recruitment.

“The goal will do his confidence the world of good and he added the assist as well.

“It was a fantastic bit of hold-up play and a little shimmy to set it up and a fantastic cross for Bobby at the back post. The players are all feeding off him as well.

“It’s great for Bobby. I felt he was getting a bit frustrated first-half, but we sorted it at half-time for him to make more of an impact. If you want anyone arriving there at the back post, given Bobby’s form, it’s him.

“Overall, I think we were good value for our win.”

Boreham Wood made the impressive signing of Oxford City striker Kabongo Tshimanga over the summer, a forward who notched 24 goals in the National League South last season.

The Reds began their National League campaign against Barrow with an unchanged starting X1 from that which started the narrow friendly defeat to Crewe Alexandra.