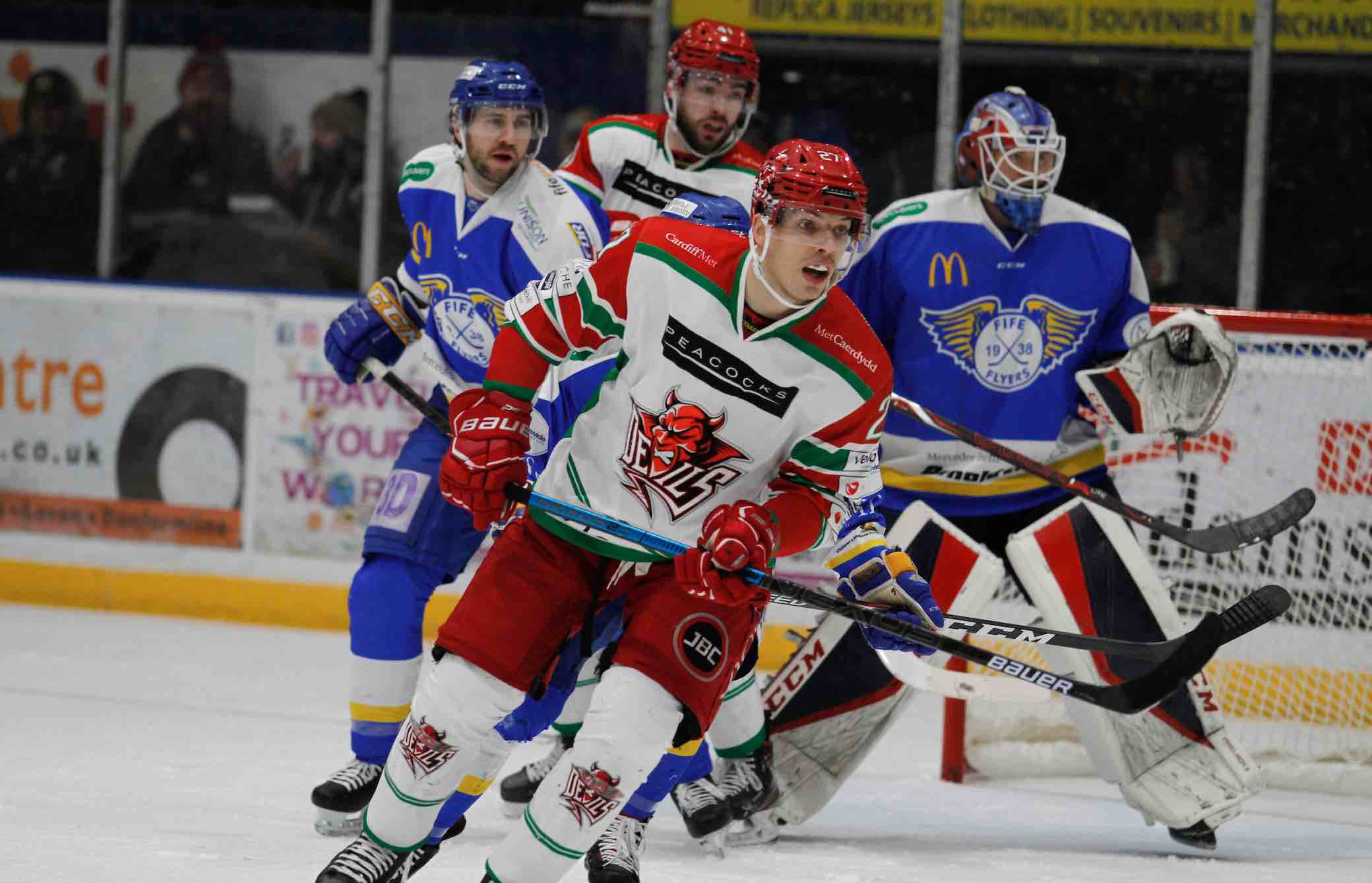 It was Lord’s 350th domestic fixture in charge of Cardiff Devils, while Haddad, nicknamed ‘The Chef’ among team-mates, moved top of the EIHL goalscoring charts with two goals in Kirkcaldy.

Canadian Haddad, from Nova Scotia, scored three goals and three assists during weekend wins against Glasgow Can (5-2) and Flyers (6-4) on their Scottish double-header.

Devils have scored 25 goals in this four games, conceding 12. They have moved to within one point of leaders Sheffield Steelers with four games in hand.

“Winning in Fife is always difficult,” said Lord. “It’s probably the toughest rink to earn a win. It became interesting down the stretch, but we found as way to win.

“I like the way we regained our composure, scored a fifth goal and added an empty net goal.

You were awesome and so was the anthem! Thanks for bringing the noise for the boys. https://t.co/CZJsubkOfH

“We took our foot off the gas a little and that wasn’t good. We had multiple opportunities to put the game away and we didn’t.

“Fife are a good team. They don’t give up and keep coming at you.

“They were throwing everything to the net and that was effective. Their powerplay was giving us trouble and it has this season. We had a couple of big kills and a couple which weren’t so good.”

Fife coach Todd Dutiaume said: “I’m not going to make any excuses. Our first eight minutes of this game were atrocious.

“We were either feeling sorry for ourselves for things out of our control [injuries to key players] or we looked scared to compete.

“The big thing for me is that, yes, we made mistakes, but the guys dug in. Certainly their efforts have to be appreciated and the recovery appreciated.

“I felt bad for the team. I am asking a lot from of a number of individuals and they can be proud of their performance.”

Sean Bentivoglio was recalled to the team after being rested from Saturday’s fixture at Glasgow Clan with Matt Pope sitting out. Bryce Reddick continued his new role among the forwards, having moved forward from D.

Devils led 4-1 after 38-07 before Flyers fought back to draw level at 4-4. Then Haddad scored his second of the game with less than three minutes left Joey Martin added an empty net goal.

Stephen Dixon fired Devils ahead after 64 seconds and Riley made it 2-0 at 7-24.

Marjamaki made it three at 27-52, but the Flyers were on the board some six minutes later through Dylan Quaile.

Haddad put the Devils back into a three-goal lead at 38-07, but Flyers hit back 56 seconds into the final period thanks to a Tim Crowder goal. Carlo Finucci tipped in Scott Aarssen’s shot on the powerplay at 51-19 and they were level at 51-58 when Just’s shot was blocked by Ben Bowns only for Paul Crowder to finish from the edge of the crease.

Haddad’s shot from the point went all the way through at 57-08 to put the Devils back ahead again – and take the forward to the top of the league’s goal scoring charts – before Martin scored into the empty net with 52 seconds left.

The next test for Devils is their Challenge Cup quarter-final against Belfast Giants in Northern Ireland on Wednesday evening.