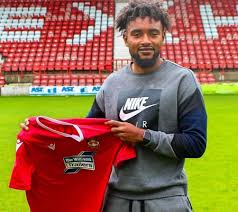 Adi Yussuf, Wrexham’s Tanzanian international, is on an FA Cup mission this weekend and the striker has special opponents in his sights.

The Dragons have been drawn against Yussuf’s former club Solihull Moors away in the Emirates FA Cup fourth qualifying round.

Zanzibar-born Yussuf had two spells playing for Solihull, scoring 25 goals in all competitions during 2018-19, but is now intent on knocking Moors out of the cup.

“It’s all about Wrexham this weekend,” said the on loan 28-year-old. “I left Solihull on good terms. They gave me the platform to perform and helped me earn a move to Blackpool in League One.

“Now, though, I’m going back to their stadium and hoping we win. I’m a Wrexham player now.”

Yussuf, who has scored 63 goals during his senior football career, netted twice in Wrexham’s bitterly disappointing 4-3 National League defeat at Wealdstone, but was brutally honest after the final whistle.

“Okay, I scored twice, but it’s not about me,” said Yussuf. “It’s about the team and we lost. Overall, I wasn’t good enough.

“I always believe I will score, but my all-round game has to improve and fitness-wise I have to improve.

“The match at Wealdstone was my first competitive 90 minutes in almost a year. I don’t want to be too harsh on myself because I am a positive guy.

“I will be better next time and in time I can offer more than just goals.

“I’ll take the criticism because I wasn’t the best and if my overall performance had been better we could have scored more as a team. But there is more to come from me.”

Wrexham have suffered three defeats in five National League fixtures so far this season including a 1-0 loss at Solihull when Yussuf was ruled out by injury.

Manager Dean Keates was furious with his Dragons and admitted: “There were harsh words said within the group.”

“Nowhere near good enough for this football club,” said Keates of the performance at Wealdstone.

“Defensively that was one of the worst any of my teams have ever been.

“All four goals conceded were our own fault. We are not ruthless or not in the 18 yard boxes.

“There will have a debrief and we need to learn from it. We had 15 attempts on goal and scored three – not good enough!

“Back-to-back fixtures against the bottom two teams in our league and we were turned over twice. Did we do enough to earn the right to win. There are question marks.

“One or two didn’t get to where they needed to be. Certainly, harsh words were said within the group.”

Wrexham currently have three players in the treatment room and Keates said: “Mark Carrington we lost in training and out of the three he will be out the longest.

“Jordan Ponticelli suffered a little tweak, a slight recurrence of his hamstring injury, and it looks hopeful for the Solihull game.

“Anthony Jeffrey is not too far off and he, too, could be back next weekend.”