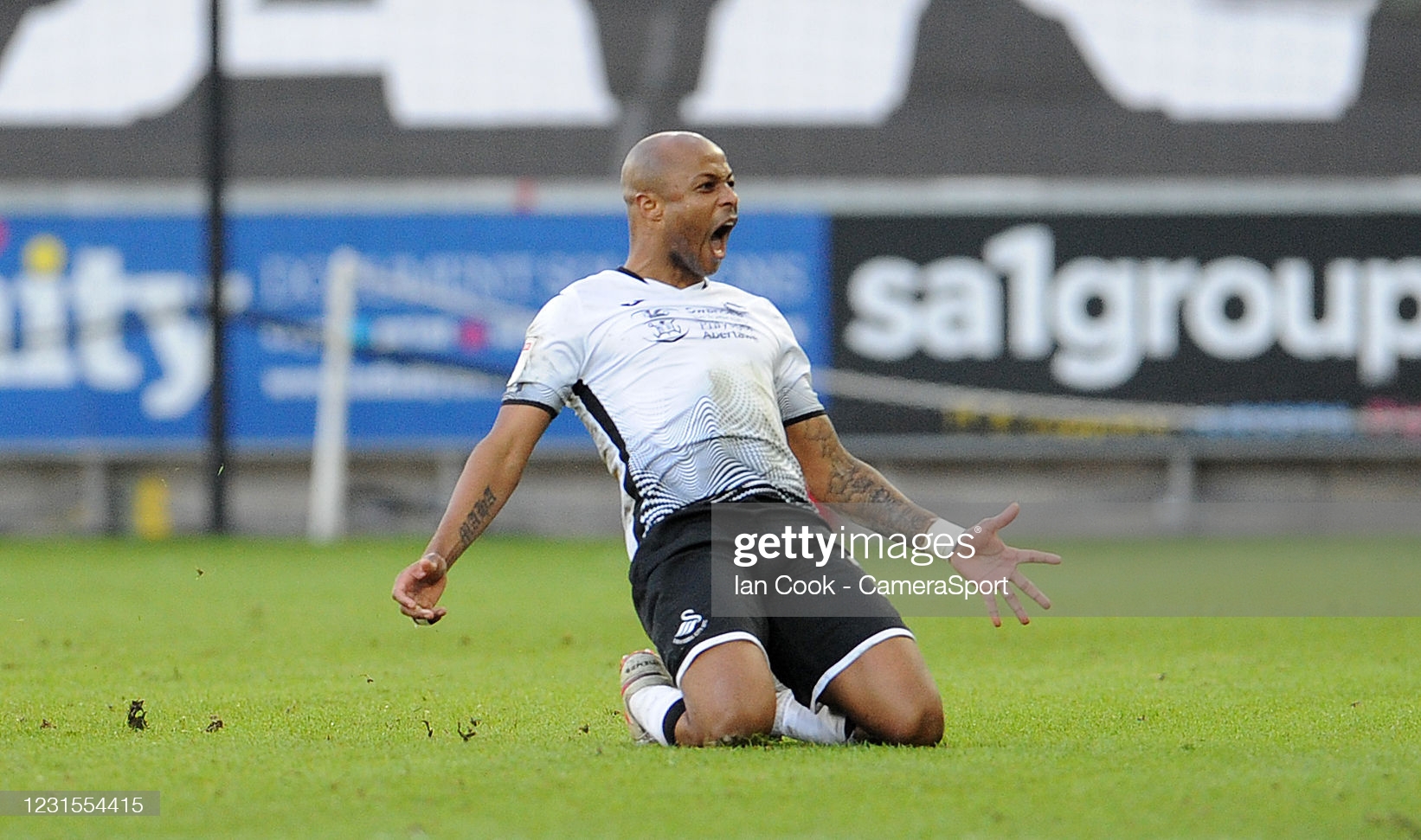 Andre Ayew is currently not among the Ghana players preparing for two international matches in the forthcoming window. The Swansea City striker is still with his club and Jack Hammett reckons all Swans fans will be hoping it stays that way as the promotion push enters a critical phase.

Even though Andre Ayew did not earn the assist, nor get on the scoresheet at Luton, the commentators and pundits on Sky Sports’ coverage of Swansea City’s latest win at the weekend were busy name-checking the club’s talisman.

In making a selfless run into the six-yard box, the Ghanaian striker took what seemed like the entire Luton defence with him, allowing Yan Dhanda to pull the ball back to Conor Hourihane who put the Swans ahead after just three minutes.

In his last five games, Ayew has netted five times, including three crucial penalties in against Stoke, Middlesbrough and Blackburn to give Swansea City more points than their rivals – and even some of their own fans – believe they deserve.

That sacrificing run on Saturday was as important to the Swans’ promotion push as those five goals.

After recent matches, there been a few grumbles amongst supporters about the performance of their side, but one thing almost all members of the Jack Army can agree on is the never-ending effort of Ayew.

In the last few games, it’s been clear to see just how much Ayew is committed to the cause. And how vital to it he is.

At times a lone figure at one end of the pitch, Ayew is known to battle two, three, four defenders at a time, holding the ball up, waiting for Steve Cooper’s other nine outfield defenders to maybe turn their attention to attacking.

It’s often not pretty, but in a results-based game, it’s working.

What also works is his contribution to defending as well.

If you’re unfamiliar with watching Swansea this season, you would be forgiven for being surprised that the player who wins most headers defending the Swansea box at set plays is a 5ft 7in centre-forward.

But time after time, Ayew is coming out on top against even the most hardened of Championship defenders in the air.

In a season unlike any other, the football calendar is compact and with an international break coming up, managers are wary of losing players to injury and time away in quarantine.

On March 25, Ayew will be expected by his countrymen to be leading the Black Stars out, wearing the captain’s armband and inspiring his nation.

He’s scored three in his last three games and shows a similar determination and attitude for his national team as he does at the Liberty Stadium.

Ghana are currently top of their AFCON qualifying group, on goal difference with two games remaining.

A top of the table clash against second-placed South Africa is a critical game, likely to decide who will top the group.

But with a ten-day quarantine in a hotel expected upon return from South Africa, it is quite likely that many from the Ghana squad won’t be taking part in this international break.

Their Premier League and Championship managers are intent on using FIFA guidelines as a justification for not releasing players who would be captured by the quarantine restrictions.

The preliminary Ghana squad being called up for international duty currently contains no players residing in the UK.

Thomas Partey at Arsenal, Daniel Amartey at Leicester and Crystal Palace duo Jeffrey Schlupp and former Swan Jordan Ayew – Andre’s brother – have all been left out of the 24-player camp before the upcoming matches, although there is still uncertainty over whether or not call-ups could still follow.

A rest for Ayew would be welcomed by Swans head coach Cooper, before matches start to pile up in the race for promotion to the Premier League.

For Ghana, though, the absence of their captain will be heavily felt.

If you asked most Swansea City fans, “would Swansea be in the position they are now without André Ayew?” They would tell you vehemently that they wouldn’t.

That feeling would be shared in West Africa about Ghana’s qualifying campaign and its likely success. Hopes of achieving something in January 2022, the third date planned for the tournament due to the pandemic, always seem to hinge on the Ayews.

So, whilst the Jack Army enjoy their brightest spark in this difficult run of form, spare a thought for Ghana fans, five thousand miles away, if they end up watching their side play without their most revered and charismatic performer.

One thought on “Andre Ayew Is Still In Wales . . . Swansea City Fans Hope It Stays That Way And Ghana Call Goes Unanswered”