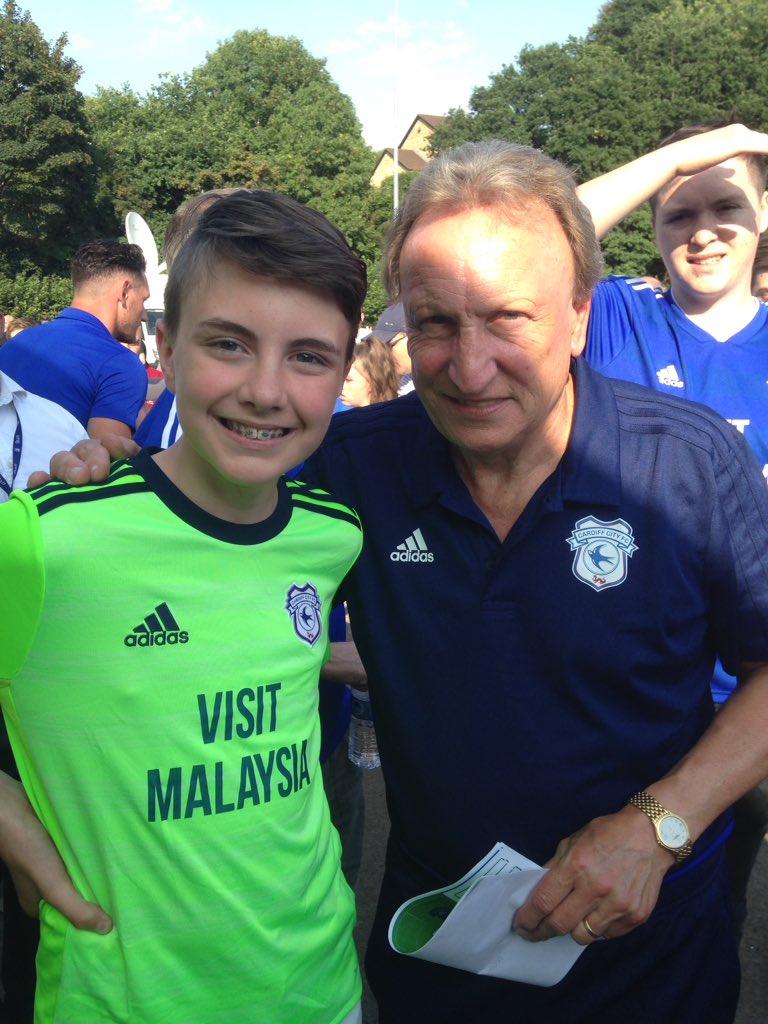 Cardiff City manager Neil Warnock pictured with a Bluebirds fan at Taffs Well a year ago.

They followed a 3-0 win against Taffs Well on Friday with a 2-0 success at Truro.

It was a noon kick-off in Cornwall – the start was brought forward from 2pm to avoid a clash with the France v Croatia World Cup final – and it was a hot and sunny day.

Andy Legg and Jarrad Harvey were officially in charge of the City team, while Warnock stood by the side of the away dug-out assessing both senior and younger players.

Republic of Ireland international Pilkington fired Cardiff ahead just after the half hour, while Glasgow-born Paul McKay made it 2-0 after 51 minutes.

There were moments of skill from Tomlin as he worked to open up Truro, who are the highest ranked Cornish club playing in the sixth tier of English football, while Pilkington worked hard and scored.

Warnock’s assessment of Pilkington, Tomlin and Camp in particular is crucial as he ponders the 25-man Premier League squad he must name when the transfer window ends.

Camp, one of four senior goalkeepers in the Cardiff squad along with Neil Etheridge, Alex Smithies and Brian Murphy, made his second appearance during pre-season.

Camp has not conceded a goal in 120 minutes football, having played for an hour against Taffs Well in a 3-0 win and at Truro before being replaced by 21-year-old new signing Matthew Hall in each game.

Hall made an outstanding, full length save from Truro centre-forward Lloyd Gardner soon after going on and he, too, kept a personal clean sheet.

When Cameron Coxe suffered a muscle injury and limped off 15 minutes from the end Wootton returned to the action.

He had been replaced by Scott McLean after half-time.

Tomlin and Pilkington also went off 10 minutes from time when they were suffering on a surface baked hard by the sun with Jamie Veale and new substitute Danny Martin going on.