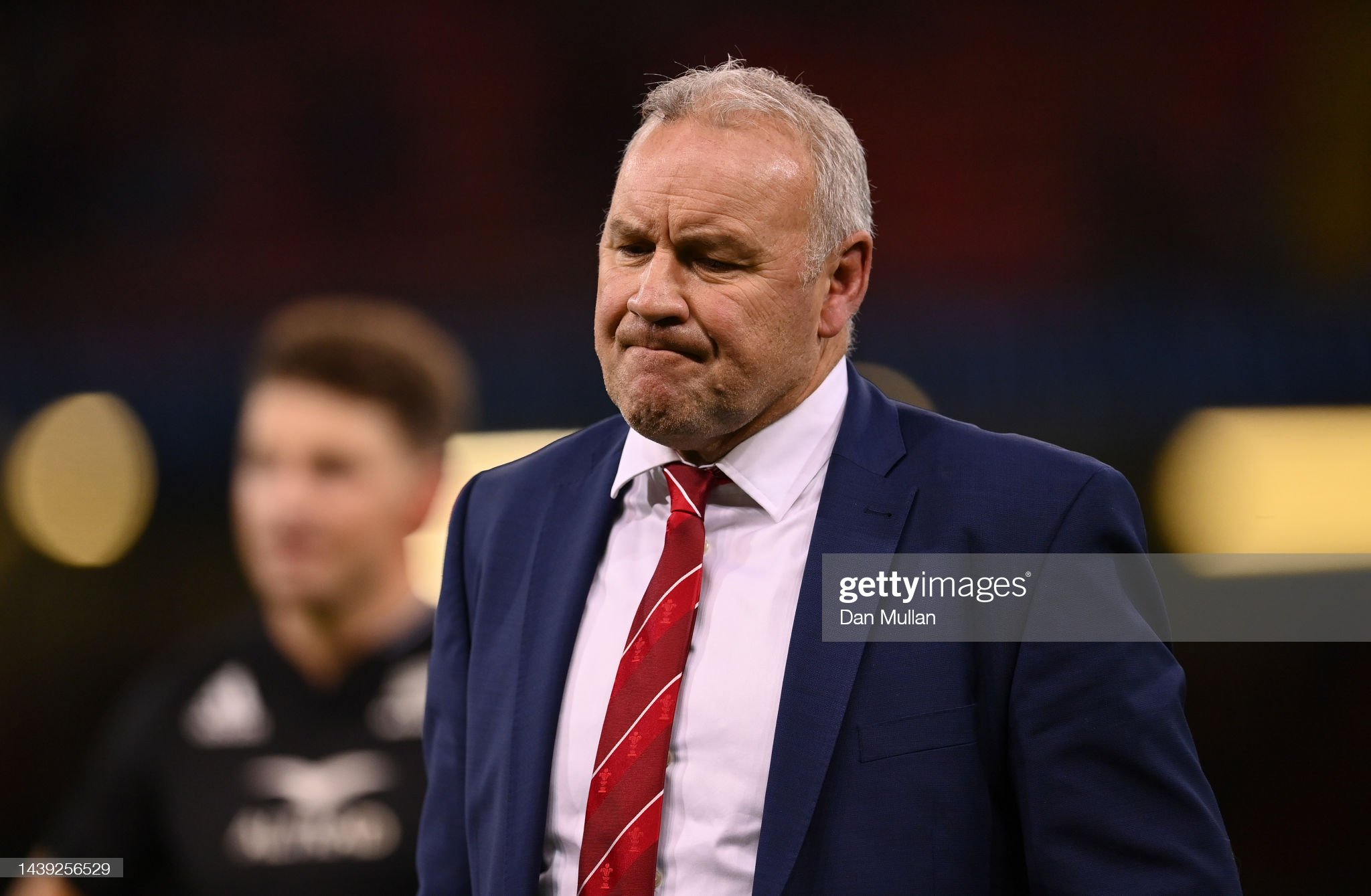 Wayne Pivac has a lot to think about. Pic: Getty Images.

Wayne Pivac is a former copper, so he knows the law.

And the law is this: There is only one thing that protects a national rugby or football coach through the tough times – results.

A coach can be the shrewdest man-manager, he can schmooze the media, or play a clever political game with his bosses in the governing body.

But the only thing that offers a shield over him when the flak starts flying are results on the field.

It has always been that way. It always will be.

Had Wales beaten Georgia at the weekend, then talk of Pivac losing his job would have been muted, if not exactly silenced.

Wayne Pivac and Stephen Jones walk out before the final whistle pic.twitter.com/lbCXRWiBMo

But losing at home to a team Wales had never lost to before, has handed Pivac’s enemies a stick to beat him with.

Many fans have long since lost patience with Pivac and that will exert pressure on the Welsh Rugby Union – never the most strong-willed organisation – to consider changing their coach just 10 months out from the next World Cup.

So, if Pivac does go, who is in the frame to replace him?

There is no one outstanding candidate who is instantly available, so the field is open.

Here are some possible contenders:

Him again? Well, stranger things and all that. Gatland is currently in the UK earning a tidy crust for providing not very demanding punditry for Amazon Prime.

He handed over the reins to Pivac three years ago after winning four Six Nations titles, three Grand Slams and taking Wales to the semi-finals of the 2011 and 2019 World Cups.

His contract with the Chiefs, though, runs to next June, so there would be compensation to pay, plus the likely £500,000-plus he would demand from the WRU to climb back into the cockpit and take over a plane heading for a crash-landing.

Another step back in time – or maybe into a bold new future. Edwards recently signed a new long-term deal with France, but he loved his time in Wales and often said it reminded him of Wigan, which Paris probably does not.

Wales’ defence has been noticeably more porous since he left, but as well as what would be huge compensation on top of his wages, there’s something else to consider.

Edwards is a back room guy, not front of house. He has never been the ultimate authority and the prospect of him fronting press conferences in his straight-talking northern tones would give the WRU the heebie jeebies.

Watching the Georgia game, it was notable that Wayne Pivac, Stephen Jones and Gethin Jenkins showed no emotion and were totally inanimate throughout the game. A stark contrast to the raw passion of Shaun Edwards who often made his way to the pitch waving his arms.

Now, we’re looking forwards rather than back. Robertson has generally been regarded as the best non-Test rugby coach in the world for the work he has done in New Zealand with the Crusaders.

In fact, he might just be the best coach in the world, even including those currently working in international rugby.

He’s a man in demand and there are others sniffing around, including England, post-Eddie Jones. But here’s the thing – why would Robertson want to coach Wales (other than for the money) if he’s the prime candidate to take over the All Blacks after Ian Foster is shunted aside?

There are not many Welsh coaches in the mix, if we’re honest, and Young probably remains the best qualified, even though there will be some who say his best days are already behind him.

But if it’s experience you’re after then the 55-year-old has a very decent record. He had success in his first spell at Cardiff, even if his second has so far been underwhelming.

That may say more about the state of the regional game than it does about his coaching as Young had an impressive record at Wasps and the plus point would be that Cardiff would be unlikely to stand in his way.

Tag a mate who thinks they can dance like Scott Robertson.@crusadersrugby Head Coach and legendary celebrator of @SuperRugby titles.

After Saracens’ Mark McCall, the Exeter Chiefs supremo has been the most successful coach in English rugby for a decade and would tick many boxes for Wales.

A motivator, a shrewd tactician and no-nonsense operator, he seems not to interest Twickenham officials for the England job – perhaps because he hasn’t got the right old school tie.

A move into Test rugby now might be the right timing for both Baxter and Exeter as things feel as if they have hit the top of the curve.

Lam was once in the 1991 Western Samoa team that knocked Wales out of the World Cup, so this might be a natural squaring of the circle in some ways.

Currently at Bristol Bears, Lam’s teams are renowned for playing with attacking style and panache and his time at Connacht, and with Samoa, show he can make a little go a long way.

Known for his outspoken views, he’s another who might frighten the suits in Cardiff and there’s another key issue here of a big bill to pay the Bears. His contract has a whopping five more years to run.