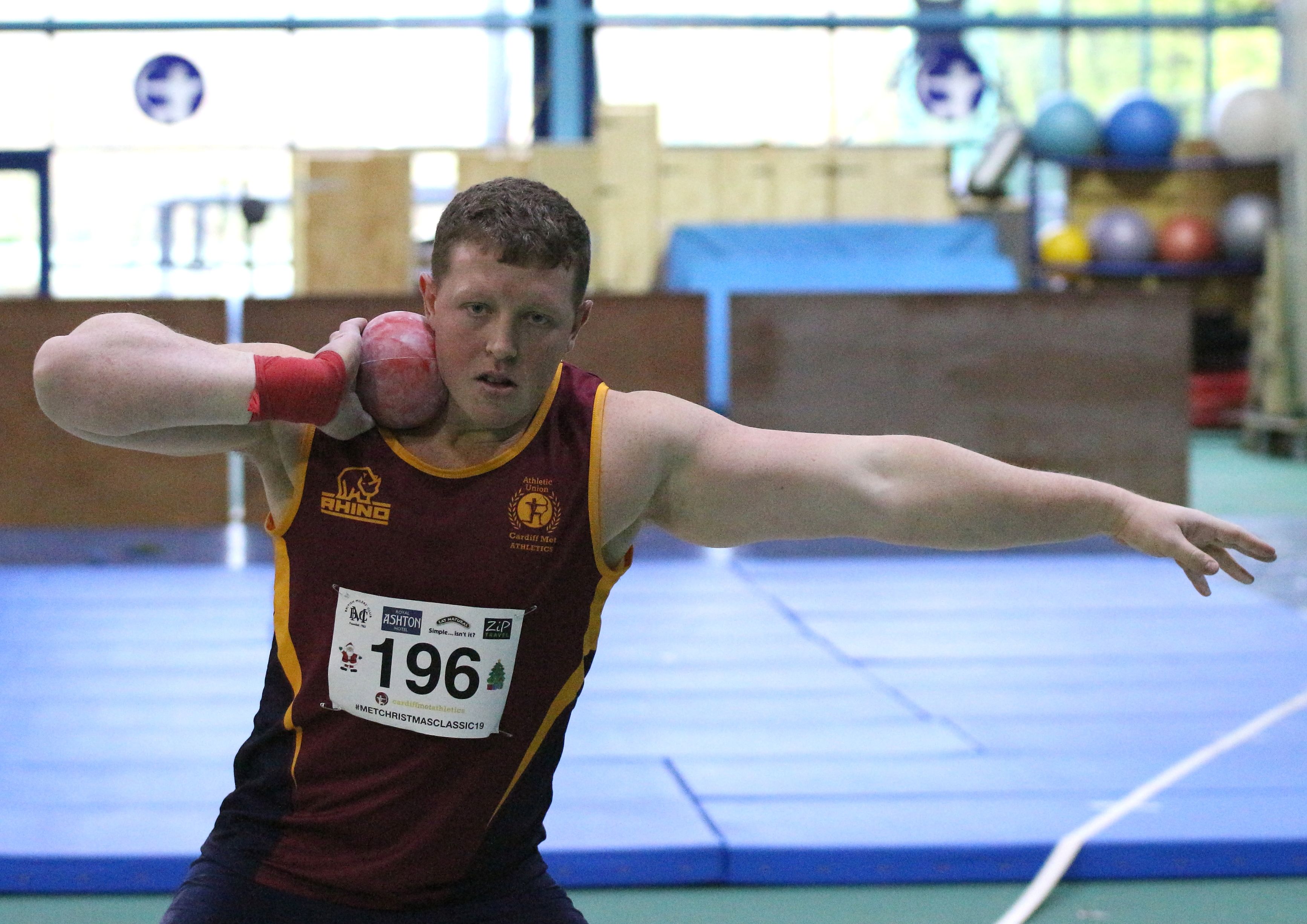 Harrison Walsh in action for Cardiff Metropolitan University at the annual Christmas Classic organised by the university. . Pic: Owen Morgan

Just a week before the Swansea RFC and Ospreys product was due to play for Wales under-20s against England, he sustained horrendous leg injuries in a freak accident playing in a club match.

Such was the severity of the damage, it not only ended his rugby ambitions but left him with only partially movement and no feeling in his right foot.

As a result of his professional rugby playing dreams being shattered, Walsh found it difficult to watch the game he had excelled in from a young age.

But having subsequently found success in his adopted sport of athletics, Walsh has come to terms with the end of his rugby career to such an extent he was able to enjoy watching former team mates playing at this year’s Rugby World Cup.

Asked whether athletics had now taken the place of rugby in his life, the 23-year-old, who this summer broke the F44 shot put world record, said: “Yes, I think it has.

“It’s very different. Obviously, we can all see the differences in rugby and shot put, they are individual and team sports.

“But to answer your question, it’s weird and sometimes it can get kind of emotional, but I don’t remember a lot of rugby now because I have spent so long not in the game.

“I’ve spent, four and a bit years, coming up to five now, not being able to play rugby. So, in actual fact, I’ve lost touch with it a bit now.

“Funnily enough, I’ve just watched the entire World Cup and a lot of my mates were playing there.

“I’ve played with people like Dillon Lewis and Owen Watkin. Adam Beard . . . I grew up with Adam Beard! I remember playing with him at Swansea schoolboys.

“But I started to actually enjoy watching rugby again during the World Cup, whereas I couldn’t enjoy it before, it was too raw, I wasn’t done with it.

“But I think as soon as I started to really focus on throwing and saw some success from it, it now becomes an enjoyment to watch my friends playing rugby.

“That’s something I think that throwing has really helped me with, enjoying watching rugby again. I accepted it before, but now it’s much more accepted for me.

“It’s just something I did and it’s something that got me to this point. I don’t think I regret what happened . . . well, you can’t really can you? There’s no point in regretting it.”

Walsh spent two years trying to rebuild his right leg along with his rugby career and it was while coaching an Ospreys junior team that David Jones, a fellow coach and a sport and health manager with the local authority, suggested he try out para athletics.

Walsh has improved to such an extent that he shattered the F44 shot put world record with a throw of 15.73m last summer at the Para-athletics Grand Prix at Grosseto in Italy. He has a personal best in the discus of 51.23m.

The Mumbles-born thrower admits setting the new global mark came as a complete surprise. “At first, they were saying to me, ‘you’ve broken the world record, well done’ and I was saying ‘I can’t have, I can’t have’. I didn’t even know what the world record was going into the competition.

“So it was amazing. It was an amazing couple of weeks as well, just getting some real satisfaction from throws and starting to really enjoy it.”

Having established himself as a world class competitor, the Disability Sport Wales Para Academy athlete is looking forward to the New Year and the challenges ahead.

“I’d like to go to the Europeans, firstly, so hopefully that will be my first opportunity to get a GB vest, which would be amazing and then just see how it goes from there.

“We are training really well, all our numbers are up distance wise from last year, so it’s going to be an exciting year, we are all looking forward to it.”

Walsh doesn’t mention next summer’s Paralympics, so I ask whether Tokyo is on his radar.

“It’s in the back of my mind,” he says cautiously. “But I’m not going to say too much, you know what sportsmen are like, we don’t want to say too much in case.

“The Europeans will be more of a target, and then the Paralympics would be the cherry on top.”

Does the experience he went through as a rugby player have any bearing on his reluctance to look too far ahead?

“Yes, that would be a considerable part of it,” he replies. “You don’t want to count your chickens before they’re hatched do you?”

Currently everything is going in the right direction. Walsh spoke to me after winning the shot put at last weekend’s Cardiff Metropolitan University Christmas Classic at NIAC.

“The distances were ok,” he says of his competition winning series of throws. “But it’s December, when you consider it was further than I threw last year at this time and the amount of training we are doing now.

“I work full-time with Sport Wales, so obviously we’ve got a very well periodised programme for throwing in the summer. We shouldn’t really be throwing well at this time of year, but we are. Technically things are going well and that’s what we’re focussing on.

Walsh, who earlier this month was named in the British Athletics Paralympic Futures Academy, says he is revelling in his training environment alongside the likes of multiple world record holder and serial global gold medallist Aled Davies.

“It’s all going really well,” he says. “My coach Josh Clarke is doing really good things with us. I train with a world record holder and world champions, silver medallists, bronze medallists, and I am around people like Aled all of the time.

“Aled has been there and got the t-shirt, but he’s still working hard and that’s what I really appreciate.”

Having found success in a new sport after his rugby career was so cruelly cut short, does Walsh subscribe to the theory that sometimes things happen for a reason in the long run?

“I’m not the kind of person who believes in that kind of stuff,” says Walsh.

“But it’s hard not to consider it when you’ve had this happen to you and then you’ve been given this wonderful opportunity and all these things are clicking into place. It does feel like that Karma type of thing.

“But I think a lot of that is that I just kept training afterwards, I had to do something and something good would come out of it . . . and it has.”

One thought on “Harrison Loving Life As A World Record Holder….And Finally Being Able To Enjoy Watching Rugby Again”