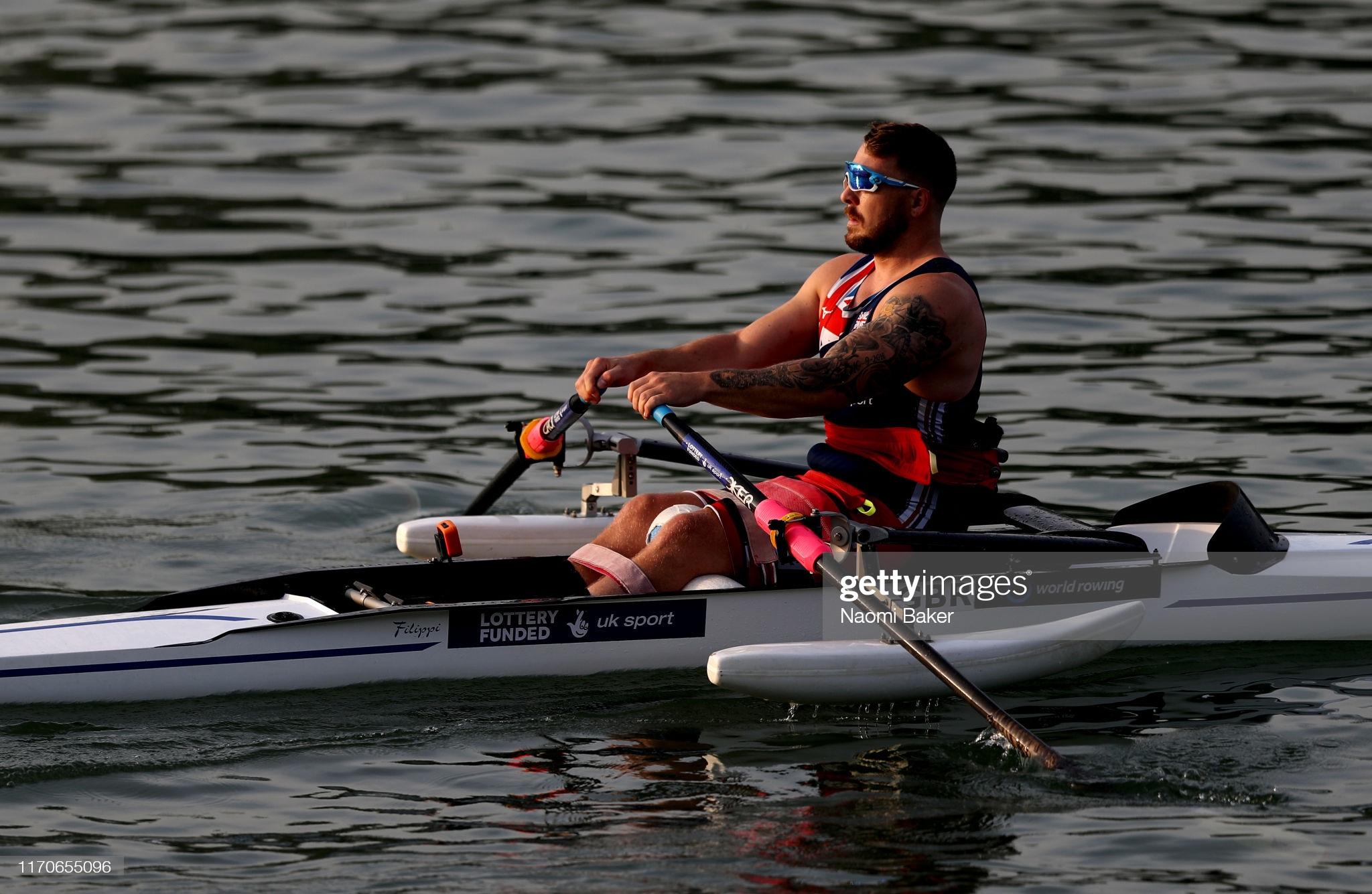 Ben Pritchard is used to arriving ahead of schedule. He joined the British rowing squad just a year after becoming a para rower in 2017 and is now about to compete at his first Paralympics in Tokyo after first targeting Paris in 2024, as David Williams reports.

The last time rowing took place at the Paralympics, Ben Pritchard was laying in a hospital bed, wondering how he was going to rebuild his life.

The Welsh para rower suffered a life-changing cycling accident in 2016 at the very time the best disabled athletes on the planet had gathered to compete in Rio de Janeiro.

Five years on and Pritchard, from Ammanford will be among the elite rowers himself – and a medal contender – when the Paralympic Games begins in Tokyo on August 24.

The 29-year-old, a European silver medalist, will be among the favourites in the PR1 men’s single sculls, the heats for which start on Friday, August 27.

Yet five years ago, he was a patient at Stoke Mandeville Hospital, following an accident that had left him paralysed from the waist down.

“Five years ago, I was laying in a hospital bed and now I’m getting ready to compete in Tokyo. It’s such an amazing feeling, I can hardly put it into words,” he says.

“The Paralympics just happened to be going on the summer I was in the place that had been the birthplace of the event.

“I hadn’t paid much attention to the Games before then. I didn’t even know what Paralympic rowing was, never mind how you got into it.

“But rowing then became part of my re-habbing at Stoke Mandeville. I didn’t really like it at first. It was just hard work and painful.

“But I grew to enjoy it and with the help of many people I realised here was an opportunity to compete again as a sportsman.

“Every kid dreams of being an Olympian or Paralympian, given their circumstances. Later in my life I had an accident and that opened up the door for me to the Paralympics.

“I thought it would take longer than four years to get to the pinnacle of the sport. But somehow, with good coaching and a great set-up, I’ve managed it.”

Pritchard says he has many people to thank for his journey from reluctant rower, to gradual enthusiast, to world class Paralympian.

But among those he is most grateful towards is Andrew Williams, the president of City of Swansea Rowing Club.

It was Williams who sat down for a coffee with Pritchard, listened to his story and his new ambitions, and decided that the Swansea club would made whatever adaptations were required for their new recruit to reach his goal.

“Five years ago, I was lying in a hospital bed and now I’m getting ready to compete in Tokyo” – Ben Pritchard | Sport Wales
A well written article with ⁦@sportwales⁩ about ⁦@BenjaminPritch1⁩’s story so far! https://t.co/3nRX9Qas4l

They had some experience of disabled rowers using their stretch of the Rover Tawe, since James Roberts had been part of the club some years before.

“I’ve got a lot to thank Andrew for,” says Pritchard.

“He had that positive attitude of just giving it a go. It was such a help and he has gone on to become a big part of my rowing journey and more than that. He has become another father figure in my life.”

Pritchard made enough early progress for his talent to be recognised by British Rowing and he joined their development squad in 2017, less than a year after his accident.

Can you believe that after the past two years we are finally here and the games are about to begin!

Privileged to spend my first games with this amazing group of people. @ParalympicsGB | @paralympics | @tokyo2020 pic.twitter.com/bAjIj9Fbc9

The pandemic left him frustrated through 2020, before he was forced to overcome significant setbacks – an arm injury that required surgery, before he contracted Covid-19 last Christmas.

He recovered in time to go to this year’s European Championships where a silver medal showed he was back on track for Tokyo.

“I wasn’t sure whether I was ready for the Europeans but thankfully my coach Tom Dyson and British Rowing’s chief medical officer Ann Redgrave persuaded me to compete.

We wish Team GB the very best of luck at the Paralympics next week! We’ll be supporting you all, including Ben Pritchard – Para rower & Stiltz homelift owner.#Paralympics #homelift #TeamGB pic.twitter.com/Gv7sBZ0qhi

“That silver medal gave me a lot of belief, as well as some valuable racing experience. Covid lingered a bit in terms of fatigue but I’m feeling good on the water, and I’m really hoping I can push for a medal place out in Japan.

“I always feel anxious until I get to the competition. Look at Alun Wyn Jones and the Lions! Anything can happen.

“But I am also determined to enjoy the experience because I know it will be gone in the blink of an eye.”