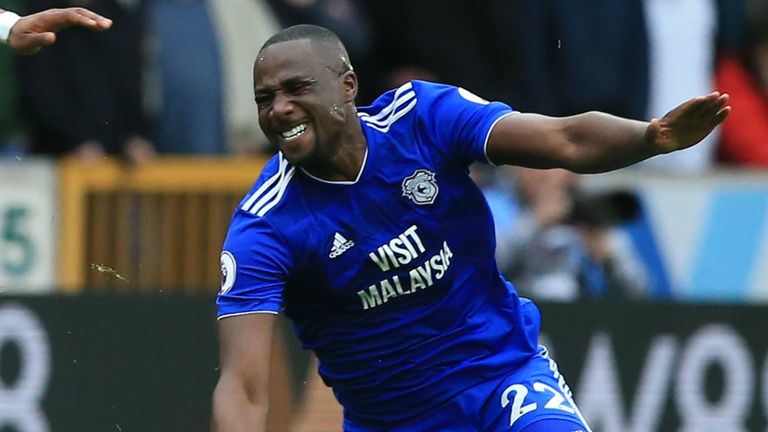 Cardiff City fans have reacted with anger and disappointment over the club’s decision to release Sol Bamba.

The defender – who announced last month that he is cancer free following his battle with Non-Hodgkin lymphoma – has been moved on along with Joe Bennett, Junior Hoilett and Euro 2020-bound Wales midfielder Jonny Williams at the end of their contracts.

Bamba, Bennett and Hoilett joined the Bluebirds in 2016 and made a combined total of 478 appearances.

A huge favourite with Cardiff supporters, Bamba made 118 appearances for the Bluebirds having arrived as a free agent in October 2016 under former manager Neil Warnock.

Really disappointed that Cardiff have cut Sol Bamba and Joe Bennett. I get people on here all the time saying that you can’t be sentimental. YES YOU CAN! Cardiff are pretty terrible at this sort of legacy stuff. I understand that money is tight, but guys, c’mon. Have a heart!

Williams, who signed from Charlton in February, and goalkeeper Joe Day are also leaving the club at the end of June.

A statement on Cardiff’s website read: “We would like to place on record our sincerest thanks and best wishes to Sol Bamba, Joe Bennett and Junior Hoilett who will be moving on this summer upon the expiration of their current deals.

Although expected, getting rid of Sol Bamba is just really bad PR. Modern football is brutal.

“The three players joined us in 2016 and would go on to become key figures in our 2017/18 promotion squad. Between them they made a total of 478 appearances across a five-year period, representing a significant contribution to the Club’s recent progress and history.

“Joe Day and Jonny Williams will also leave the Club with our best wishes at the end of June.

“Our departing Bluebirds will always be welcome here at Cardiff City Stadium and we wish them all the very best for the future.”

Bamba had been linked with a possible coaching role with the Bluebirds, but there is no mention of any further involvement with the club in the short four paragraph statement confirming the players who are leaving.

The 36-year-old made seven appearances for the club this season – six before his cancer diagnosis and then a brief substitute appearance late on in the final home match against Rotherham, following the Ivory Coast international’s successful treatment.

The decision to release him has led to a number of angry messages on social media, particularly from fans who wanted to see him given a coaching position.

Bennett had been in talks with the club over a new contract but the defender suffered a serious knee injury in March that ruled him out for the rest of the season.

He is currently undergoing re-habilitation in Portugal in a bid to get fit for next season, but the left back will not be resuming his career with Cardiff.

What the actual fuck. Point in Jonnyesta? And Sol Bamba. Wow. https://t.co/eyQIlKYFAe

The decision to release midfielder Williams has also raised eyebrows as manager Mick McCarthy suggested last month that the 27-year-old, who was signed in January on a short-term contract, would be remaining at the club.

Cardiff have so far made one new signing for next season – 30-year-old striker James Collins who has joined from Luton Town on a free transfer.