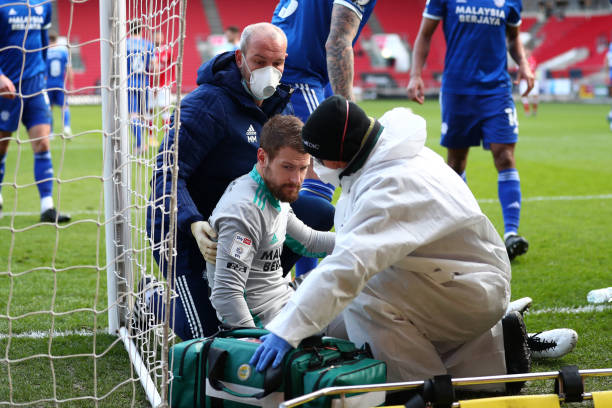 Alex Smithies will have to wait to get keeper's jersey back after his illness due to form of Dillon Phillipos. Pic: Dan Istitene/Getty Images

Mick McCarthy admitted he was baffled over a mystery illness to Alex Smithies as he marked his first win at Cardiff City boss with a 2-0 victory at Bristol City.

But goals from Curtis Nelson and Kieffer Moore – his 11th in the Championship this season – saw McCarthy claim his first win after two draws as City moved yp to 14th.

“I’ve just been in to see him with the physio. He’s sat up and we don’t know if he’s had an allergy or something,” said McCarthy of Smithies who was replaced by Dillon Phillips.

“I don’t think so. They all had the pre-match meal and it was all the same stuff. I doubt that very much.

“He looked very ill at the time. He was brought off on a stretcher. That looked worrying. But I’ve been to see him and he seems OK. So I’ve no idea. But he was quite ill at the time.

Nelson and Moore both struck from headers as City ended their longest run without a league win in five years – seven games – after clearly one of their best displays of a disappointing campaign.

Centre-back Nelson converted from from the recalled Harry Wilson’s free-kick before Moore again showed what a bargain buy he has been by heading home from Sheyi Ojo’s precise cross.

New signing Jonny Williams was ruled out of his debut by the injury he suffered in training as City inched up the table ahead of Tuesday’s trip to in-form Rotherham United.

“It’s a great feeling, not only to have my first victory in charge of Cardiff, but also my first win in the Championship since I was at Ipswich three years ago,” added McCarthy, who celebrates his 62nd birthday on Tuesday.

“The lads had to work really hard for it. If you get early goals it makes life easier, but we expected Bristol to respond in the second half and did really well to keep a clean sheet.

“I watched their game at Brentford in midweek and knew they were struggling for a left-sided defender.

“We felt we could hurt them down that side and both the goals came from crosses from our right.

“They were both well-taken. We could feel the bottom end of the table creeping up on us and hopefully this is a step towards sniffing the teams at the other end.”