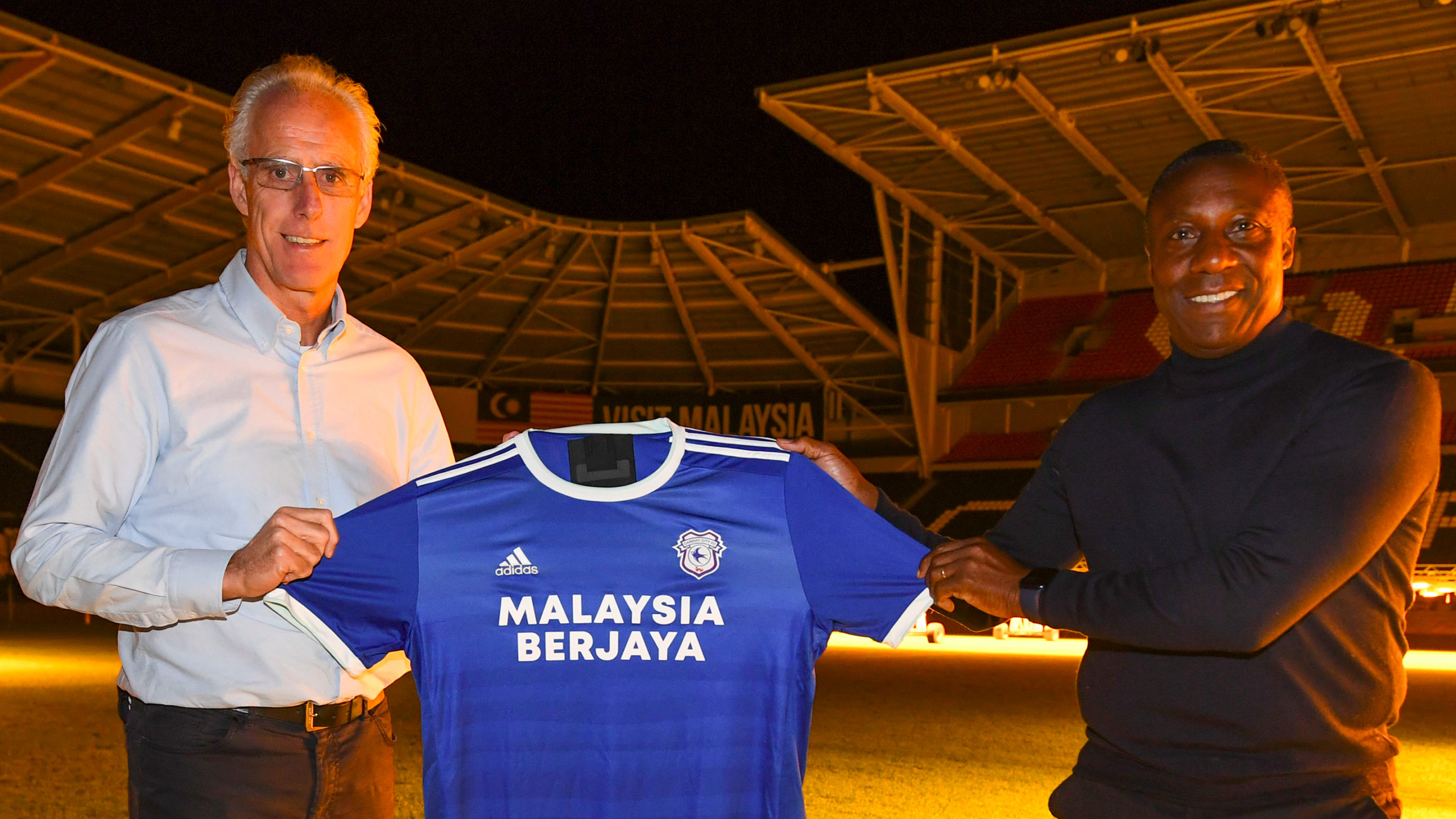 Mick McCarthy, with long-time assistant Terry Connor, have signed deal until end of season but aims to be around a lot longer. Pic: Cardiff City

Mick McCarthy insists he is happy to have signed a short-term deal to manage Cardiff City until the end of the season – but is aiming to be around a lot longer.

The much-travelled former Republic of Ireland boss has been installed as a quick replacement for the sacked Neil Harris.

McCarthy knows he was not the first choice for many of the Bluebirds faithful, but says he has no problem with that – and is looking to win the supporters over.

“I guess I have got to earn that long-term deal with my performance and the performance of the players,” said McCarthy, who believes he has inherited a talented squad having watched the Championship victory at Nottingham Forest earlier this season.

“Getting them to play and win games and seeing what we can do this season. If it is successful, yes, of course, there is an opportunity.

“My thinking is, I want to get back to work and I am delighted to be able to do that at a club as big and good as Cardiff City.

“Clubs are all suffering a little bit, managers leaving, coming in and signing two or three years, I am quite cool with it. If I earn a longer-term deal, good for me If I don’t then it’s my fault.

“The first thing I did when I got the call, that I could speak to the club, I looked at the squad and thought ‘Wow, they have got some good players.

“I watched them play at Nottingham Forest, I was really impressed, played really well and won the game. I am thinking ‘there is an opportunity here.”

McCarthy’s first game in charge will be the trip to home-town Barnsley on Wednesday when the club aims to end a run of six straight defeats which eventually cost Harris his job.

Of not being the fans’ first choice, he added: “Everybody is entitled to an opinion. If you ask every Cardiff supporter you would get a long list of people they would like to employ, a lot of people in front of me.

“I can’t do anything about that. I am not interested in that. I just want to come in, enjoy these 22 games and do as well as I possibly can. Then, hopefully, the ones who didn’t want me will be proven wrong.

“If you form a committee to design a horse you get a camel anyway, someone has got to make a decision.”

McCarthy will take a few days to assess the squad before deciding if he needs to talk to owner Vincent Tan about bringing in new players before the transfer deadline.

Hows everyone feeling today,mick will get my support now but im not happy,wheres the long term plan,whos going take over in summer,have they got someone in mind,is mick going sign players if he is then hopefully loans as new manager be left with warnock,harris and micks players ?

Right-back Perry Ng and striker Max Watters made their debuts in last week’s 1-0 home defeat by QPR having been signed by Harris.

And though McCarthy insists it is too early to talk about bidding for the play-offs – City are 13 points off sixth place and just nine points above the relegation zone – he is not ruling it out.

“I haven’t spoken to him about that,” said McCarthy about any new players. “It (his contract)  was only completed yesterday and I had my first training session this morning.

“I’ve got to see the players I’ve got, and we will discuss that when we have been in a few more days.

“The play-offs would be nice, wouldn’t it? I had a brief meeting because I wanted to see them train.

“I can learn more about them when we train and see where we are at. We will attempt to win the game against Barnsley on Wednesday night. When we start picking up points, we can set targets.

“To come in and say, on the back of the defeats we have had, that the target is now the play-offs, some of them will wonder if I’ve gone off my rocker.

“If we beat Barnsley, Millwall, maybe we can say it. But we need to get back to winning games.”

McCarthy, who will be joined by long-term assistant Terry Connor, has been a visitor to the Cardiff City Stadium many times before at club and international level.

But the 61-year-old – who has also managed the likes of Ipswich, Sunderland and Wolves – admits he was blown away by the ground and the training facilities at Hensol.

“I have to say I’ve been knocked out. I have been in the stadium, but usually, I go in and take no notice of it. But what an amazing ground it is and the training ground.

“Nobody has once said to me, ‘Wow, you should see Cardiff’s ground and training ground’. I have been knocked out by it, it’s amazing! It’s brilliant, I am really delighted.

“I can place myself anywhere, I have done over time. I come from Barnsley, but I have been at Millwall in south east London, I managed in Ireland, Sunderland, Wolves, Ipswich and I’ve managed to be able to settle and manage and have a fair bit of success wherever I’ve been.

“I’m hoping that’s going to the case in Cardiff.

“I am all right with funny bunches, because I come from a funny bunch myself.”

McCarthy was axed earlier this month by Cypriot side APOEL after just two months in charge following a run of poor results.

“It didn’t work out. Whether that’s me or not, I can run through a litany of excuses. We had 19 players who had Covid-19 from December 8.

“We came back and lost all three games. Whether that’s Covid or me and TC, it didn’t work.

“So, it’s the first time ever that has happened, and I was disappointed it happened that way, but I am looking forward to this challenge.”

3 thoughts on “I Plan On Being Here Longer Than A Few Months, Mick McCarthy Tells Cardiff City Fans…Whether They Like It Or Not”