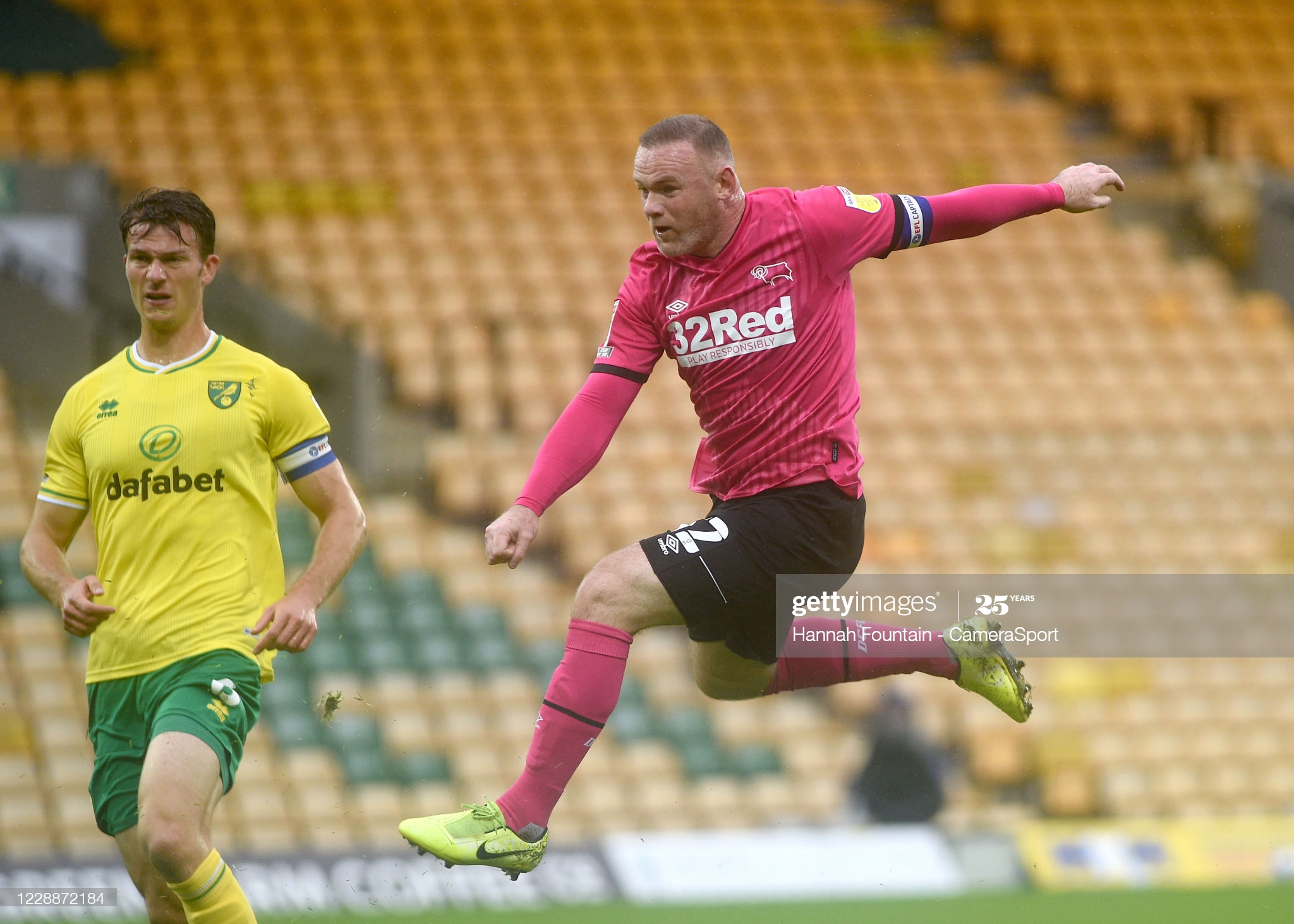 Wayne Rooney will miss his third and final game after self-isolating after a friend tested positive for coronavirus. Pic: Hannah Fountain - CameraSport via Getty Images

Neil Harris says Cardiff City will face a different Derby team to the one they beat a few months ago – and not just because Wayne Rooney is missing.

When the sides faced each other last July both were challenging for the top six, but it was the Bluebirds who came out on top 2-1 to reach the play-offs as the Rams missed out.

City travel to Pride Park Stadium on Wednesday with both teams not having the start that they would have wanted to the Championship.

But Derby will be without club captain and England’s record goalscorer Rooney as he is self-isolating after being within contact of a friend who tested positive for coronavirus.

“Wayne obviously is a top player in world football and the championship and a huge personality in the group,” said Harris.

“I’m sure it will be a loss to any team. Whatever team Derby put out is going to be a good side.

“We won’t see a Derby team that plays similar to what they did a few months ago when they came to the Cardiff City Stadium.

“They are a team that’s finding their way a little bit at the moment. They’ve got good players, important players back into the group.

“It will be a completely different game from the other evening and we have to make sure that we handle the game in a different way.

“You have to have great shape, good pressing triggers and have to be well organised against a Derby County side.”

But Harris insisted: “If we take our chances the other night, we win that game by five. That was my disappointment after the game.”

“The results show we have been better away, I think results in general across the football league. Teams have won more away games than home games,” said Harris.

“I don’t expect that to change while there’s no fans, it’s a completely level playing field.

“In some ways mentally it’s better to be away from home because you normally expect the worst. When you go away from home you expect an onslaught of abuse from the fans.”

Wednesday night’s game will also see Harry Wilson return to his former club after a successful loan spell at the Rams back in the 2018/19 season when the Wales international scored 15 goals.

Harris added: “I think he had a great loan spell where he scored a lot of goals for Derby a couple of years ago.

“I think also during his loan spell last season (at Bournemouth) where he scored eight or nine goals in the Premier League.

“He creates chances, great free-kick deliveries, great corners, gets lots of shots off and he’s a handful to play against.

“I enjoy seeing him every day in training and he’s a real breath of fresh air within the group as well, personality-wise and will just go from strength to strength.”

City are hopeful that right back Jordi Osei-Tutu will be fit for the upcoming game as the Liverpool loanee was substituted off with an injury against Middlesbrough.

“It’s been a little stop start for him with that we have to make a decision whether he will be included at Derby,” added Harris. “We’ll see how he goes today and make the decision of whether he travels to Derby or not.”

City could also see the return of left-back Joe Bennett despite the impressive display from youngster Joel Bagan who stepped up to replace Bennett and other injured left-back Greg Cunningham.

“There’s a chance, Joe’s another one that needs to get on the training pitch.

“In his absence, I thought Joel was excellent and he just goes from strength to strength with the more minutes he plays on the pitch, but I’m certainly hopeful of having Joe back in the group.

“It’s another hamstring where you have to be careful, but you also want important players as well. We’ll see how he goes (in training) and make the decisions whether he travels also.”

More positive injury news for the Bluebirds is that fan favourite Lee Tomlin could return to action this week.

Transfer deadline day signing Filip Benkovic, who’s yet to make his debut, will not feature against Derby but will play for the under 23s to get his match fitness up and running.

“Filip trained with us Saturday morning and he’ll play in the under 23 to get minutes.

“He had a good loan spell with Bristol City after lockdown where he played some games. Over the course of pre-season, he played 28 minutes and 45 minutes for Leicester City so he’s short of match minutes.”