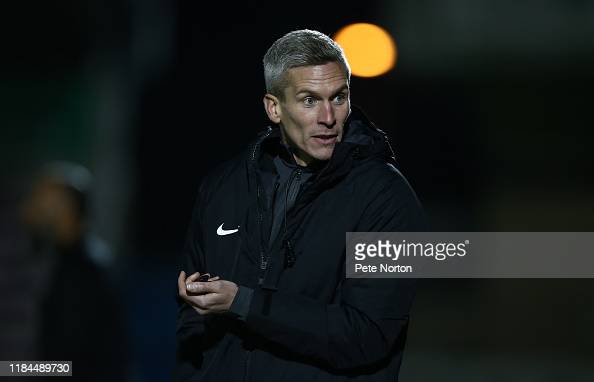 Steve Morison claims he hadn’t even been in the manager’s office at Cardiff City before he was handed the interim reigns for the next three games last weekend.

Now the Bluebirds Under 23 coach has the job of trying to stop the rot at the Welsh capital club after eight successive league defeats – starting at Stoke on Saturday.

Mick McCarthy lost his job after the 2-0 home defeat to Middlesbrough on Saturday and chairman Mehmet Dalman invited the former Wales and Millwall striker Morison to step into the breach for the next three games.

“It’s a new, exciting and different challenge. I was there watching the game on Saturday and then left the ground having been given the role of trying to help the first-team pickup results over the next three games,” explained Morison.

“Saturday was the first I’d heard about it from the club and this week is the first time I’ve been in the manager’s office!

“I never planned that far ahead in my playing career. I was just prepared to go to the next level if needed.

“We’re in a battle, a relegation battle at the minute, and we need to get out of it. I’ve got to try and pick up some results and my immediate remit is to prepare for the game against Stoke.”

It was business as usual for Morison at the club on Monday as he took training with the U23s ahead of their game at Ipswich on Tuesday. They won 2-1 to extend their unbeaten record to seven games to remain three points clear at the top of their division.

Morison has done a great job in bringing players through from the re-vamped U23 programme into the first team. Mark Harris and Rubin Colwill have both gone on to play for Wales as well as the first-team and a handful of others have also played in the Championship.

“I had a huge job turning around the fortunes of the U23s, changing the mindset of the club and academy and that’s what I’ve been working towards. I’ve made massive strides there, but I’m not getting carried away,” added Morison.

“The difference is that you’ve got one team that’s lost eight on the bounce and one that’s won seven on the bounce. The first team are just searching for that bit of form we all know they are capable of producing – it’s just a case of getting them to do it.”

Having seen managers come and go during his career at Norwich, Leeds and Millwall, the 20-times capped Welsh international striker knows how the City players will be feeling.

“I’ve been in many dressing rooms when managers have been sacked. Not a lot changes, it’s just putting a smile on their faces and getting them working,” he said.

“The pressure is all on me, people are looking at me. I know people are asking ‘can he do it?’ The players will just carry the plan we put in place and if it doesn’t go right it’s my responsibility.

“This is huge for me – I’m working at the biggest club in Wales – and it’s going to be really nice having that feeling. The only thing is that I can’t do anything about it once the players step over that white line.”

🗣 “Hopefully we can start something over this next week, get a little bit of a run going and that will make the two home games really, really exciting.”#CityAsOne

Chris Wilder, Frank Lampard, Alan Pardew, Michael Flynn and even current Wales boss Rob Page are all in the bookies odds to take over from McCarthy at Cardiff City Stadium in the long-run, but Morison is the man with the chance to make an immediate impact.

“I’m in the betting because I’m here now. If I win three out of three then I’m going to be higher in the betting, but I’m honestly not worried about it one little bit,” he added.

“I’m not interested in what people might say. I’m focussed on getting a result on the weekend – we can’t go nine for nine.”

The weight of recent results will present its own mental barriers to overcome, but there are a few physical problems that Morison will encounter when it comes to picking his first team.

“We are low on numbers, but that’s life. Tom Sang is not available; James Collins and Sam Bowen possibly not and Marlon pack is suspended,” said Morison.

“Leo Bacuna and Joe Ralls are possible for the weekend. Whoever plays at Stoke, we need to tell them what we want, not give them too much ‘out there’ stuff that’s been miles away from what they’ve been doing.

“The players will play a way that will suit them – I won’t be ripping up the playbook. We’ve scored one in eight, so we need to attack more. We also need to make sure the ball doesn’t go in the back of our net as well.

“Ultimately, the new manager only ever comes in when the club is in a bad position, on a down. You walk in, a couple of new ideas, training changes a bit and human nature takes over a bit.

“As a person, you feel like you’ve got something to prove. Sometimes something needs to change to get you out of that and often it’s a new manager.

“Style is a rather horrible thing to talk about. When you’re winning games no one cares, it only becomes a massive conversation when you’re not winning games.

“There is a real mixture of young and old within the group. Let’s get the best out of them, to help them become the best they can be.

“That’s my plan. If it works, great, but if it doesn’t at least I did it in the way I thought was best for the players.”