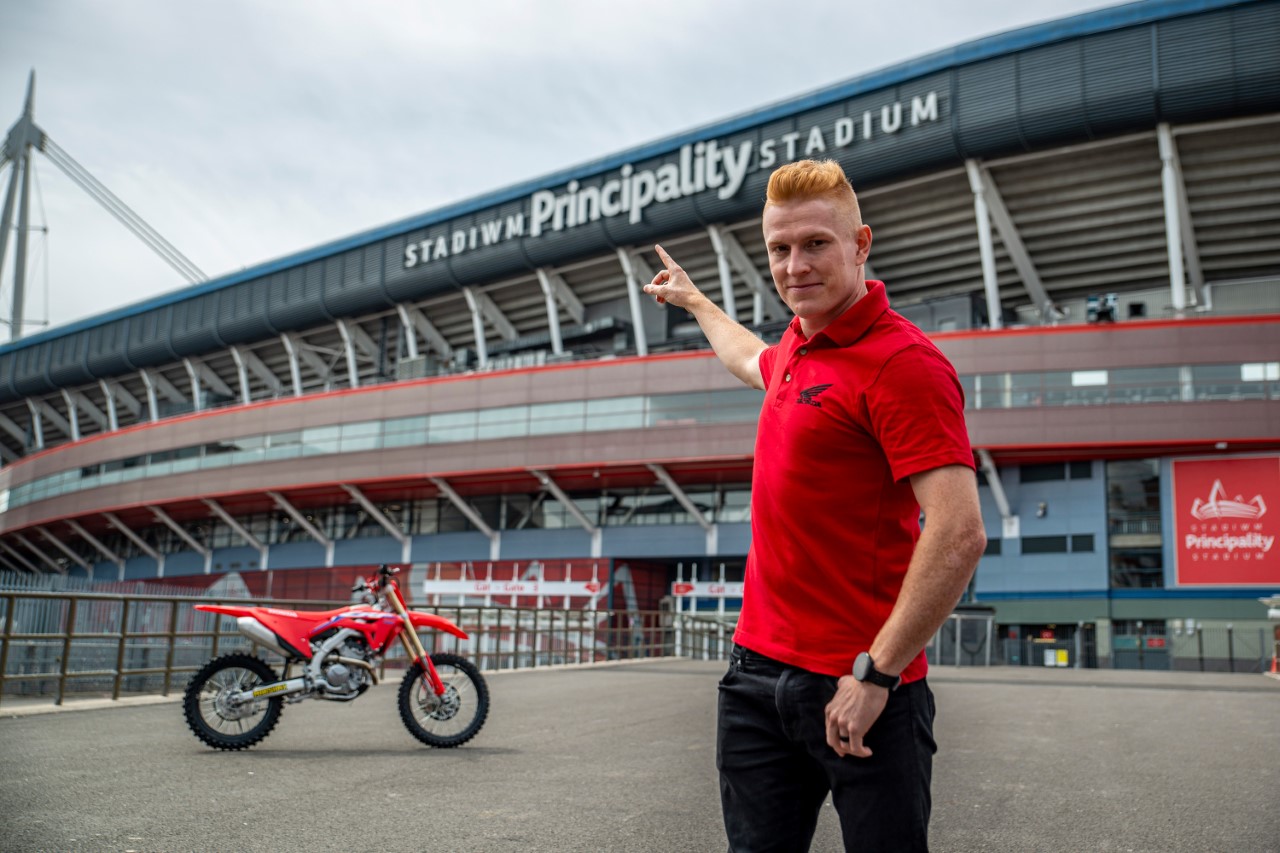 Max Anstie outside the Principality Stadium.

Wales has been selected to host the first FIM World Supercross Championship (WSX) event, which will see some of the globe’s best off-road motorcycle racers compete at the Principality Stadium on Saturday October 8.

The Australian-based WSX promoter, SX Global, has chosen the Cardiff venue for round one of the inaugural WSX series, ensuring that the famous Principality Stadium will go down in supercross history.

The ultimate dirt battlefield will see 10 teams and 40 of the world’s best riders compete for the £200,000 cash prize fund and international supremacy over a specially constructed rollercoaster course on the floor of the Principality Stadium.

Also in the starting line-up will be Max Anstie. He last raced at the Principality Stadium when he was nine-year’s old, and recently revisited the venue.

“I was last here as a kid on a 65cc ‘bike, so to come back here competing for a World Championship title is super special.

“When the first round was announced, my mother immediately phoned me from her home in Wales telling me how excited she was and that enthusiasm is really spreading.

“I’ve had so many friends and fans contact me to say they’re coming. It’s going to be mega. This is such a big thing.

“The Championship is full of talent, which genuinely makes it hard for me to pick out a rival I expect to be battling with in Cardiff.

“What I do know is that this is a World Championship and nobody will be here to make up the numbers. Competition will be fierce, and I need to be on my game.

“I’m training harder than ever, and I’ll be back in Florida getting as much time on the ‘bike as I can before we come back in October.

“I genuinely cannot wait for the gate to drop on 8th October.”

Fans are in for a loud action-packed night, with freestyle motocross stunts, pyrotechnics and live music.

Fédération Internationale de Motocyclisme (FIM), reaffirms that the FIM World Supercross Championship remains the only supercross world championship series that is recognised and sanctioned by the FIM. https://t.co/vpVzUduFaV pic.twitter.com/K75o4KhMCl

Following the release of his critically acclaimed second album ‘Flu Game’ and his celebrated headline festival tour, AJ Tracey will play the Principality Stadium for the first time.

Cardiff beat off competition from around the world to host the first WSX event – including Melbourne, which will host round two on Saturday 22 October at the Marvel Stadium.

“As hosts of the first round of the WSX, we look forward to delivering an outstanding experience for all supercross fans travelling to Cardiff and adding this to our successful 20-year history with motorsports.”

“The British Grand Prix in Cardiff represents a ground-breaking moment in supercross history, as well as the shared vision, passion and hard work of our SX Global team to elevate supercross on a truly global level,” adds Tony Cochrane, president, SX Global.

“We believe the demand for supercross around the world can sustain this sport year-round, and the FIM World Supercross Championship will be the platform that achieves this.

“The British Grand Prix and 2022 pilot season are merely the beginning, and there’s much work to be done. But we could not be prouder to begin this incredible journey to expand the global relevance of this great sport.”

Tickets for the World Supercross Championship at the Principality Stadium on Saturday 8 October are on sale now and available from LiveNation.co.uk / ticketmaster.co.uk.