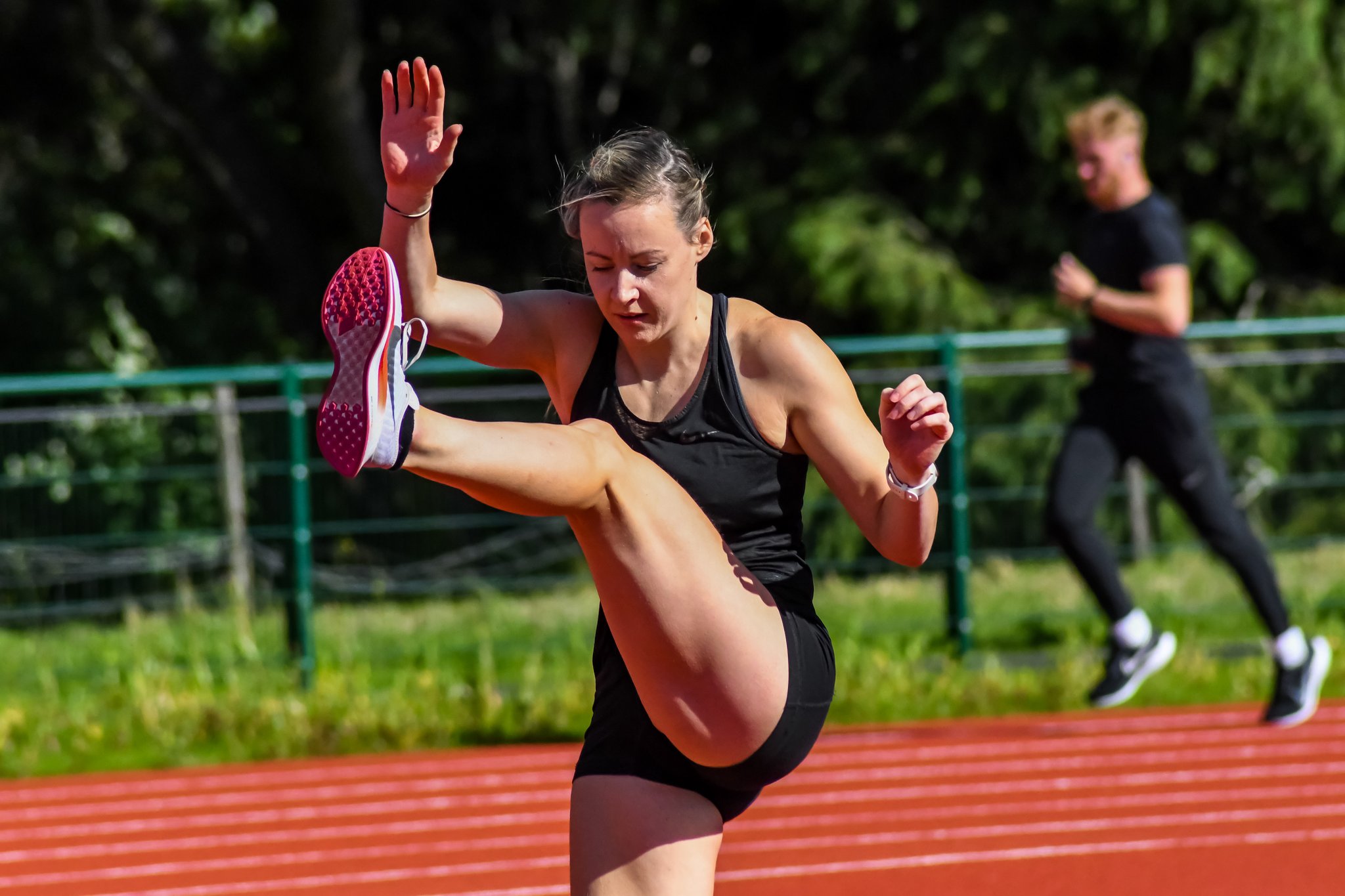 After serious illness, Caryl Granville is back on track. Pic: Rhys Jones.

It’s been a tough road back for Caryl Granville, but the Welsh hurdler has finally overcome an obstacle that threatened her athletics career. Now, she has two big targets to aim for over the next year as she tells Owen Morgan.

The Swansea Harrier was in agony after being diagnosed with several deep vein thrombosis in her leg and could barely walk, let alone run.

Today, she will line-up against the cream of British 400m hurdling at a meeting in Nuneaton.

Next weekend, she will pull on the red vest of Wales again – another tentative step towards achieving her ambitions of representing her country at her second Commonwealth Games in Birmingham and breaking the Welsh 400m hurdles record.

It is a remarkable comeback by any standard, but not entirely surprising for an athlete who has fought back from numerous injury setbacks.

Granville is typically laid back when she discusses her inclusion in the Welsh team for the Loughborough International on May 23 – less than a year after illness struck.

“Because life has been back to normal really, since about November, I’ve kind of just taken it for granted,” says the former Welsh champion.

“But, you know, your goals change as you get, fitter and healthier. So now it’s just step one on the way to what I want to achieve in the next year or so. So, chuffed, but one step of the plan, basically.”

The plan is to qualify for the Commonwealth Games in Birmingham and to break the Welsh 400m hurdles record.

But last July that plan seemed to be in tatters when a sudden huge swelling and agonising pain in her leg was diagnosed as DVTs.

The condition, which sees clots forming in veins, can be potentially life threatening if the clots break free and travel through the bloodstream and become lodged in the blood vessels of the lung.

Granville was put on medication and told by her consultant she could not exercise at all for at least six weeks and possibly longer depending on the seriousness and cause of the clots.

At the time, Granville told Dai Sport: “I don’t know how close it was to being way worse.

As it was, Granville was left with what she described as a “horrific limp” and wasn’t able to walk more than 10 metres before having to sit down.

But now, she is back, having run two comeback races already this month and looking forward to the on-track challenges ahead.

Talking about her recovery, she says, “It was a six week exercise ban after it all happened.

Exclusive: Caryl Determined To Overcome Biggest Hurdle Of Her Life With Two Important Dates On Horizon In 2021

“Then I saw the consultant again and I was on these heparin injections in my stomach. And then I moved on to an anti-coagulant.

“It was only in November that I found out that I had Factor V Leiden, which is a genetic mutation, which means I’m more at risk of developing clots.

“I think it’s like 20 cent more risk or something like that. And so that’s where it came from. So yeah, I’ve got dodgy genes!”

Finding out the cause of the clots was in some ways a relief, says Granville.

“It was just that it was so out of the blue, I didn’t know there was anything wrong at all.

“It was nice to have the explanation. Then I was deemed so low risk that I was allowed to come off on my medication and just be careful and be cautious with travelling on long flights and make sure I’m hydrated enough and stuff like that.”

Asked whether there were times she feared she wouldn’t be able to compete again, she says: “Yes. I didn’t know if it was going be a long term issue.

“Because you read online, or you get told by the consultant that 30 per cent of people have post-thrombotic syndrome afterwards, where they feel pain and they have swelling in their leg, post-clot.

“My clot was all the way at the top my leg and all the way down. So it was bad as it could get.

“That was just on my mind, thinking: ‘I haven’t achieved what I wanted to achieve in athletics, and now it could potentially be taken away from me.’

“So, it’s been great being able to just run again. It’s been really enjoyable.

“Even when lockdown was on, when I was running on the road, I was still just really thankful that I was able to do it and I didn’t have any issues with my leg. So, yeah, there were plenty of dark times when it first happened.”

Since those dark days she has gone from strength to strength, culminating in two comeback races over 400m hurdles and one over 100m hurdles earlier this month.

Although Granville wasn’t entirely happy with how they went, despite all she has been through.

“Then I raced on Wednesday, completely different tactics went off too slow but ran a solid time – 58 dead, which is okay,” she says with a hint of disappointment in her voice.

But then she adds: “When I look back – 58 – if you told me in August of last year that on my first race back, I would run that, I’d be pretty chuffed. It’s just me being an athlete!

DVT 9 months ago – Shape of my life today
We go again 🙌🏼 pic.twitter.com/898xjxtRQz

“This coming Sunday, there’s quite a big race. The entries are everyone in the UK – the top four hurdlers, every single person is going to be there. So Jesse Knight, Lina Nielsen, Meghan Beesley, Jess Turner.

“In the last six weeks or so I’ve had a few niggles, I had a hamstring niggle, so I had to have two weeks off and I’ve got an Achilles niggle, I’m keeping an eye on.

“So I just wanted to get races under my belt before this one on Sunday, just to get rid of the pre-race nerves, rust and everything like that.”

Then, the following weekend it will be a return to the Welsh vest that means so much.

A serious foot injury not only robbed her of a place on the Welsh team at the 2014 Glasgow Commonwealth Games but also two years of training.

Jaw surgery in 2016 threatened to jeopardise a place at the 2018 Commonwealth Games, but she managed to battle back in time to book her ticket for the trip Down Under to the Gold Coast.

And now she wants further opportunities to represent her country, especially at the Commonwealth Games in Birmingham.

The Loughborough International is the next step on that journey – albeit on a track which has mixed memories for Granville.

“Loughborough is the place where I got badly injured before the Glasgow Commonwealth Games,” she says.

“So, it’s a place I kind of dislike but it’s also the place where I went back and I ran a massive PB and managed to go to the next Commonwealth Games.

“It’s kind of like going full circle. I’m hoping to have more good memories this time and try and forget about the terrible ones in the past.

“It’s really exciting. I hope I can do myself justice and do Wales proud that weekend.

“Hopefully I can do a really decent time this weekend and that will give me confidence at Loughborough the following weekend.

“I just want to go for it and try and get as many points for Wales as possible, really.

“Then I want to run the Commonwealth Games standard as many times as possible this season to guarantee that I’m on that selection when it comes around next year.

“You know, that’s a big target! So yeah, running the Commonwealth Games standard and the Welsh record, hopefully, we’ll see.”

I don’t mean to brag…
(I definitely do)

His other patients are probably 60+, so the bar was low, but I need this victory right now 🙌🏼 https://t.co/3p1DkzuaBq

Like so many other Welsh athletes, Granville is particularly keen to make it to what will essentially be a home games.

“That’s the ultimate goal. The times I’m doing in training, I’m in the best shape I’ve ever been.

“It’s just transforming that into a race and, you know, trying to prove my point. And do myself justice.

“Fingers crossed it all goes to plan and nothing else happens to me in the next few weeks. I’d love to be on the starting line in Birmingham next year.

“The Gold Coast was amazing because it’s an amazing place and it was my first Games and everything, but while my parents and my fiancé came out, my sister would have loved to have come out too and my brother, who also runs.

“So, it would be more of an occasion and a sense of achievement to have all my family there and my friends and stuff.

“Fingers crossed, it goes to plan for me.”