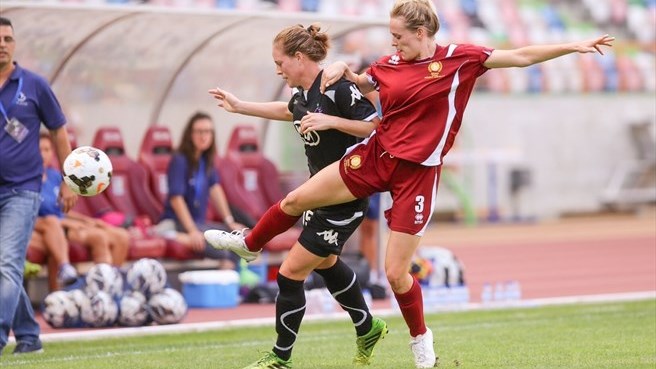 Over 50 athletes at the Commonwealth Games, a record–breaking Winter Olympian, a constant flow of former students representing Wales in rugby and football – and England in cricket and basketball  – and two teams on the verge of Europe…

Is Cardiff Met University the most important sports organisation in Wales?

This weekend, Cardiff Met FC have a European play-off final against Cefn Druids. Win, and they qualify for European football this summer.

They are already back-to-back British University Champions, the best in class, so to speak. If they make it through to the Europa Cup preliminary rounds, they will become only the second university side ever to play in the top flight of European football competition.

Unbelievably, by Sunday night, Cardiff Met University could have an unprecedented two football teams heading into Europe; a testament to the impressive football programmes led by the respective directors of football, Dr Christian Edwards and Dr Kerry Harris, but also indicative of the high performance environment that has been created at the University. And how many teams in Europe this season will be led by doctors?

Last year, The Guardian dubbed Cardiff Met FC the world’s most intelligent football team because of the amount of PHD students in their starting line-up. The European play-off final, live on S4C, could be their toughest test yet.

When Warren Gatland named his first British and Irish Lions team last summer he made Cardiff Met alumnae Ken Owens the captain for the very first match of the tour.

When Gatland picked his Wales squad for the autumn International series he surprised everyone by naming a young sevens specialist, Sam Cross, in the forwards. Cross was a star at Cardiff Met from 2011-2014, before going on the win the DHL Impact Player of the Season award in the 2017 World 7s Series.

This week, Gatland called up a relatively unknown player to his squad for the summer tour to the USA and Argentina. His name is Aaron Wainwright.

If you don’t know much about him, Wainwright graduated from Cardiff Met less than 12 months ago, an excellent student and an integral member of the Cardiff Met RFC side over the last few seasons.

Geraint John, WRU head of rugby performance, is another former Cardiff Met boy. The production line at Cyncoed (Cardiff Met’s sports campus) goes back as far as Gareth Edwards and JJ Williams, and more recently the 7s and 15s wingers Alex Cuthbert, and in the women’s game, Olympic speedster Jaz Joyce, who is currently studying sport and exercise science as well as lighting up the World 7s Series on weekends.

But it’s not just football and rugby where this university excels, the cricket set-up isn’t bad either.

When the Cardiff MCCU team (a combination of Cardiff Uni, University of South Wales, and Met cricketers) won the MCCU title at Lord’s last season, 10 of the starting 11 were Cardiff Met students.

The list goes on and on. First class students, first class athletes. The university is rewriting the textbook in how to create and develop elite student athletes, how to create an environment in which students can thrive both academically and athletically.

But to really understand how seriously sport is taken at Cardiff Met it helps to go back to a cold Friday morning in February.

Picture the scene. There’s a meeting about to begin in Room C024 on the Cyncoed Campus at Cardiff Metropolitan University. It’s for students who will be going to the Commonwealth Games and might require extensions in their coursework and assistance fitting academic deadlines around their training schedule.

Yes, that’s right, there were so many students heading to the Gold Coast that the University needed to hold a meeting. Cardiff Met supplied Team Wales with 25% of its athletes.

In total, the university sent 50 athletes and coaches to the Gold Coast; a few Cardiff Met basketball players (Stef Collins and Ellidih Simpson) representing England, a swimmer (Josh Yon) from St Helena, an athlete for Malta (Charlotte Wingfield) a badminton player (Chloe Le Tissier) from Guernsey, and yes she is related to football legend Matt. He’s her uncle.

When they named the Wales netball squad for the Games, eight of the 12 were former Cardiff Met Students. The team’s performance analyst was from Cardiff Met, too.

The captain – Suzy Drane – is Cardiff Met through and through, once a student, now a senior lecturer at Cyncoed.

Another of the stand-out performers for Wales Netball, Nia Jones, is not only ex-Cardiff Met, she still coaches the university’s netball first team. Nia has also played international football for Wales.

The captain of the Wales hockey squad, Luke Hawker, when he is not carrying a stick and leading the nation, is a Cardiff Met lecturer (and former student). Hawker scored in Wales’ thrilling 3-2 defeat to England in the group stages of the Games, a game which Wales led 2-1 at one stage. He was one of eight Cardiff Met past or present players in the squad.

Wales’ women had their own Gold Coast thriller beating India 3-2, the winning goalscorer that day was… you guessed it, a former Cardiff Met student, Natasha Marke-Jones.

Boxer Rosie Eccles is studying a masters in sports psychology at Cardiff Met. She has a dissertation to complete before the year is out, but that didn’t stop her winning a silver medal out in Australia.

Rosie’s not happy with the medal, though. She wanted gold, and will be using every element of her psychology degree to give her the edge come the Olympics in 2020.

In track and field, the Met continues to flex its fast twitch muscles. Hardly surprising, since this is the university which gave us Olympic Gold medallist Lynn “the Leap” Davies and Paralympic juggernaut Aled Sion Davies.

Met’s director of athletics ,James Thie, has been to four Commonwealth Games, as an athlete and a coach, so it wasn’t surprising to see so many Met athletes, past and present, in action on the tracks and fields of the Commonwealth Games.

On February 21, a Team GB bobsleigh hurtled down the course in Pyeongchang during the Winter Olympics.

When it came to a halt, two athletes stepped out wearing helmets. They had just recorded Britain’s best ever Olympic bobsleigh finish. One of those athletes was Mica Moore, a former student at Cardiff Met.

Her story is so typical of Cardiff Met students. A story of ultra dedication and hard work. While she was at Cardiff Met, she represented Wales in the 2014 Commonwealth Games as a sprint relay runner. Four years later and she is a Winter Olympian.

There is a culture of sporting excellence at Cardiff Met going back decades. High performance is part of the DNA. You only have to look out of the window on a freezing January morning to see athletes on the track, sweeping snow away so they can train.

Or in the summer months, out of term time, when the rugby, football, basketball and hockey teams re-group in August for six weeks of gruelling pre-season preparation.

Or in the weights room every morning, where rowers, runners and riders push themselves towards personal bests.

Some disclosure  – I work at Cardiff Met, so I get to see the hard work every day, but I’m not sure if the rest of Wales is aware that the very engine room of Welsh sport  – the beating heart and the bulging muscles of so many of our national sports teams  – is right here, sweating it out on the pitches and tracks and courts, of a small campus, tucked away, up above Roath Lake in a residential area of Cardiff.

Joe Towns is a freelance television producer and journalist and is the Programme Director for the Sport Broadcast MSc at the Cardiff Met School of Sport and Health Sciences.