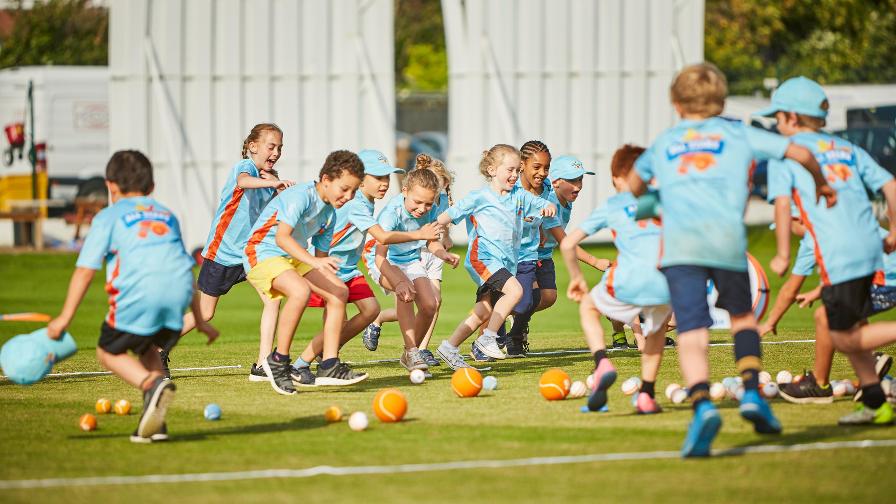 All Stars cricket gives youngsters their first taste of the game. Pic: ECB.

The school summer holidays are beckoning, the Euros are over, so what better time for cricket to stride out into the middle and take centre stage? At the elite end, Welsh Fire are about to ignite The Hundred, while down at grass roots level opportunities to start playing the game have never looked more appealing, as Graham Thomas reports.

Former England captain Alastair Cook believes this will be the summer of love when it comes to children and cricket.

All across the UK, activities are opening up for youngsters to play the game and develop their skills in a sport forced to mostly slumber through 2020 in the early months of lockdown.

But with Covid restrictions now eased, especially for under-18s, cricket is looking to make up for lost time with programmes across the country aimed at unlocking the thrill of bat and ball.

In Wales, 4,000 children are already being introduced to the game this summer through All Stars, the scheme aimed at fun for five to eight-year-olds. A further 2,000 are building on core skills through Dynamos, the programme for eight to 11-year-olds that had to be shelved last summer.

“This summer is a fantastic opportunity for the sport to enable children to experience the thrill and the fun of playing cricket,” says Cook, who took part in National Cricket Week in June.

“Ove the years, Chance to Shine has been a fantastic charity in getting cricket back into state schools and giving kids the opportunity to experience cricket.

“Now, there are other programmes going on to get kids into cricket, or re-introduce them to it after all the Covid problems. They’re learning togetherness and they’re learning to fall in love with cricket.”

In All Stars, every child who registers gets a backpack, cricket bat and ball as well as well as a personalised T-shirt.

The older Dynamos get in on the same action with T-shirts, but they also get involved with matches as well as skills and they can engage with an app linked to their sessions.

Volunteers – known as activators – are now running All Stars and Dynamos sessions at cricket venues across Wales, mostly in midweek in the early evenings.

At Pontardawe Cricket Club in the Swansea Valley, they are running both schemes with 14 youngsters taking part in All Stars and 27 more in Dynamos.

Both girls and boys are involved in both groups, with girls making up slightly less than half the total numbers.

Not only do the programmes help introduce cricket to the next generation, but like other clubs, Pontardawe are using the influx of potential new members as an opportunity to re-energise their club with new faces and their family members.

Club chairman Rob Pick says: “Pontardawe have fallen down the leagues in recent years and we’d like to build up again. This has given us some impetus to that aim.

“We want to enter the junior league next season, so this has been a big driver for that aim.

“We started All-Stars the year before Covid hit and that was a brilliant first year. The youngsters really enjoyed it.

“Last year was wiped out, but we’ve come back again this year and it’s been really good. Both children and parents have been really enthusiastic. Everyone has got used to the Covid routines and you don’t really notice it after a while.”

Pontardawe run one session every Wednesday evening between 6pm and 7pm, involving one group of All Stars and another of Dynamos.

The hope is that the five-year-old swinging a bat for a first time this summer, or the 11-year-old knocking out middle stump with a yorker, could be doing the same for junior or senior teams in men’s and women’s cricket in the future.

“It’s a pathway to building the club up,” adds Rob. “Our junior section fell by the wayside.

“This is all about children having fun and enjoying themselves. Then, as they get older, they will be coached in more technique.

❤️ this picture so much.
And the sentiments.
This is girls’ cricket in South Wales. Thank you to all the volunteers making this happen across the land.
– And, most importantly, keep smashing it, girls!! 👊🏼#WeAreWelshCricket 🏴󠁧󠁢󠁷󠁬󠁳󠁿🏏 https://t.co/YxrNJJ0GoB

“We run a first and second team, with an occasional third team who play friendlies. We want to start a junior team in the league and we have some funding for that. That’s the plan.

“The club is on the up. It should be a great summer of cricket.”

Across on the west Wales coast at Aberaeron, there are even more impressive numbers of youngsters putting bat to ball.

Aberaeron Cricket Club currently has 26 All Stars and 36 Dynamos, with around 10 girls in each group.

“I think it’s got around by word of mouth and parents have been really keen to get their children signed up.

“The great thing about All Stars is that you are getting children interested in cricket from a very early age – as young as four or five. We are nabbing them early.

“It can be like herding cats, but we are giving them a love of the game. The interest has been huge and we’re almost having to turn people away.”

Jenny is helped by fellow activator Arif Saad, who takes charge of the Dynamos, while her son Jacob Jenkinson is the club’s U13s coach.

Like Pontardawe, the club believe the influx of new blood can re-invigorate the club in an area where outlets for children are not always plentiful.

“This isn’t an economically deprived area, but it can be socially deprived in that there’s sometimes not much to do,” adds Jenny.

“The kids who did All Stars were super-excited to come back and do Dynamos.

“But if you put all the effort into running All Stars, then you run Dynamos, but don’t run junior sessions, then you’re missing a trick. My son is helping coach the U13s team and they went from four players in the first week this summer to 15 in the second.

“That shows the interest in the sport, but clubs need to make sure the children have that opportunity to keep playing in junior teams once they are too old for these programmes.”

The school holidays are almost here. Let the summer of love for cricket turn up the heat.