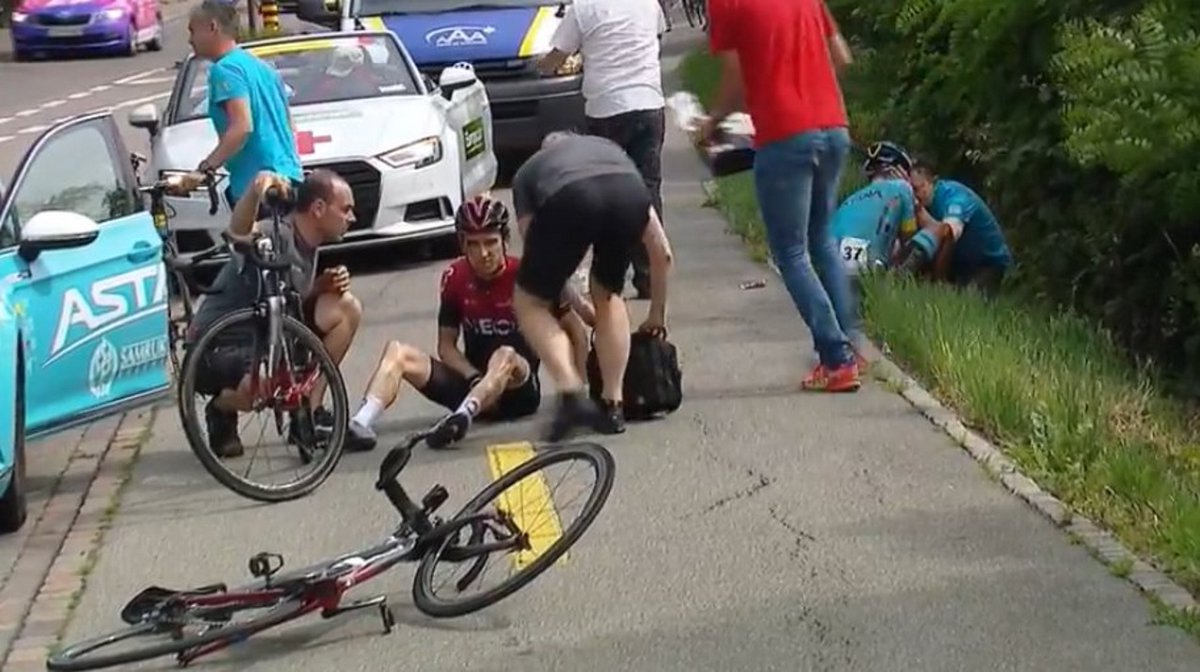 Geraint Thomas receives treatment on the road after his crash.

Geraint Thomas has been given the all-clear after crashing out of the Tour de Suisse.

Wales’ reigning Tour de France champ was taken to hospital after the crash on stage four of the race.

But fears that he would not be on the start-line for the Tour in Brussels on July 6th were ended after he escaped relatively unscathed.

The Team INEOS rider suffered abrasions on his shoulder and a cut above his right eye but has not sustained any further injuries.

The 33-year-old said of his crash: “There was a lip in the road that came out of nowhere.

“An Astana rider hit the lip and crashed and I had nowhere to go. I landed on my shoulder and my face and there was quite a bit of blood.

“You’ve always got to be cautious with a head injury, and whilst I was keen to carry on, the doctors made the right decision to pull me out of the race.”

Thomas ’ involvement in the Tour de France isn’t likely to be affected by the crash just days after team-mate Chris Froome suffered serious injuries in a crash in France.

And the Cardiff-born rider is already looking forward to being on the start line in Belgium wearing the Yellow Jersey.

“Clearly it’s frustrating and a small setback for my Tour de France preparations, but there’s still plenty of time before we start in Brussels in a few weeks’ time,” added Thomas.

“We will recalibrate and I’m sure my coach Tim (Kerrison) will have a plan in place to ensure I’m ready for July 6th.”

Team INEOS doctor Derick Macleod said: “Geraint took a heavy fall. The main area of impact was to his head.

“He passed his initial concussion roadside test but with the nature and severity of the impact, it was felt unsafe for him to continue in the race. He was taken to hospital and thankfully all the X-rays and scans have come back clear. He’s now back in the Team hotel and in good spirits.”

He added: “He’s been given the all clear which is great but we will continue to monitor him over the next few days.

“Knowing Geraint, it won’t take him long to get back on his bike but we’ll need to ensure he’s symptom free in the next few days before he does so.

“We’re optimistic he’ll make a full recovery over the coming days though and all being well he’ll be back on his bike very soon.”

Thomas went into the fourth stage in eighth place before the crash around 25 miles from the finish.