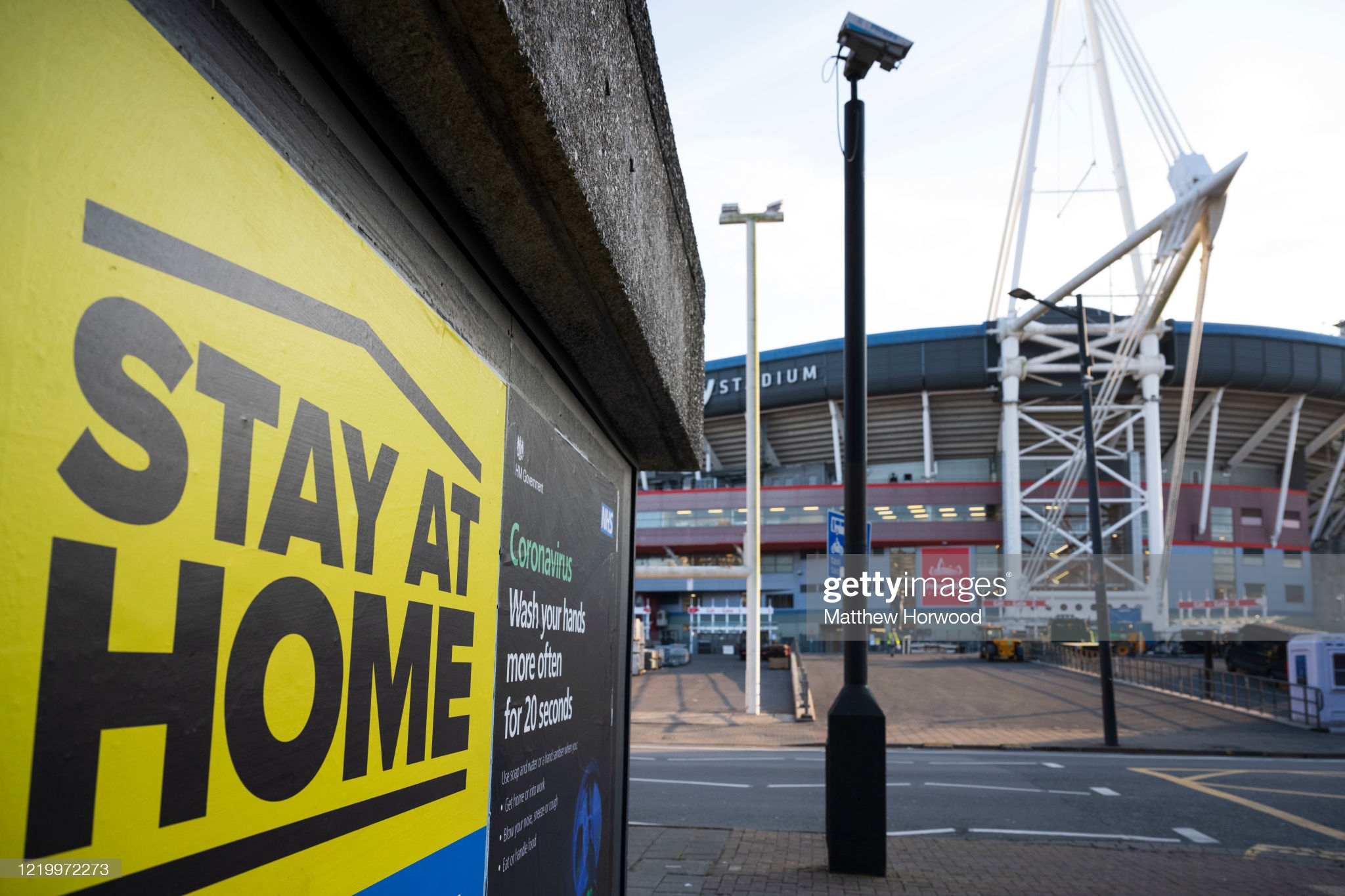 Welsh sports fans are being told to stay away. Pic: Getty Images.

The Welsh Rugby Union remain committed to playing their Six Nations matches in Cardiff and are hoping there is a “domino effect” of relaxed restrictions.

Although the WRU have looked at contingency plans to move their matches into England – rather than play them behind closed doors – their priority is to convince the Welsh Government that their three matches can be safely hosted at the Principality Stadium.

At present, restrictions imposed by Mark Drakeford’s government mean the three games against Scotland, France and Italy have to take place without fans due to fears over rising Covid rates.

If those matches were to take place in an empty stadium it would mean the loss of a likely £20m to the WRU – a potentially ruinous blow, coming on top of the £14m missed out on by not hosting two home tournament games in 2021.

Union officials have looked at possible solutions – such as moving their games to the Tottenham Hotspur Stadium in north London and elsewhere over the border, but their hope is that restrictions start to ease over the next few weeks as the NHS in Wales copes under the strain of Covid admissions and staff absences.

Ireland and Scotland are the first countries in the firing line as they are both due to host matches under restrictions on the opening weekend on February 5.

Ireland would currently have to play in front of only 5,000 fans at the Aviva Stadium in Dublin because of their country’s restrictions, while the Scottish Government’s rules mean only 500 fans would be present for their match at home to England.

But the WRU are hopeful that if Ireland and Scotland relax their rules over outdoor events – even if some indoor restrictions remain – then the Welsh Government will follow suit.

Up to 15% of NHS staff at some health boards are off work as record Omicron cases cause disruption to services across Wales.

On average Wales has seen 8,948 Covid cases a day in the last week, almost double that of the week before.

NHS Wales boss Judith Paget said “every department” of the health service was under strain.

Former Lions and Scotland coach Sir Ian McGeechan has suggested using venues such as St James Park in Newcastle for the Calcutta Cup game, with currently no restrictions on crowd numbers in England.

Newcastle United’s stadium was used for the 2015 World Cup, with Scotland facing South Africa and Samoa there.

Writing in his Daily Telegraph column, McGeechan said: “No one wants to see the Six Nations go behind closed doors again. Last year’s championship was a pretty soulless affair, and it has been wonderful to see crowds back in stadiums again in recent months.

“In an ideal world, that is what we would have over the next few months. But this is not an ideal world. It is an ever-changing situation and going behind closed doors might ultimately prove to be the ‘least worst’ option.

“It would certainly be preferable to cancelling the championship or trying to shoehorn it into a non-existent space in the calendar.

“Remember the vast majority of fans who enjoy the Six Nations are not at the stadiums but rather watching on TV. And playing behind closed doors would obviously mean they could continue to do so, while allowing unions to get the much-needed television money.

“But I would like to see the Six Nations exhaust all possibilities first, to allow as many fans as possible to attend. Crowds are what give games energy.

“The possibility of moving matches to English venues is certainly intriguing. For Scotland, where the maximum capacity at outdoor games is 500, and Wales, where no fans are allowed at all, the possibility of playing at St James’ Park or the Ricoh Arena would surely be preferable. And there are currently no legal restrictions preventing fans from crossing the border.

“It would require sign-off by the respective governments. And it is difficult to see how the Scottish government, in particular, would allow it given it recently tried to stop families crossing the border to celebrate New Year’s Eve. But it is worth a conversation.

“For Ireland and France, the situation would be trickier still given travel restrictions, particularly in France. But again it would be worth a conversation. They might prefer to have full houses abroad than sparse crowds at home. Last year’s Rugby Championship even highlighted the possibility of hosting a tournament in one country alone (rounds three to six were all played in Queensland), keeping the players in bubbles throughout.

“That was by all accounts mentally very draining for the players, staying in bubbles for such a long time. You could investigate hosting the Six Nations over a shortened time – six consecutive weekends – to mitigate against that, although that brings problems in terms of recovery and so on.

“Time is running out to organise anything like this. And there would be valid questions of fairness for fans who have bought tickets to home games on specific dates, and for teams who would not be playing at home. England would also have the huge advantage of playing their home games at Twickenham in front of a full house.

“But the possibility must surely be explored, at least for Wales and Scotland. As a player, given the choice of playing in an empty stadium at Murrayfield or a full house of Scots just over the border, I know which I would have chosen.”