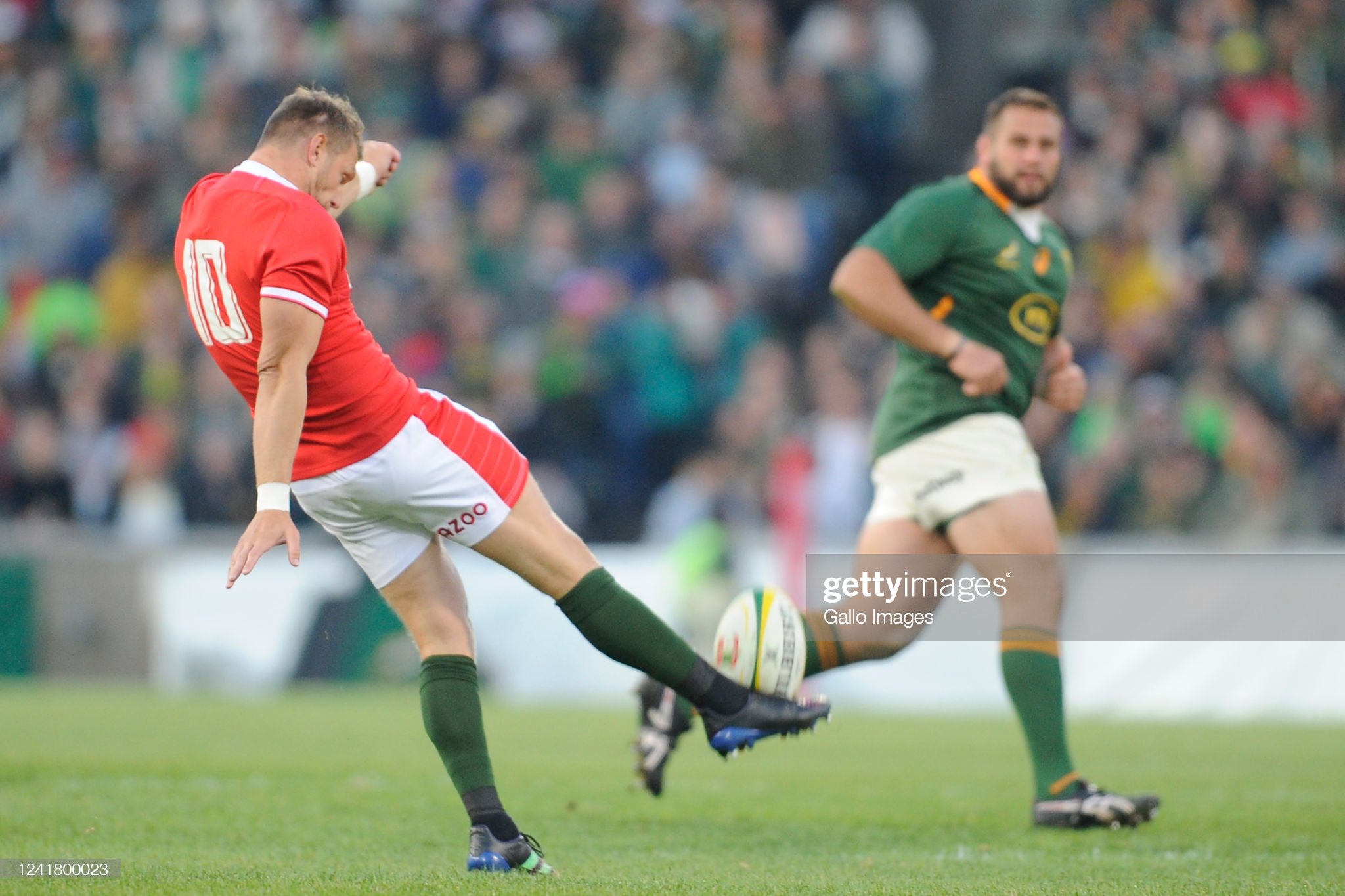 Dan Bigger believes the World Cup can be won by anyone. Pic: Getty Images.

Wales captain Dan Biggar feels the 2023 Rugby World Cup will be ‘very much a level playing field’ after a triumphant weekend for the northern hemisphere nations.

Biggar and his Welsh team-mates ended 58 years of hurt on South African soil on Saturday by defeating the world champions 13-12 in Bloemfontein.

Meanwhile, Ireland recorded their first victory against the All Blacks in New Zealand, while England felled Australia in Brisbane and Scotland saw off Argentina away from home.

All four touring teams now go into series deciders next Saturday and Biggar senses a possible power shift as teams prepare for next year’s global extravaganza.

“It is really exciting, looking forward to 12 months’ time or so in France,” said Biggar.

“There is not really one stand-out team going into the World Cup, as there has been the last couple of times probably, where New Zealand have been streets ahead of everyone.

Wales have done it!@WelshRugbyUnion make history earning their first win against the Springboks in South Africa, courtesy of a last-minute try and a touchline conversion 🙌 pic.twitter.com/d44fpG80Xj

“It is very much a level playing field, and anyone can beat anyone.”

A week after pushing South Africa to the limit in the first Test, Wales levelled the series when Gareth Anscombe kicked a touchline conversion two minutes from time after fellow substitute Josh Adams had claimed his 20th Test try.

That sealed Wales’ first victory over the Springboks in South Africa, at the 12th attempt, and came little more than three months after Wayne Pivac’s side’s chastening Six Nations defeat to Italy in Cardiff.

“Credit to Wayne and the management that we probably didn’t over-react to the end of the Six Nations,” said Biggar, who took a blow to his shoulder and went off early in the second half at Toyota Stadium.

“We stuck true to our guns and game-plan in terms of what we are trying to achieve. When you lose, those defeats tend to last for months and months, as opposed to sometimes your victories are over before you blink.

“There have been some very, very good Wales teams to have come here and been sent packing. We are a really tight-knit group, and everyone deserves a pat on the back.”

The result was particularly sweet for match-winner Anscombe following his long fight to overcome a career-threatening knee injury.

The 31-year-old fly-half missed the 2019 World Cup and more than two years of Test rugby before returning against New Zealand last autumn.

“There were so many unknowns and it is just a bit of a ‘pinch me’ moment that I am here. That effort, that kick, is the culmination of so many people’s work.

“I am just glad I was able to step up when I was supposed to and do my job. Maybe I had the rugby gods on my side.”

How it started vs how it’s going 🥰

Wales head to Cape Town for the series decider, but South Africa will be looking for revenge. For Wales the third test could be historic, a series win in South Africa would be one of the great achievements of Welsh rugby.

Wales head coach Wayne Pivac told Sky Sports: “It was a bit like last week hanging in at the end.

“He [Gareth Anscombe] is a quality kicker, I have confidence in him, he missed one but he got the one that mattered.

“The difference this week is we were more disciplined, didn’t concede as many penalties as last week.

“It [conceding fewer penalties] allowed us to stay in the game.

“The boys were so keen to get the job done after last week, we thought we had done enough to win it.

“We’re disappointed we are not 2-0 up, next week will be a huge challenge, it will make for a good series.