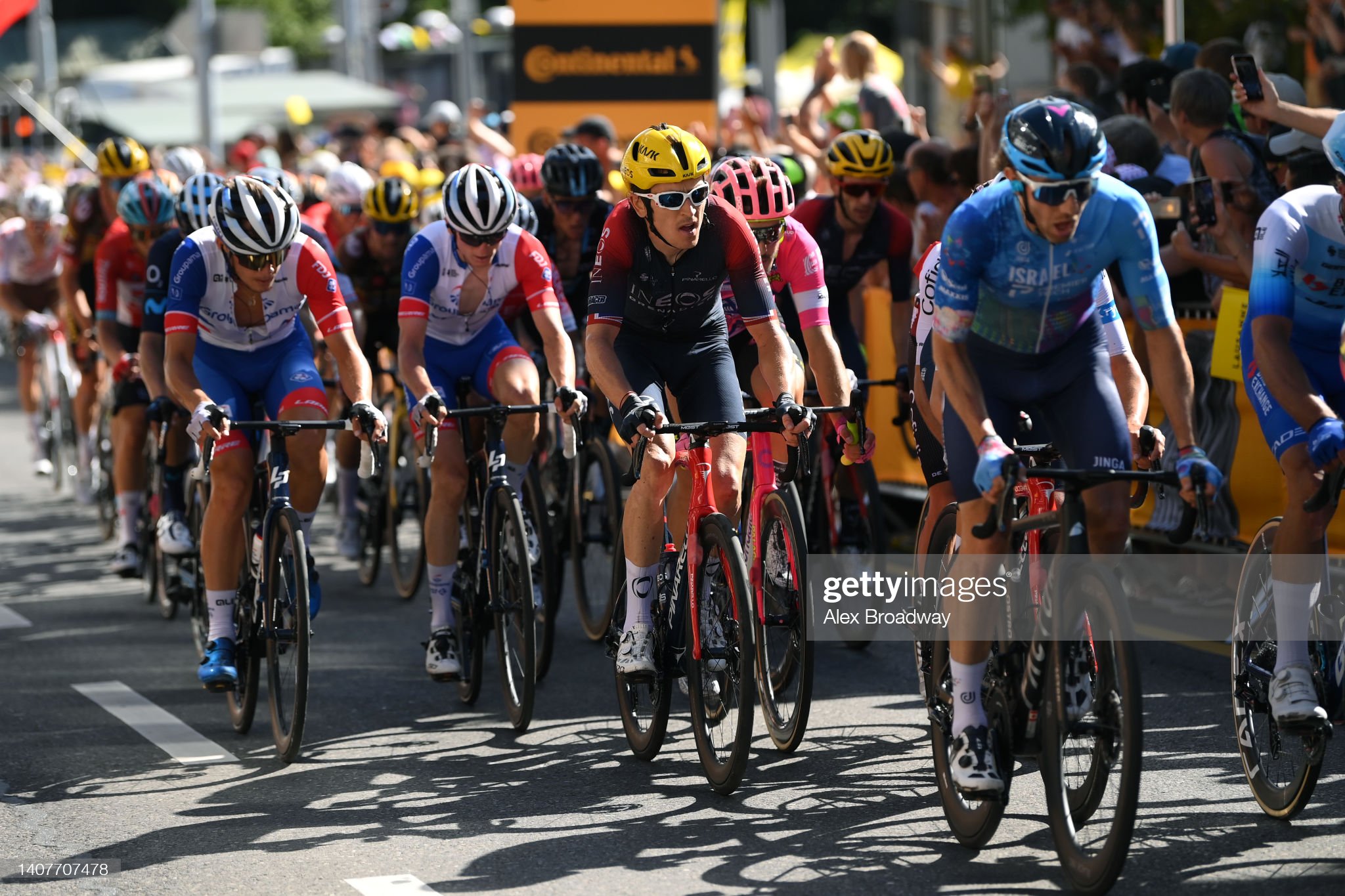 Geraint Thomas still believes Ineos Grenadiers can unseat Tadej Pogacar in the race for the leader’s jersey at the Tour de France.

Rather than a back-up to anyone else, Thomas has quickly emerged as the strongman in his team and is likely to be their recognised No.1 for the remainder of the tour after an impressive stage performance in Switzerland.

The Welsh star sits third in the general classification, 74 seconds down going into Sunday’s mountain stage to the Portes du Soleil ski resort in Chatel.

Thomas is hoping the mountains still to come can be the territory where the Ineos Grenadiers – who have Adam Yates in fourth place overall, Tom Pidcock seventh and Dani Martinez 10th, all within two minutes – can use their numbers against Pogacar, but the size of the challenge is clear.

“He’s lost a team-mate today but I don’t think that’s going to affect him. What can you do? We’ll just try to stay positive and use our numbers later on in the race.”

The Cardiff-born rider, winner of the tour in 2018, says he is enjoying a return to form and fitness in this tour so far, but feels no pressure.

“I’ve won it [the Tour] before and came second, so I don’t have anything to prove,” Thomas said on Saturday.

It’s an epic finish on the seemingly never ending La Super Planche des Belles Filles.@GeraintThomas86 crossed the line fifth to lead us in, 14secs back on winner Pogacar.

Adam, Dani and Tom all finished inside the top 15 today #TDF2022 pic.twitter.com/5csi2JoQvh

“It’s more just having fun and trying to take an opportunity.”

Thomas, 36, is poised in third overall at 1:14 behind race leader Pogačar, and said the looser, more open style that the Grenadiers is adopting this year suits him just fine.

“It’s not as structured as it maybe was in the past, there’s a bit more flexibility there so it’s all good so far,” he said.

“Yesterday was a good day and it’s just enjoying racing with the team.

“I’m feeling good. The team’s riding well and we’re all working well together.

“That’s why I was a bit annoyed after the TT and Roubaix stage because I felt like I had good legs but for one reason or another I couldn’t quite get it all out.”

Wout Van Aert and Pogacar once again took the glory on stage eight of the Tour as Van Aert snatched his second victory of the week and Pogacar extended his lead in the yellow jersey.

Back to the mountains today. I’ll try channeling the @WelshRugbyUnion boys 💪💪 #TDF2022 pic.twitter.com/CbivntE6nl

After hopes of a breakaway success were extinguished as the race moved into Switzerland, Van Aert had the power to beat Michael Matthews in an uphill sprint to the Olympic Stadium in Lausanne, but Pogacar, ever hungry for success, was in the mix too as he came home in third.

And such is the appetite of a rider who has been compared to ‘The Cannibal’ Eddy Merckx in recent days that the 23-year-old tried to fight for what would have been a third stage win in as many days, and sounded disappointed when he could only manage third place.

“It was not that far away but it was a fun game today,” said the UAE Team Emirates rider said. “It was a long day, getting more hot and there were a lot of dangerous points.

“The last climb I liked. For the sprint maybe I hesitated a bit and Van Aert passed me with super speed. For sure I’m a little bit disappointed but third place is still great.”

The Slovenian can console himself with having used bonus seconds to extend his overall lead to 39 seconds from Van Aert’s Jumbo-Visma team-mate Jonas Vingegaard.

This stage into Switzerland looked ideal for a large breakaway to go down the road and contest the honours, but only three riders – Mattia Cattaneo, Frederik Frison and Britain’s Fred Wright – had gone clear before a crash split the peloton.

Pogacar took a tumble but described it as “one of the softest crashes I ever experienced”. Thomas, David Gaudu and Romain Bardet were among those held up, so the pack sat up to allow a regrouping, leaving three-strong break dangling up the road in a doomed mission.

Team BikeExchange-Jayco, working for Matthews, and Van Aert’s Jumbo-Visma squad dragged them back on the roads to Lausanne, but it was UAE Team Emirates squad on the front as Pogacar rode up the 12 per cent ramps of the final climb in third wheel, making this another general classification fight.

Matthews lit up his sprint first but had to settle for a second second place of the Tour while Van Aert added to his stage four win into Calais after spending four days in yellow earlier this week – extending his advantage in the points classification in the process.

“Of course I’m super happy with the points for green up for grabs today,” the Belgian said. “Today was a big chance to take a lot of points from my competitors and I’m really pleased my team put everything into chasing down the breakaway. Then you have to finish it off.”

Pogacar lost team-mate Vegard Stake Laengen before the start, one of two riders along with Geoffrey Bouchard to test positive for Covid-19, but neither that nor that early crash could do anything to shake his grip on the race as he seeks a third consecutive title.