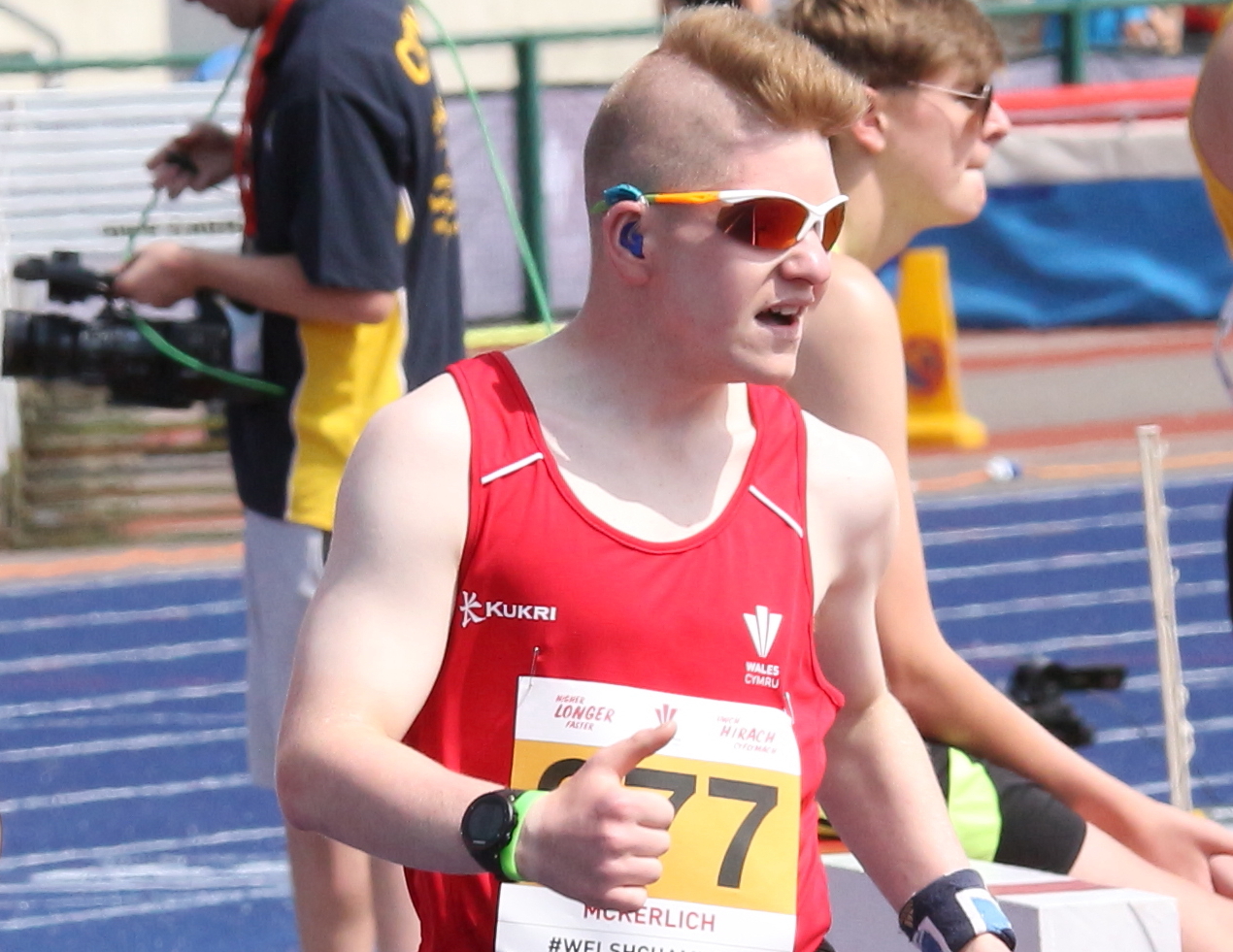 Race Walker Daniel McKerlich in action at the Welsh Championships.

A teenage race-walker is organising his own para athletics meeting in Cardiff to give fellow disability athletes the opportunity to compete against each other.

Daniel McKerlich, who competes in the T20 category for people with learning difficulties, has spotted a need for a competition in Wales exclusively for disabled athletes.

The 19-year-old hopes his Para Athletics Event 2020 will attract some of Britain’s top para athletes as they prepare for the Tokyo Paralympics and go in search of qualifying standards.

Wales has a proud history of producing top para athletes, including the likes of Aled Davies, Hollie Arnold and Sabrina Fortune, who all returned from last year’s World Para Athletics Championships in Dubai with gold medals.

However, aside from the major championships, disabled athletes often have to pit themselves against competitors from outside their classification groups or able-bodied opponents.

While this in itself brings a number of benefits, it doesn’t give athletes an accurate picture of their progression within their own categories.

McKerlich told Daisport: “I feel disability athletes don’t have enough opportunity to compete against people in their own classification group.

“Disabled athletes more often than not compete against able-bodied athletes in mainstream events. This doesn’t give a true indication of their progress throughout the season.

“So, when they go to a championship, they don’t know whether they are going to do well or not because they have been racing against able-bodied athletes.”

Daniel speaks from personal experience. The vast majority of events he competes in are able-bodied events due to the low number of competitors and opportunities in his classification. As a result, he won’t be competing at his own meeting.

“There aren’t many people who do race walking in the T20 category, so I mainly compete at mainstream race walking events,” he says.

Despite this, he is determined to give other disabled athletes the opportunity to compete at a fully-fledged para event in his home city.

Thanks to support from his club, Cardiff Athletics, along with Disability Sport Wales, British Athletics, British Para Athletics and individuals within the Welsh athletics community, McKerlich has all the infrastructure in place for the meeting, which will be held at Cardiff International Sports Campus in Leckwith on May 17.

All performances will be registered on the Power of 10 website and count towards UK and international rankings, making them eligible for use as Paralympic qualifying marks if they meet the standards.

Now Daniel is hoping para athletes of all abilities will support the meeting by entering in large numbers.

“We’re trying to get competitors from all over the place and make the event as big as it can be,” says McKerlich.

“We hope that once a few of the more recognised athletes have entered this will start to encourage a lot of other athletes to enter.

“As athletes know their results are going to be going on the Power of 10 website they will be able to use them as qualifying time for the Paralympics. There will be prize money for British, European and world records.”

The event is open to disabled athletes of all abilities and experience. A classification day will be held on May 16 at Cardiff’s National Indoor Athletics Centre, where new para athletes will be given the opportunity to be classified in line with their physical impairment.

British Athletics Paralympic talent development coordinator Job King, who McKerlich is liaising with to organise the event, says this is an important ingredient. “It’s a one stop shop, we trialled it last year, it’s what happens internationally where everything is done within a competition.

“It means that in one weekend an athlete can be classified and go onto the rankings, where previously they would have had to give up two weekends – one to be assessed and one to compete.

“So that’s a nice touch. There’s always a constant flow of athletes coming through, certainly within Wales, you’ve always had a good churn of new athletes.

“For those athletes, if they are able to compete against Paralympic athletes, they will have someone to look up to at the same time. Quite often, they may not have competed against another para athletes before.”

Athletes without classification will also be allowed to compete, but their results won’t be counted for ranking purposes.

King is full of praise for the Cardiff race walker’s efforts to stage the event in his home city.

“Daniel has noticed a gap that there hasn’t been a central disability meet in Cardiff for a little while.

“Welsh athletes compete within other competitions, so I wouldn’t say there was a lack of events or profile, but he has spotted that there is an opportunity to showcase Welsh athletes of all ages and abilities and to bring in athletes from outside the region.

“He’s doing a really good job for his first attempt, and on top of that he has a learning disability as well, so to take on all of this myriad of competition jargon and turn it into practice, I think he has done a really good job.”

King is encouraging all athletes, especially those from the locality and further field in the UK to get involved.

“I don’t know how many overseas athletes will come because it’s a one day competition but I would to think there will be GB international athletes there because it is Paralympic year.

“It’s on their doorstep and there is enough time between now and then to get it into their schedule. They need to lap it up. Daniel is pulling all the strings so hopefully it will be successful and something that can continue.”

I am going to be hosting a para’s athletic event which is in the UK on the 17th of May 2020. It is being run through my athletics club cardiff athletics and licenced by uka and is a WPA event and a chance to qualify for tokyo.

McKerlich is also hoping to attract sponsors to help cover the cost of the event, which he estimates will be around £10,000 in total.

A Just Giving Page has been launched to help raise funds which will help keep the entry fee as low as possible. McKerlich already has the support of the Co-op Supermarket where he works, which will be supplying water and refreshments for officials and athletes.

“I will also charge an entry fee of £15 to all athletes,” he says. “This entry is a one-off fee and covers as many events as they would like to compete in. A small gate fee will be charged for spectators to come and watch the event.

“This charge includes a programme which sponsors can advertise in for free. The number of entries I get for this event will help to reduce the overall cost.”

Anyone wishing to donate to the event, can visit Daniel McKerlich’s Just Giving Page

Athletes can view the full schedule and enter the event through the Para Athletics Event 2020 page on Open Track.

One thought on “Daniel McKerlich Thought, “Why Are There No Para Events In Wales?” So, He’s Set One Up”