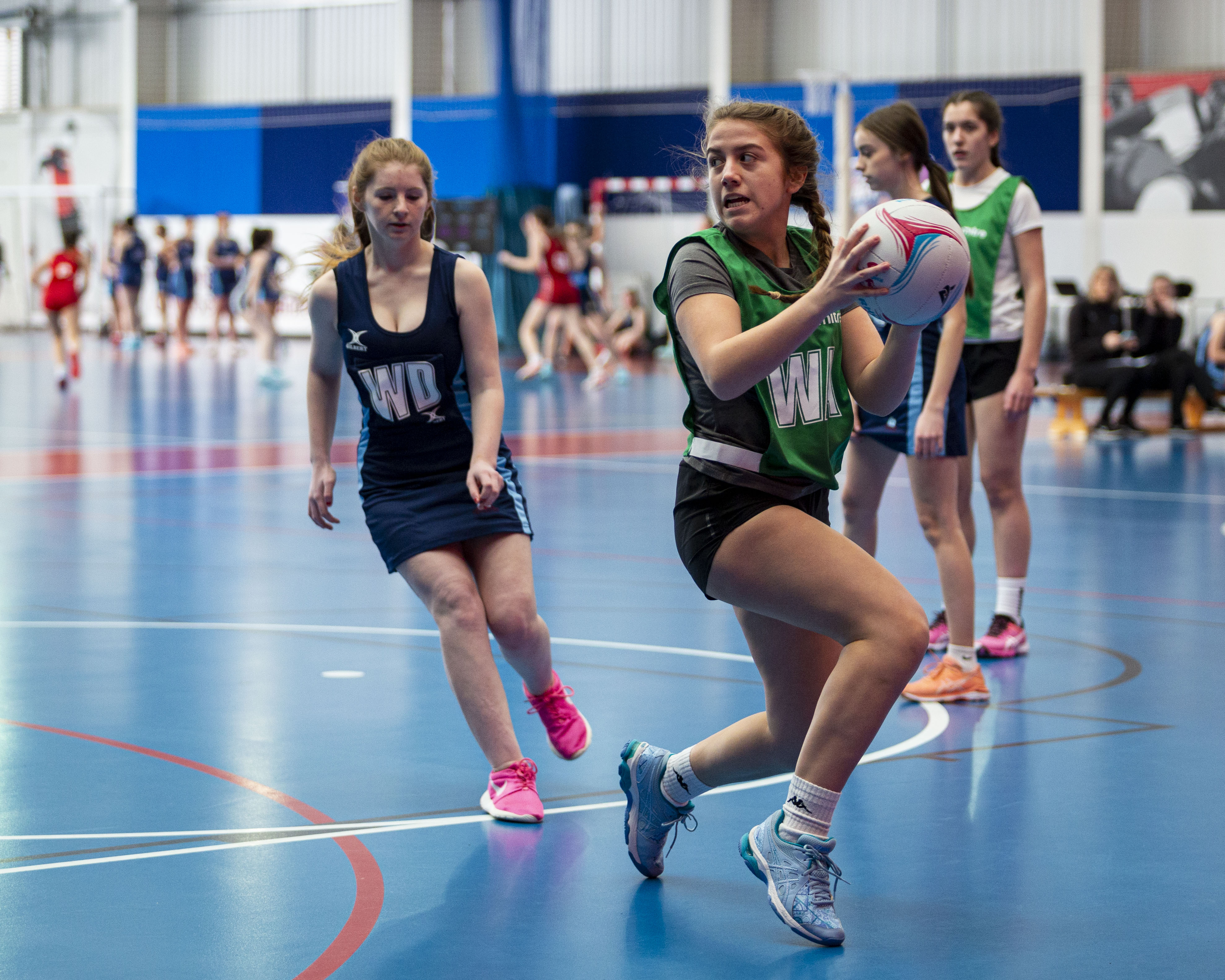 Megan Woart in action for winners Mountain Ash Comprehensive School at the House of Sport in Cardiff. Pic: Matthew Lofthouse.

The year 11 girls won the tournament for the first time to carry off the trophy and £250 prize money – sponsored by Netball Universe – which they intend to put to good use by buying new team dresses.

After watching her side beat runners-up Treorchy Comprehensive School 11-8 after extra-time in a thrilling final, Mountain Ash coach Lynsey Morgan said: “We’ll be using the prize money to buy netball dresses, which the girls are excited about.

“Almost all the teams here had netball dresses, which looked great, so we’ll be getting a set now for our girls.

“We didn’t lose a game all day, so we’re really pleased with the result. The girls really enjoyed themselves, it’s their last year in school, so they’re going out with a bang.”

In a high-quality 13-team event at the House of Sport in Cardiff, Mountain Ash went through Pool A unbeaten and then overcame Ysgol Gyfun Cwm Rhondda, 8-7, in a tense semi-final.

Treorchy’s semi-final proved just as tight as they edged out Ysgol Gyfun Garth Olwg by the odd goal, 6-5.

The final of the Devonalds Solicitors-sponsored event was even more dramatic as Treorchy came from behind to tie the match at 8-8 with just seconds remaining.

But the extra-time period belonged to Mountain Ash as their accurate passing and deadly shooting earned them a deserved victory, under the guidance of co-captains Megan Woart and Mollie Phillips.

A delighted coach Lynsey added: “I’m very happy – they played really well. They think I doubted them, but I really didn’t. They are a brilliant team – individually and collectively and they all played so well.

“We don’t play that regularly against the Rhondda schools, so I don’t think they knew that much about us. That played in our favour and the pressure wasn’t really on us.

“It was a really good final and it’s so nice to see all the girls playing well and competitively.  I’m glad I’m not one of our shooters, because the pressure really was on at the end!

“But it’s been a brilliant event and we’re already looking forward to coming back next year. Hopefully, we can get more teams coming from the Cynon Valley. Only two came this year, but I’m sure now they will all want to be here next year.”

The result meant Treorchy walked away with the runners-up prize of a set of bespoke Vision netball dresses for their school.

The victory was a fitting farewell for the Mountain Ash schools side, although most plan to carry on playing netball for Cynon Valley Netball Club next season.

Skipper Megan – who will join the netball academy at Nantgarw College where she will study for her A-levels – said: “This is the only schools tournament we have all year. It’s a shame because there should be way more events like this.

“We were confident. We knew we had a good team, but we didn’t expect to win. But we like being the underdogs and we thought we might have a decent chance as we all play club netball and this was maybe our time to shine.

“It was a very intense final, though, and when it went to extra-time my heart was beating!  But we came through and we’ve really enjoyed it. We’re over the moon.”

Rhondda Netball operation manager Jody Barnes said: “The standard of play has literally grown so much over the last few years and the talent coming out of these schools is immense. There are definitely a few netball superstars in the mix.

“The competition was amazing. The best part was having so many secondary schools from within RCT get involved. Rhondda Netball mainly works within Rhondda, but through the schools work we get the opportunity to engage with secondary schools throughout Cynon and Taf, too, which is awesome!

“It’s great to run events that are so much appreciated by schools, staff and pupils. It goes to show that we are fulfilling a need for in-school competitions and leagues in our area, which we love doing.”