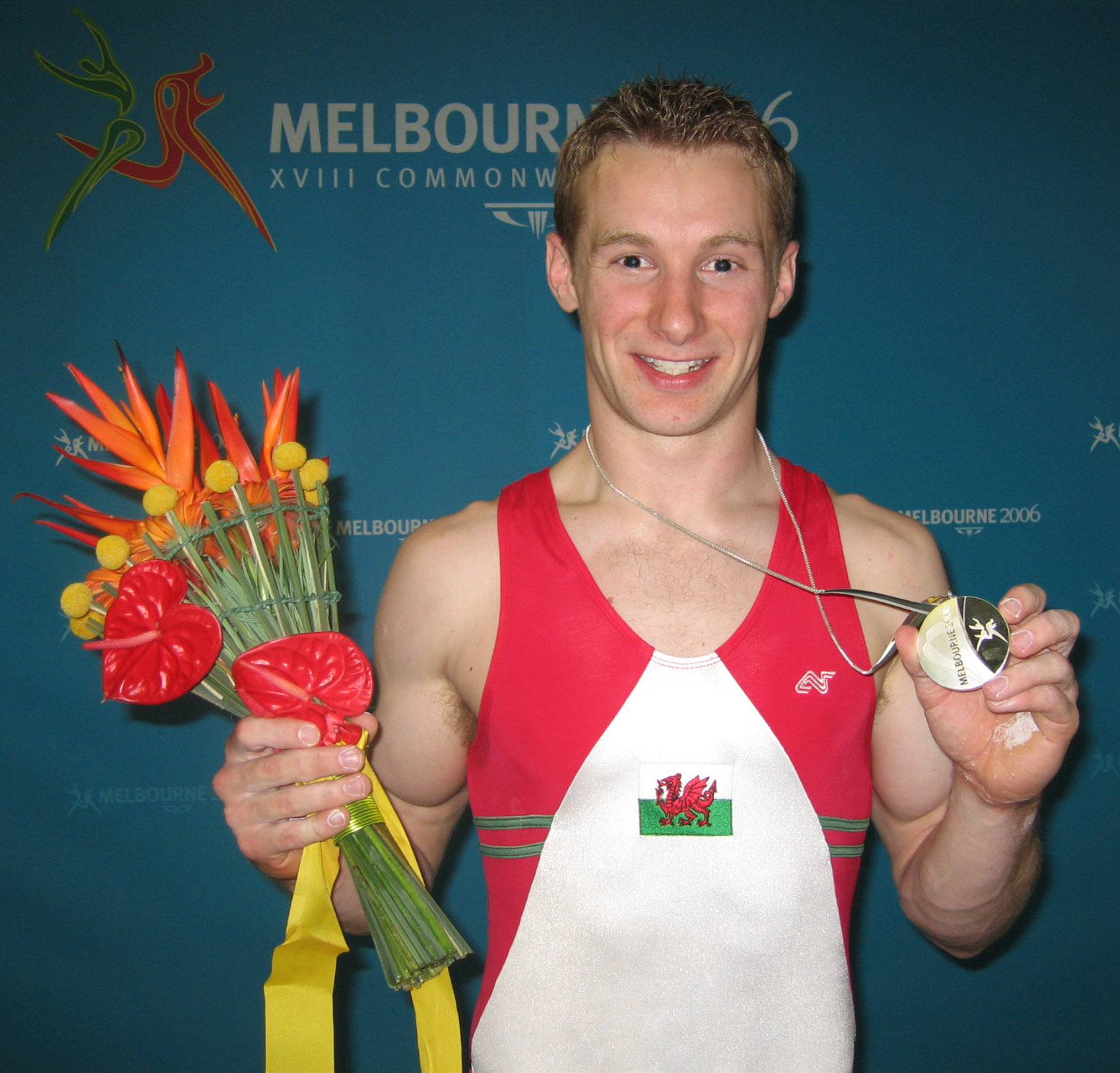 David Eaton after winning silver on the high bar at the 2006 Commonwealth Games in Melbourne. Pic: Welsh Gymnastics.

David Eaton set himself the goal of competing for Wales at the Commonwealth Games when he was 13 years old.

It was the summer of 1994 and he was sat in front of the television at his grandparents’ house in North Wales.

It was a goal the gymnast would go on to achieve – and a lot more besides.

Eaton competed in Kuala Lumpur in September 1998, just a few days before his 18th birthday, and would go on to represent Wales at two further Games; Manchester 2002 and then Melbourne in 2006 – where he made history in securing a silver medal on the high bar.

It was – and remains to this day – the first and only medal won by a Welsh male gymnast at the Commonwealth Games.

Eaton also remains one of only three gymnasts who have had the honour of competing for Wales at three separate Games, alongside Clinton Purnell and rhythmic gymnast Frankie Jones.

“To be honest, I wasn’t aware I was only one of three Welsh gymnasts to achieve that, so that is a cool fact,” says Eaton, who, despite originally hailing from Hinckley, a market town in south-west Leicestershire, fully embraced his Welsh background.

“It certainly makes me proud, but I always was when representing my country at all levels.

“Although born and raised in England, when we piled into the car as a family to visit grandparents, uncles, aunties and cousins, we were always ‘going home to Wales’.

“My parents were born and raised in Flintshire and so it was really special when I competed and won my first Welsh title down the road in Buckley a year later (1995) with nearly all of my extended family present.

“It was a pivotal moment that engrained the pride involved in being Welsh.”

By 1994, Eaton was representing Great Britain as a junior for the first time; he would go on to compete as a junior and then senior across four European Championships, as well as two senior World Championships and three World University Games.

But it’s those three Commonwealth Games competing for Wales that remain so special.

“The memories are truly endless and so varied,” he says.

“With Kuala Lumpur in 1998, I was 17 and it was my first Games of any kind, so everything was so new and exciting.

“From receiving the big bag of kit, to meeting rugby legend Jonah Lomu, to getting to chat with Prince Philip, and enjoying teammates’ dodgy athlete’s village haircuts.

“The highlight by far, however, was the opening ceremony and walking from the holding area into the stadium; local spectators packed the streets, then walking into the stadium of 100,000 roaring people – it still makes my hair stand on end thinking about it.”

In the four years between the Kuala Lumpur and Manchester Games, Eaton had made the decision to swap Hinckley for California, taking up a life-changing opportunity of a full athletic scholarship to attend Berkeley.

Although admitting the decision could ultimately have impacted his dream of competing at an Olympic Games, he says it was “the best life decision I could have made.”

He returned home each summer and in his first summer back in 2001 was crowned British men’s all-around champion.

And, having also competed at the Worlds later that year, he had high hopes heading to Manchester the following year – before an injury sustained on the eve of the Games ruined his chances of home glory there and meant he could only compete on one piece of apparatus.

Reflecting on that experience, he says: “Manchester 2002 was a completely different experience, expectation was much higher, really from myself, as I went into the Games as reigning British all-around champion and wanted success so much.

“This was really to my detriment as it distracted from really enjoying the experience and performing optimally. A bad knee injury sustained while tumbling the day before podium training put me out of action.

“It was the hardest moment of my career, compounded by knowing that friends and family were coming to support me.

“I felt a wave of disappointment and it took some time to come to terms with the missed opportunity.”

He would gain redemption with that silver medal four years later, but the road to his third and final Games in Melbourne wasn’t straightforward, either – including 18 months out following shoulder surgery.

He returned to fitness and got firmly back in the groove, including gold medals on the floor and the high bar competing for Wales at the 2005 Northern Europeans in Northern Ireland six months out from the Games.

Eaton headed Down Under as the sole male gymnastics competitor for those Games.

“I returned more driven than ever to get Wales a first medal in men’s gymnastics,” he says.

“Throughout my international career I had always received so much support from Welsh Gymnastics and Sport Wales, I very much wanted to return the favour for this unwavering support; I knew this was my last opportunity.

“I flew in directly from California, as the sole male gymnast for Wales. I was quietly confident and somewhat of an unknown quantity as I had been in the US completing my studies in the run-up to the Games.

“Everything about Melbourne was first class; Team Wales had made huge organisational changes since Manchester and the positivity around the camp was something that I remember the most.

“Melbourne was a really enjoyable experience. It was a shame not to have any teammates with me, but it forced me to mix with athletes from other sports more than I probably would have otherwise.

“The people of Melbourne have a true respect for athletes and easily packed out the Rod Laver Arena for every session.

“I was disappointed about falling on pommel horse in qualification, as I had the potential to medal, but was happy with having qualified in first place on high bar.

“The finals seemed to take forever!

“With men’s high bar being the showpiece last event to go and my only event final, it felt like a long wait, but I told myself to just enjoy the experience and soak it all in – I was ready, confident and relaxed.

“I chose to listen to Manic Street Preachers’ song ‘Australia’ on the bus on the way to the gym, I thought it was fitting!

“I knew if I hit my routine I would medal and, although out of the three high bar routines I performed in Melbourne (qualification, all-around and final) the final routine was actually my weakest performance, I was relieved to have made it through the routine without a major error, and sticking the dismount never felt better!

“Returning to the village and to the awaiting Welsh delegation was as close I have ever felt to hero status!

“Getting to fly home in First Class as a medalist wasn’t too bad, either!”

Eaton retired as an elite competitor shortly after his final senior international, the 2007 European Championships in Amsterdam.

He has, though, remained immersed in the sport in the years that have followed as a Brevet judge and a coach, while he is also managing director of his own gymnastics apparel business, TURN, which he founded in 2011.

He lives in California with his wife Tara and their young daughters, Nia and Seren.

So how does Eaton look back on his gymnastics career now?

“Really mixed and, having the power of hindsight, I look back with many what-could-have-been’s ” he admits.

“Missing out on an Olympics was and still is hard. I look back, however, mainly with pride; having become Welsh and British all-around champion, winning a Commonwealth medal, receiving an athletic scholarship to study at one of the top universities in the world, and getting to travel the world and make so many friends who share the same passion for the sport.

“The wins outweigh all the low and tough times. I certainly enjoyed the grind of training, perhaps more than actually competing in a way. But being competitive, I do still think of those missed opportunities!”

Eaton remains a supporter and keen follower of the sport back home and will be watching this summer as the Welsh men’s team head to Birmingham with their sights set firmly on creating some history of their own.

“I have loved following the rise and the steady improvement of the Welsh team.

“The Welsh program has been nicely stabilised and elevated under Pete Haysham, giving our men’s team a platform to compete at their best.

“I think the team should travel to Birmingham full of confidence as, on their day, they have a chance to do something special. I certainly will be cheering them on.

“It is a team nicely balanced with experience and age.

“I’m sure Brinn (Bevan) will head to Birmingham with a fire burning and point to prove and I’m excited that Joe (Cemlyn-Jones) is really hitting his stride recently and looking like a really exciting prospect.

“Josh (Cook) comes off the back of a long season here in the US which really helps with routine stability and confidence. I’m sure he’ll bring back some of that loud, passionate team camaraderie to the Welsh team!

“Most exciting, however, is the potential the team has.

“There certainly should not be any doubt that a team medal is a realistic target.”