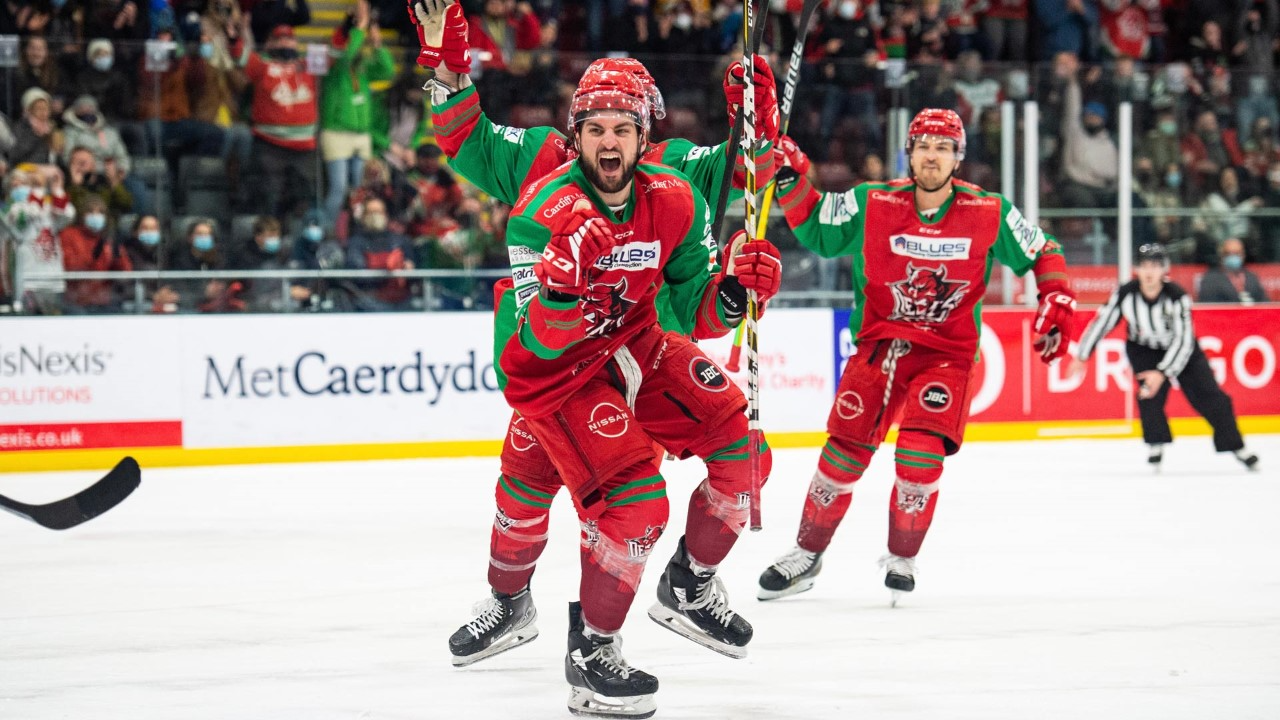 The Cardiff Devils needed to find a way and Jarrod Skalde’s team did just that on Saturday night, as the Devils power play came up big and delivered three crucial goals to help claim a hard-fought 4-2 win over the Belfast Giants.

It was the second time this season that the Devils were able to take maximum points off Elite League heavyweights Belfast, and for the second time, it was a game in which could so easily have gone the other way.

With Belfast in control of the puck for large segments of the game and heavily outshooting the Devils 47-23, it was the Devil’s highly efficient power play and strong goaltending that frankly, got them out of jail.

Although there is still work to do, the Devils are on a promising run of five-straight wins. The recent sequence has seen them take points off two expected title contenders in Sheffield and Belfast, and some of the team’s new arrivals are really beginning to make their mark in a Devils jersey.

Brandon McNally scored twice, Brodie Reid had a three-point night (one goal, two assists) and Justin Crandall had two assists as the Elite League’s best power play – at a whopping 33.33% – nudged the Devils in front in the closing stages.

Belfast went through the gears as they piled on the pressure, but they found Devils goaltender Mac Carruth in irresistible form, as he made 45 saves to earn his fifth league win of the season.

“We’re satisfied with the outcome – special teams were a big difference in the game and Mac Carruth had to make saves all night long. They carried the pace of play most of the night and it came down to our special teams scoring those power play goals” said Skalde post-game.

JJ Piccinich opened the scoring for the Giants, with a power play goal of their own late in the opening period, but there was still time for Devils sharpshooter Brodie Reid to quickly reply on a Devils power play.

Reid arrived this summer after posting 60 points in 60 games in United States’ East Coast Hockey League and the right-shot has already made a huge impression on Cardiff Bay. His goal last night was his 11th in as many games in the league, taking his total points for the season a league-best 16.

And whilst Reid is finding the net, it’s Justin Crandall who is making the plays. It’s no coincidence that Crandall’s improved performances have coincided with the Devils upturn in form. Crandall finds himself on a five-game point-streak during which he has posted nine assists (another league best).

McNally added his eighth goal in eight games, to put the Devils 2-1 ahead on the man-advantage. That proved to be the only goal of a second period that saw the two teams cancel each other out for large parts, before Piccinich scored his second goal midway through the final period.

With little over five minutes of the game remaining, McNally pounced for his second, and a third power play goal of the night, to put the Devils 3-2 ahead in front to cue up a tense finale. The Giants ramped up their offensive output but Carruth continued to raise his game to keep the Devils lead intact, and with the hosts running of steam, an exhausted Cox was able to capitalise with an empty-net insurance goal that secured the points.

SENT TO COVENTRY ON SUNDAY
The Devils have little time to rest and today travel to Coventry for tonight’s game against the Blaze, which is to be shown live on Premier Sports TV at 6pm.

Coventry are 5-3-1 and coming off their first overtime win of the season, following last night’s shootout victory over the Glasgow Clan in Scotland.

Josh Curran and Janne Laakonen each posted a goal and assist in that game, while C.J Motte turned away 37 of 39 shots he faced.

Although the Devils have already played the Blaze for times this season in the Challenge Cup (won 2, lost 2), this is the first meeting between the two sides in the Elite League.

Another full slate, where are you watching today? 💬 pic.twitter.com/lhb7iuRYDJ