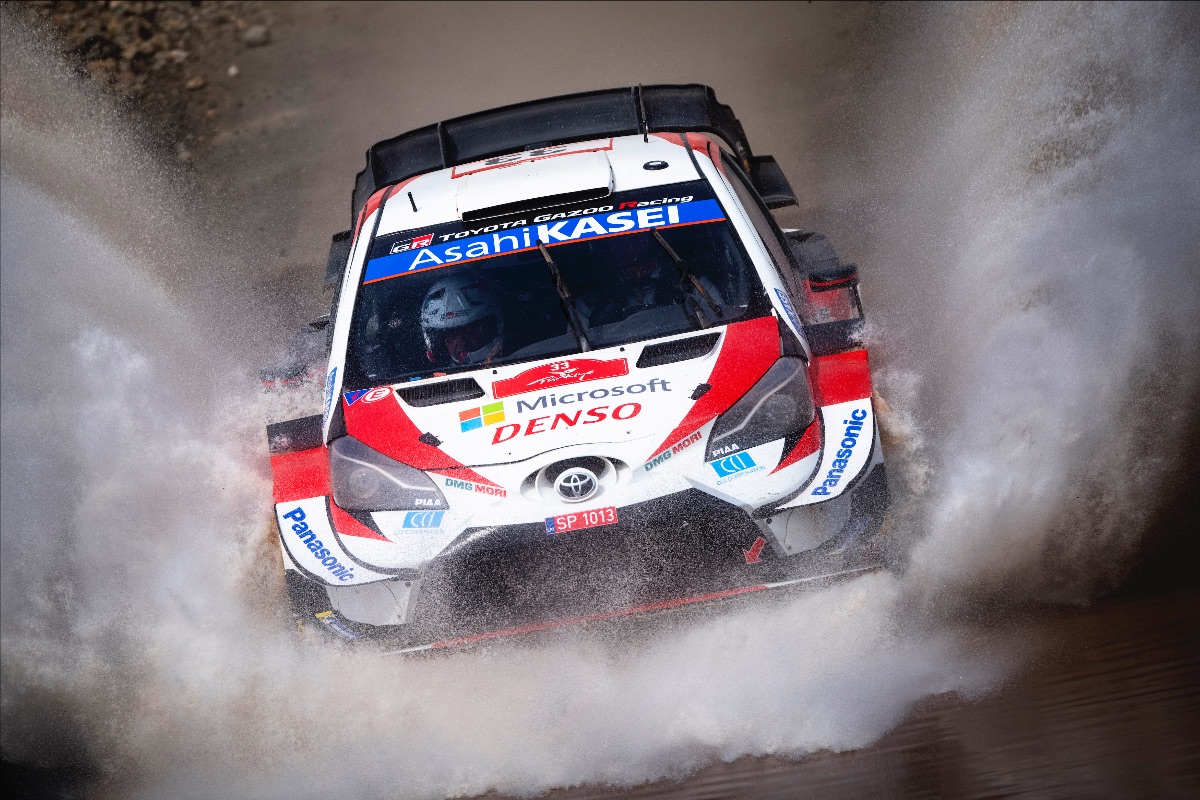 Today’s action sees the Toyota Gazoo Racing driver head away from the Formula One circuit at Rally Monza for six stages in the mountains of northern Italy before returning for a blast around the track in darkness.

Evans is fourth overall just one place behind his team-mate and closest rival Sebastien Ogier.

Evans has crashed on the stage and will take no further part today.

He and Scott Martin were able to get out of the car after it went down a banking  but were unable to continue on the stage.

It could be a terminal blow to his title hopes and must hope that team-mate Ogier suffers a similar fate.

Ogier – who trails by14 points – passed Evans’ stricken Yaris on the road.

“First reaction – I can’t do the same. It was incredible, there is nothing Elfyn could do,” said Ogier, who is now favourite for a seventh’ drivers title. “I am very sorry for him. The championship is not over.”

Organisers have decided to cancel the stage – meaning the standings are as they were.

Evans – who was on the road when the incidents happened – is still third just 0.8 secs behind second-placed Sordo. Ogier still leads by 6.7 secs.

Next up is SS11 which will have a delayed start.

Gerosa 2 is a rerun of this morning’s stage at just 6.89miles.

The stage – a rerun of the first stage this morning which was the longest of the rally – has been reg flagged after Norway’s Ole Veiby rolled his Hyundai on the icy, snowy roads.

Drivers already on the road will drive through non-competitively while the car is moved from a danger spot.

Both driver and co-driver were able to get out of the car.

Britain’s Gus Greensmith also rolled his Fiesta at a similar spot which is causing the problem, but he is also okay.

“It’s difficult, but things were working quite well in the car. When we got into the slushy snow at the end of SS7 there were a few heart in mouth moments,” said the 31-year-old.

“Obviously there’s a long way to go, and this afternoon will be equally as difficult. We have to keep our heads down and get the most out of every stage.”

Great job by @ElfynEvans @scottmartinat this morning! responding to their team mate when needed, but with out taking to much risk! Exciting afternoon ahead of action! 🏴󠁧󠁢󠁷󠁬󠁳󠁿🤞🏻 @OfficialWRC #wrclive #EE33

Evans was quicker than Ogier for the second stage in a row – though the Yaris WRC driving duo were separated by just 0.5secs after the 13.77 test.

It means the gap between the two is now down to 7.5 secs.

Evans also took more time out of Tanak (five seconds slower) and Lappi (seven secs slower) to give him a bit more breathing space to the cars behind him.

Sordo is almost 10 seconds slower on the stage – and that allows Ogier to again retake the lead in the rally.

But Evans is now within 0.8 secs of taking second place overall from the Spaniard!

At 13.77miles, this is a classic mountain stage, last driven in the 1980s. After starting in Sant’Omoborno Terme, a wide and twisty climb through Valsecca and Costa Valle Imagna leads to the pass at Valcava, 1340m above sea level.

Then there is a long and steep descent to the finish in Torre de Busi, the road becoming extremely narrow in the final section.

This is the stage that could produce the biggest gaps. There are current reports of fog and ice from about six miles into the stage.

Could be major changes in the standings!

SS8 is a much better stage for Evans as he clocked the second best time on the speed test of 7:05.4 – more than five seconds quicker than Ogier who said he was too cautious.

Evans is only edged out by Sordo by 0.4secs and that is enough to give the Spaniard the lead again as Ogier drops to second. Even better news for the Welshman!

“I wasn’t happy with my stage, I think I could have carried some more space in the other areas,” insists Evans. “Not bad, but definitely room for improvement.”

This stage of 6.89miles is one of contrasting halves. The first part is uphill, fast and generally quite wide. After the village of Gerosa, it becomes flatter, with many tricky points before the finish in Berbenno. Expect fast times with the roads looking clear and snow only on the banks.

Evans – who leads Ogier by 14 points – had said overnight that he did not want other cars to get sandwiched between him and Ogier.

“It’s a little bit putting it in other people’s hands let’s say to be like that,” he told DirtFish.com.

“Obviously if we can maintain one position behind Seb that’s fine but if we start to get cars sandwiched between us, that becomes a problem then.”

And it is all change on the opening stage of the day as Evans moves into third place but Ogier blasts his way into the lead.

The six-time champion clocked the fastest time on the stage of 18 minutes 3.1 secs – just over eight seconds quicker than his team-mate.

Ogier now leads by 3.6 secs from Sordo with Evans 13.4 secs behind.

Selvino – at 15.57miles long – is the longest stage of the rally and will be driven twice by the competitors. It includes all the ingredients of a great mountain stage, climbing through 15 hairpins on a wide road to the village that gives its name to the test. The roads gets narrower as it reaches 1100metres above sea level before dropping to the Sambusita and Rigosa junctions. Faster sections through Ambriola and Cornalba villages lead to the finish at Passoni.

The big news overnight was that the top two Dani Sordo and Esapekka Lappi were both hit with 10 seconds time penalties by the stewards for taking the wrong route through a chicane on Friday.

That left Sordo one second ahead of Lappi and just 2.0 secs ahead of Ogier as the crews set-out from Monza. Evans is +7.1 secs down on Sordo.

Evans will be crowned champion on Sunday if he finishes one place behind Ogier even if the Frenchman wins the rally.

Tyres chosen, morning service completed and our guys are on their way into the mountains 👊🏔#Toyota #ToyotaGAZOORacing #YarisWRC #WRC #ACIRallyMonza pic.twitter.com/P3yApkZ9DC