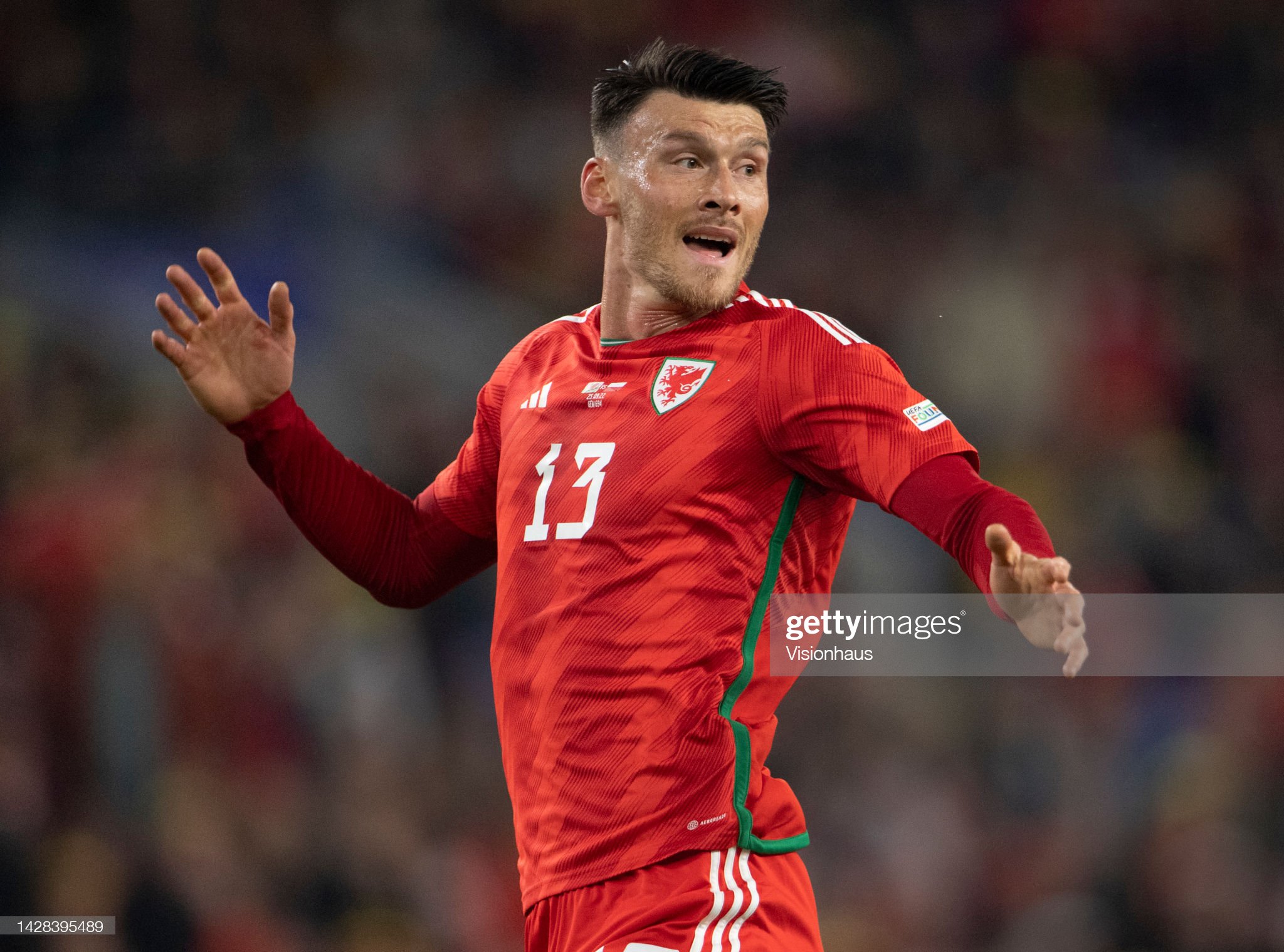 To be sung to the tune of Guide Me O’ Thou Great Redeemer (Bread of Heaven) . . .

He’s actually only 6ft 5in but no wonder Wales fans felt they needed a hymn with which to praise their World Cup-bound striker.

So many supporters have a soft spot for the big man, and not just those who tearfully regret his departure from Cardiff City.

The Bournemouth hit man has embarked upon a remarkable rise from Conference South club Truro City, to leading the line for Wales at the Qatar World Cup.

But can the 30-year-old – who has risen up the leagues, in a true rags to riches story – top the scoring charts for Wales at a World Cup?

Moore, who will likely lead the line for Wales in Qatar, certainly has a good chance of doing so, but will face stiff competition, with the likes of Gareth Bale and Brennan Johnson lining up alongside him.

🏴󠁧󠁢󠁷󠁬󠁳󠁿 | Kieffer Moore off to meet up with Cymru squad before flying to Qatar 😁 pic.twitter.com/l6OoWSEeNZ

So far, Moore has scored nine goals for Wales in 28 appearances. But he has a useful knack of scoring against serious opposition, such as Belgium (twice) and Switzerland in the last Euros finals.

Having juggled life as a semi-professional footballer with work as a lifeguard and personal trainer, Moore will now head to the World Cup finals to represent Wales in their first tournament appearance for 64 years.

Moore realised all his dreams this year. Having suffered a broken foot just days into his January move to Bournemouth, he came back to fire the Cherries back into the Premier League, scoring the £120m goal against Nottingham Forest in dramatic fashion.

Then, he helped Wales secure World Cup qualification for the first time since 1958.

The striker’s rise has been remarkable, but it hasn’t always been plain sailing for the former lifeguard. After a difficult spell in Norway, scoring just one goal during his time at Viking FK, Moore’s career was at a crossroads.

Rumour has it the Forest players are still closing down Kieffer Moore
pic.twitter.com/b8Aa5bzjNW

Following successful spells at Forest Green, Ipswich, Barnsley and Wigan, the rangy forward blasted his way to international honours with Wales, having qualified through his paternal grandfather, from Llanrug.

Moore made his international debut during a 1-0 win against Belarus in September 2019, before scoring his first goal for his country against Slovakia in the October.

He says: “For me, the polar opposite of being at a World Cup was coming back from Norway.

“I had a stint in Norway, playing for Viking, and then I came back to sign for Forest Green Rovers.

“Before that point of returning, I was thinking, ‘I don’t really know where I go from here.’

A year ago today, Kieffer Moore found the equaliser as Cymru drew 1-1 with Belgium at the CCS to secure a home tie in the World Cup play-offs 🥳

“I knew I had to go to a team where I had to shine. For me, personally, going away and not experiencing great times and being away from my family, it re-lit the fire in my belly that I wanted to get everything out of football.

“I’ve always had that faith and confidence in myself to get where I am today. I felt I had a chance in the EFL, then played in the Championship, played in League One, but then I went to Norway and found myself out of the Football League.

Affectionately known by Welsh fans as Kieffer Mawr, he has struck crucial goals throughout his Wales career to date, like his 2019 header against Slovakia, his tap-in against Estonia in Tallinn and his magnificent left footed strike against Belgium last year in the Welsh capital.

But the 30-year-old, who has scored four goals in 15 Premier League appearances this term, will have to adapt his game if he wants to help his team go deep into the tournament.

Moore has got on the wrong side of international referees in recent years, picking up 10 yellow cards in his 28 appearances for Wales.

“I think I have to adapt my game. Having the experience of the Euros and being a yellow card away from missing one of the games was hard.

“But it’s all about adapting and I have learned to use my physicality in different ways.

“I have done a lot of work on the mental side of the game,” says the 30-year-old former lifeguard.

“I’ve read countless books, studied mental approaches and tried to improve myself in that way. I’ve worked a hell of a lot on it to improve the mental side.”

“It means everything to get to Qatar.

“Playing at a World Cup is the pinnacle of football. If I could do that in the same year as playing in the Premier League, then it’s an amazing achievement. It would be a pinch myself moment.”