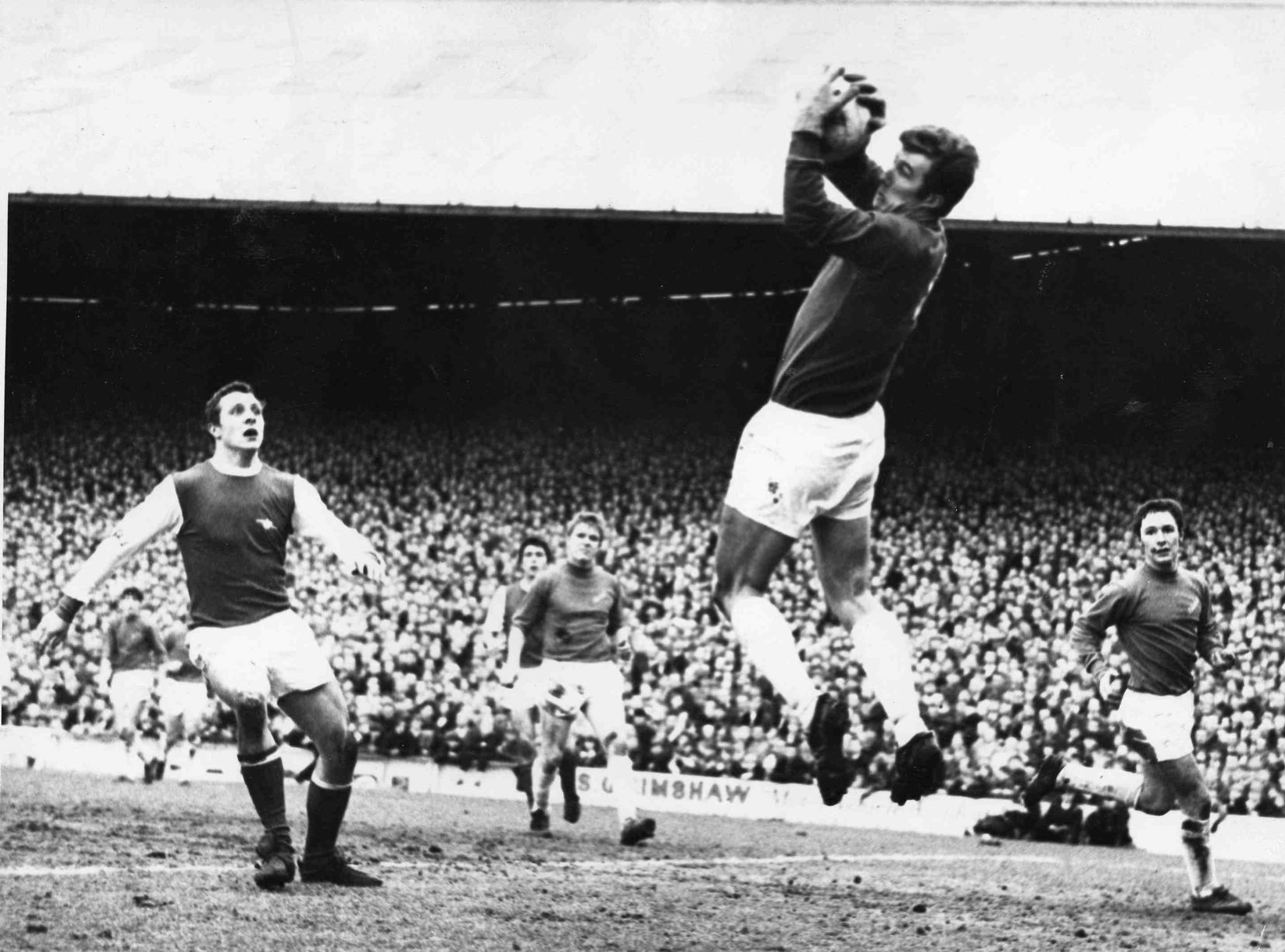 Fred Davies in action for Cardiff City against Arsenal.

Fred Davies – who died last week at the age of 81 – was a former Cardiff City goalkeeper, who claimed a notable hat-trick for the club. He also crossed the great divide to join the coaching staff at Swansea City, but then enjoyed success as a manager in his own right with Shrewsbury, as Terry Phillips outlines.

Fred Davies was a no-nonsense, no frills goalkeeper when former Cardiff City Jimmy Scoular splashed out £10,000 to bring him from Wolverhampton Wanderers to South Wales.

Liverpool-born Davies made more than 100 first team appearances for the Bluebirds and played a key role in three Welsh Cup triumphs.

Almost 13,000 spectators attended Ninian Park for the second leg against Swansea City in 1969, when manager Scoular steered his team to a 2-0 victory on the night.

Davies had made his Football League debut for Cardiff in a 3-0 Second Division win against Portsmouth at home in 1968, while he left the club in 1970 and signed for AFC Bournemouth where he made 134 league appearances.

There are links between Davies and three other Welsh clubs. He played for Llandudno before joining Wolves at the age of 17, while he had coaching roles at Swansea and Merthyr Tydfil FC, where he also ran a pub in the town.

After retiring from playing, he began his coaching career with Norwich City and later had two spells at Swansea.

But he then earned success in his first season in the managerial hot seat – leading Shrewsbury Town to the Third Division championship after being appointed on a full-time basis in January 1994.

He also guided Shrewsbury to Wembley for the first time in their history two years later, but they lost 2-1 against Rotherham United in the Auto Windscreens Shield final.

Former England goalkeeper Bert Williams, who played for Wolves when they won the FA Cup (1949) and First Division title (1954), played a massive role in the career of Davies.

Williams, who was awarded an MBE for his services to football and charity in 2010, first met the teenage Davies during the late 1950s.

So sad to hear that former Blues coach Fred Davies has passed away at the age of 81. Fred was a great goalkeeper at Wolves, Bournemouth and Cardiff. He was assistant to John Bond at Blues and worked closely with the youth players. He was also manager at Shrewsbury 1993-1997 RIP pic.twitter.com/BhkvmsfWlI

“Without Bert, I would never have had a playing career,” Davies told the Wolverhampton Express and Star.

The two men first met at Bert’s sports shop in Worcester Street, Wolverhampton, and it was the start of a lifelong friendship.

“In our day there were no goalkeeping coaches – it was a matter of teaching yourself,” recalled Davies. “I’d gone to Wolves as a 17-year-old with people smashing balls against me and I went to Bert in his shop.

“I’d been at the club for about 12 months and was in the youth team, but I couldn’t see myself learning anything because I had nobody to learn from. Bert gave me reasons for doing what I was doing.

“I always remember saying to him ‘you don’t know who I am’ and he said ‘I do know who you are – you’re Fred Davies’.

“I couldn’t believe he already knew me.

“I told him I needed his help and he replied, ‘Get Jack Dowen [reserve-team trainer] to put a bag of balls outside the away team dressing room on Waterloo Road. I’ll meet you there and take you to Castlecroft [Wolves’ old training ground].

Thanks to Paul Evans and Dean Spink for their time in paying tribute to legendary for Shrewsbury title-winning boss Fred Davies. The former boss in an illustrious and very small company of those to bring title silverware to the Meadow. #salophttps://t.co/TKFBReGMYE

“I learned so much it was amazing.

“He would teach me how to dive for a ball so that I always landed on my thighs and could roll, rather than landing on my backside.

“That way you never suffered injuries to your knees or hips, and even now, at the age of 74, I still haven’t had problems there, so he knew what he was talking about.

“He used to say ‘it’s all about your feet’, saying that good goalkeeping was about footwork. That’s where his agility came in and enabled him to reach balls going into the top corner.

“He was nearly 20 years older than me, but we used to talk about different goalkeepers and their styles.”

It was former Norwich City, Manchester City and Swansea City manager John Bond who encouraged Davies to take up coaching.

“John signed me as a goalkeeper for Bournemouth,” recalled Davies. “He saw something in me and mentioned trying to get my coaching badges.

“He pushed and pushed me because he knew I wouldn’t get a job without badges. The coaching courses were in Cardiff and Tony Pulis was taking his badges at the same time.”

“I owe John everything in terms of coaching and management.”

Bond recruited Davies to his coaching team at Bournemouth and the pair worked alongside each other at Swansea, Birmingham and Shrewsbury.

Their partnership ended when Bond resigned as Shrewsbury manager at the end of the end of 1992-93, allowing Davies to take the top job at Gay Meadow.

He enjoyed success with the Shrews and developed his own, personal style of management.

Shrewsbury Town is deeply saddened to hear about the passing of former manager, Fred Davies.

He loved playing cards with players at the back of the team bus and would enjoy an occasional pint or two with them at the Crown pub in Shrewsbury.

Former Wales international Paul Evans, now a sports massage therapist at Leeds United, played under manager Davies at Shrewsbury and told ShropshireLive: “He was a laughy, jokey kind of guy. Always the joker. He loved his golf as well, he’d be there on a golf day.

“But he would certainly let you know if you weren’t doing it right or pulling your weight.

“He was a Scouser, but he lived in Birmingham. Half a Brummie and half Scouser, he was always going to have a bit of wit about him.”

Fred Davies enjoyed his football life – playing, coaching and management – and will be remembered fondly by Bluebirds fans for that hat-trick of Welsh Cup successes.