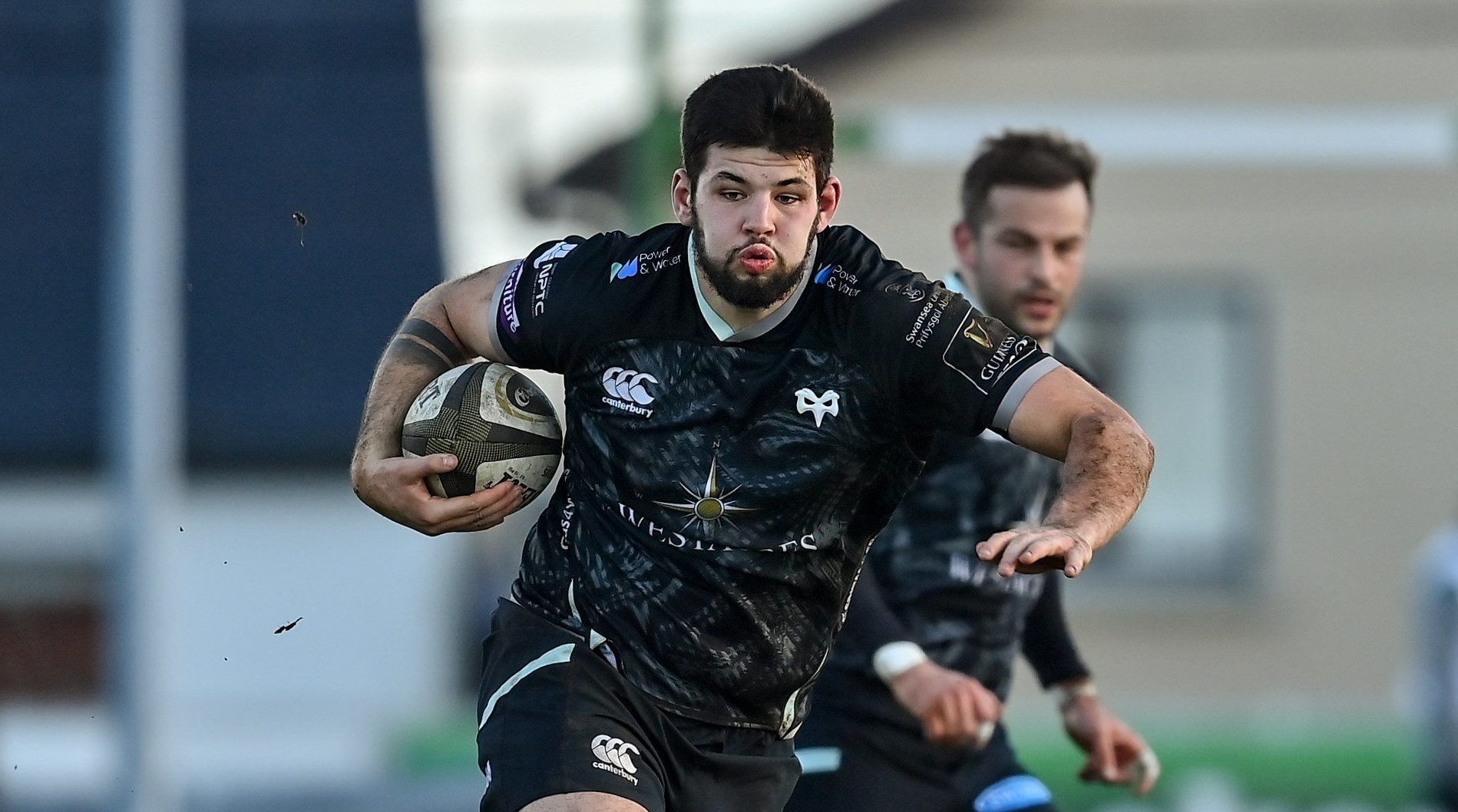 Imagine having to wear Alun Wyn Jones’ jersey when he’s not around. That’s a big shirt to fill. But the young player making a pretty decent fist of it at the Ospreys at present is Rhys Davies. The former Wales U20 player is set wear No.5 against the Dragons on Saturday night and tells Graham Thomas how it feels for size.

Rhys Davies is already being tipped as a successor to Alun Wyn Jones for the Ospreys and Wales but has revealed it was only a few years ago he struggled to get into his school XV.

Admittedly, it was Millfield – one of the most famous sporting schools in the UK – but the young Ospreys second row had high hopes of following the likes of Gareth Edwards, JPR Williams and Chris Robshaw when he moved to Somerset on a scholarship at the age 16.

Instead, the boy from Three Crosses near Swansea was told he needed to work on his game.

He took the advice, made the Bath academy, and has since earned rave reviews in his first season at the Ospreys, with his next outing set to be at home to the Dragons on Saturday night, a game that is live on S4C.

“In my first year at Millfield, I struggled to get into the first team,” says 22-year-old Davies, who has been wearing the Ospreys’ No.5 shirt left behind by Wales captain Jones while he’s away on Six Nations duty.

“It’s quite hard to get into that first team. John Mallett, the head of rugby, told me I had to learn to become resilient and if I didn’t, I’d never get anywhere.

“I think when I first got there I was taking things a bit too easy. John told me to get my head down and work hard. He basically grabbed hold of me and said I needed to take my chance more seriously and that definitely got me on the right track.

“That’s the thing about Millfield. The ethos is about self-improvement. The facilities and the environment is incredible, but it’s you who has to put the work in to make yourself better. No-one else is going to do it for you.

“The gym there is always open, but no-one books you a slot. You have to organise it yourself and learn to take responsibility. It was a good lesson to learn.”

Having been pointed in the right direction by Mallett – the former Bath and England prop – the teenage Davies was ready to respond to other influencers.

When he came though Bath’s academy, he was taken under the long protective arm of Luke Charteris, the former Wales second row who was coming towards the end of his playing days before moving into coaching while Davies was in his final year at the West Country club.

The end of the school year – a chance to be grateful for what has passed and be excited for our future- two incredible captains this year and two with it all ahead of them next year. pic.twitter.com/jgyR8w9pTT

Then, since opting to move back home to the Ospreys a year ago, the 6ft 6in former Wales U20 forward has benefitted from the wisdom of three more international second rows – Jones, Bradley Davies and Adam Beard.

In his nine games so far this season in the Guinness Pro14, and two more in the European Challenge Cup, Davies has proved he’s a quick learner.

“Charts (Charteris) pretty much mentored me at Bath. He was brilliant in terms of on and off the field stuff and he pushed for me to get some first team starts.

“He was just a brilliant role model and when he became a coach, everyone knew their roles and felt 100 per cent clear in what was expected.

“Watching Alun Wyn now at the Ospreys, I’ve learnt that it’s not just about working hard, it’s about working smart – picking up on those little details about what the opposition do.

“Brad works hard on a lot of our line-out preparation and his general outlook is great. You have to have fun and enjoy yourself. That’s crucial and he makes sure we don’t always take things too seriously all the time.”

The Ospreys may have lost last week away to Ulster, but before that they were on a four-match winning streak, which included a 28-20 victory over the Dragons when the teams last met in January.

Davies linked up with Beard in the Ospreys second row that day, while 20-year-old Ben Carter came off the bench for the Gwent region and the two youngsters could again be in opposition at the Brewery Field in Bridgend on Saturday.

“He’s actually a couple of years younger than me, but he’s going really well,” adds Davies of his young Welsh regional rival.

“The Dragons always get themselves up for playing us and this will be just the same. But it’s a good chance for us to cement European rugby for next season, so it’s an important game.

“We think we should be in Europe’s top competition next season, so this, in a way, is a must win game for us.

“We have a massive amount of respect for the Dragons, though. They have had some good results this season and we know we’ve got to be right on top of our game if we’re going to win.”

Live coverage of the Guinness PRO14 rugby match between the Ospreys and the Dragons, from the Brewery Field in Bridgend. English commentary available. K/O 7.35.